To Education Reformers, You Can't Measure Quality With A Ruler 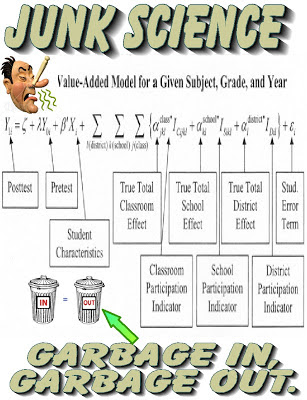 The education reformer obsession of trying to evaluate teachers based upon student test scores has proven to be a failure, time and again.  Starting with Bill Gates, Michael Bloomberg, and Eli Broad,  and joined in by the mass media the education reformer holy grail was to link teacher ability with high-stakes testing.  However, the American Statistical Association found that a teacher only accounted for between 1% and 14% of a student's growth score. In fact, in the Sherri Lederman case the judge found the New York State high-stakes test to be "junk Science"!  Combine that with the rushed and faulty roll out of the age inappropriate Common Core standards and it sparked a parent uprising with 22% of the State's students "opting  out" of the test.

The only reason most states have a linking of a teacher's evaluation to a test is because of the 4 billion dollar bribe the Obama Administration dangled at states who were in a recession.  It was called "Race to the top".
To receive the money, New York State received 700 million dollars, the States had to have some sought of linkage between a student's test grade and a teacher's evaluation.  Therefore, to try to meet the federal  requirement and to make the teacher evaluation quantifiable, the State came up with a complicated mathematical equation called "Value Added Method" or VAM for short.  As in most states it was "garbage in, garbage out" and most educators referred to the VAM as "junk Science".  This was clearly exposed in the Lederman lawsuit. Despite the fact that the maximum a teacher's influence on a child's growth was 14%, New York State arbitrarily made it 40% and then raised it to 50% this year when Governor Andrew Cuomo was upset over the lack of "ineffective" teachers under the old rubric.

A severe backlash resulted by educators and with dropping ratings and under pressure from disgruntled parents, Governor Cuomo changed course 180 degrees and there is now a four year moratorium for grades 3 to 8 but not for high schools where Regents scores can still be used to determine a teacher's evaluation, at least until the first teacher gets an "ineffective".  Since  the inappropriate use of test scores in the Lederman case as precedent, I expect all those test-based "ineffective ratings" would be thrown out.   Because as everybody knows you can't measure quality with a ruler or a test score for that matter.

I'm a science teacher and the 4th grade test counted as my state AND local measures last year. Makes no sense.

Chaz I think I know the answer but wanted to put it out there. If you can answer that would be great. If the city faces a situation where charter schools and now vouchers take away students from our public schools then enrollment will go down at nyc public schools. Currently we have approx. 1.1 million students in nyc public schools. If the enrollment goes down to say 5-600 thousand students and the doE wants to lay off people will lay offs go by seniority thereby most atr people in the system will be protected with tenure and seniority? ANy input from all would be great as well even though I believe the school choice voucher program will never work and the new education secretary ms. devos debutante will not last the term similar to kathy black when she was nyc schools chancellor for just about 4 months.

"but not for high schools where Regents scores can still be used to determine a teacher's evaluation, at least until the first teacher gets an "ineffective"

I can personally attest to this. I told bits and pieces of my story here and elsewhere. In an nutshell, I was discontinued from probation after my fourth year at Richmond Hill High School under the leadership of Neil Ganesh. I had been teaching at that school for a total of four years and (on paper) was discontinued solely for pedagogical reasons. The last four observations within the last six months were all ineffective. This was a solid 180 degrees away from all of my other observations in the three years of service prior to my fourth year. I don't sit and know what happened, I know what happened.

Ganesh had indicated to me at an earlier occasion that the number of my students passing the Regents were on the low side. This is despite the fact that I taught predominantly self contained special ed students in a historically failing school. Many of these students were chronically absent. All of a sudden (and after that conversation) my ratings suddenly change overnight from completely effective to completely ineffective.

Interestingly there was another teacher in that building (who also eventually got discontinued the same time as me.) who also had nothing but solid effective ratings (just like me) until the day she decided to file a UFT complaint against the school for special ed contractual/policy violations.

I want to confess that I am the troll whose life revolves around fantasizing and repeatedly posting that we are wildly overpaid teachers and that ATRs deserve their plight and don't want to return to the classroom on a regular basis. My New Year's resolution is to try to control myself and stop posting what I know are lies. We'll see if I can do it.

Look at this website, if you are searching for some essay help Essaywriter.co.uk Review Cool essay writers!! Their work fast and correct. Please read reviews