Beware Of The OSI And SCI Investigators. They Are Out To Terminate You. 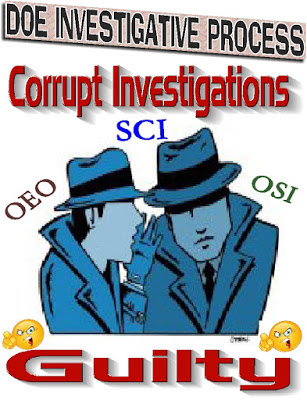 Since Michael Bloomberg became Mayor of New York City and selected non-educator Joel Klein as Chancellor, teachers have been targeted by corrupt investigations by The Office of Special Investigations (OSI) and the Special Commissioner of Investigations (SCI).   These investigative agencies have changed little under Mayor Bill de Blasio and his Chancellor Carmen Farina.  You can read their stories Here.

The two investigative agencies are called when potentially serious allegations are brought against an educator.  If the allegations involve criminal, sexual, or financial issues then SCI are called in.  However, if the accusations are for corporal punishment or verbal abuse based upon discrimination, then OSI will investigate.

Unfortunately, both OSI and SCI are biased against school staff and by the time either investigative agency interviews the staff member, the investigators have already determined the member's guilt or innocence.  Therefore, if you already know that the Principal wants you removed from the school, because you are a senior teacher, a whistleblower, or a person that knows the contract, the investigators will always substantiate the most trivial of actions and recommend disciplinary action, up to and leading to termination, despite the fact that the investigators have not even bothered to talk to you.  Therefore, its best to keep quiet and wait for a more fair venue, like the 3020-a hearing to defend yourself.  Too many educators believe that if they just explain what really happened to the investigators they would see that the allegations are false or frivolous. What really happens is that by talking to these corrupt investigators you are giving them just enough rope to hang yourself.  This is especially true of SCI, who can arrest you on the spot if they believe that you told them enough to warrant your arrest.  Just ask the educators who find themselves in a police holding cell for up to 72 hours before being released by a judge.

My recommendation is to NEVER TALK TO SCI WITHOUT THE PRESENCE OF A LAWYER GIVEN TO YOU BY THE UFT.  Just take the SCI investigator's card and tell them that your lawyer will contact them   Talking to SCI is never a good idea and the SCI will use the information you supply against you, not for you.  As for OSI?  wait for the union to arrange a union advocate to represent you at the hearing and answer simply yes or no.  Unless the union advocate tells you to explain, don't.   Again any information you supply to OSI will be used against you in any disciplinary hearing. Best to answer simply and with as few words as possible. Remember both agencies assume the educator is guilty before ever meeting with the accused.

South Bronx Schools has a post about a former OSI investigator who advertises her services for educators who face OSI investigators and claims she can help the educator gain an advantage.  I am highly skeptical of this claim since OSI has already decided the narrative of the educator's guilt or innocence before the meeting with the educator ever takes place.  However, if you have loads of money to waste, believe in the tooth fairy, and think the OSI investigator is fair and balanced, good luck to you and by the way, I have a bridge in Brooklyn I would like to sell you.

Question: I know a teacher who had an assistant principal call OSI for an allegation of verbal abuse. However, OSI did not take the case and made the AP do the investigation. What does that mean? Why would an AP call OSI if the AP did not think it would go anywhere?

That means the verbal abuse allegation was not based upon discrimination or threats. Therefore, its bumped back to the school. However, if this verbal abuse is a pattern, it could still lead to 3020-a charges.

Then why did the AP not just put a letter in that teachers file? The AP could have done that from the start? Seems to me that when anybody calls OSI that it is a big deal. Is it?

The problem with bad school cops is not so much the institutional corruption of the DOE and DOI, but the institutional corruption of our UFT leaders and
NYSUT attorneys who shrink from blowing the legal whistle on biased investigations and perjurious testimony at 3020-a hearings. Oh the stories I could tell. Well, have told, many times. Why ICE, MORE, Ednotes, and NYC Educator don't push police reform I'll never know.

The problem with bad school cops is not so much the institutional corruption of the DOE and DOI, but the institutional corruption of our UFT leaders and
NYSUT attorneys who shrink from blowing the legal whistle on biased investigations and perjurious testimony at 3020-a hearings. Oh the stories I could tell. Well, have told, many times. Why ICE, MORE, Ednotes, and NYC Educator don't push police reform I'll never know.

Don't assume the AP knew what he/she was doing. Of course when the gotcha fails to gain traction at OSI, letter in file can result. Or, as Chaz notes, 3020-a can be initiated (whether or not DOE will prevail is another story).

Another week down. 3 to go before X-mas break. Keep it simple, out of sight, out of mind. No problem.

ROLL CALL: How many teachers reading this blog have a letter to file here? (Listing what the letter to file was for would also be interesting to read)

If a teacher was subject to a corporal punishment investigation, but it was handled by the administration - i.e. the AP did the questioning of the teacher and witnesses, would there still be a problem code on the teacher's file if the claim was unsubstantiated? No one from the OSI came to the school to question anyone and the teacher was not found guilty of the accusations.

Is there a website where any SCI investigations can be viewed?

If I have a chapter leader who did not represent me adequately enough due to his sexually inappropriate behavior towards the women at the school who can i report it to?