How Vindictive Is The DOE When It Comes To Whistleblowers? This Vindictive. 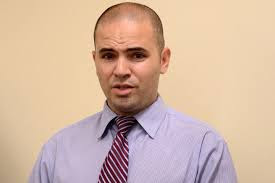 Teachers who have been working in the New York City school system for decades know, either first hand, or from colleagues how the DOE's Office of Legal Services will pull out all stops to terminate teachers for the most minor of incidents when the Principal demands it.  It's not unusual for the DOE to sic their investigators on the hapless teacher and make frivolous incidents into major misconduct.  You can read my corrupt investigations articles Here.  Moreover, the DOE practices a "double standard" when it comes to disciplining administrators and staff. However, the DOE seems to have a special dislike for staff whistleblowers, be it Regents cheating, "double dipping" by administrators, like Principal Linda HIll, and administrative misconduct by abusing their authority over their staff.

One of the DOE's most egregious cases was the arrest of former Staten Island Chapter Leader and UFT Presidential candidate, Francesco Portelos by the DOE for publishing a sham piece called "How to hack the DOE payroll portal and give yourself a raise". Everybody who read the post knew it was a fantasy piece and gave many of us a good chuckle anyway.  What did the DOE do?  They called their favorite NYPD Detective, a Mr. Conner of the 84th Precinct that covers the DOE's 65 Court Street building in Brooklyn to arrest Mr. Portelos.  That's after assurances that Mr. Portelos would only get a desk appearance summons. Instead, he was arrested and kept in a holding cell for 33 hours before the District Attorney threw out the DOE's criminal complaint.

However, you feel about Mr. Portelos, what the DOE did was over the top and I hope he wins his lawsuit for abusing the justice system that had him unfairly arrested. You can read the story Here.
Posted by Chaz at 4:32 PM

Principal Henry from Gateway is trying to take my license since 2013 for exposing her cheating with grades, cronyism, abuse of power, abuse of student's and staff, incompetence. She uses evaluation process to retaliate but I was able to beat DOE 3 times in the row. I am demeaned, publicly humiliated, harassed, isolated, falsely accused and investigated, and I got really sick from all of it. I had to file 2 lawsuits to try to stay employed. Now since Henry can not finish me off DOE assign Superintendent Mendez( another walking intelligence) to handle me exclusively and to try to finally finish me off.
Henry said to me that my problem is being white male with to much skill and knowledge. I will not back down from doing a right thing. It is what I do

I wrote about Judy Henry previously and you can read about her under bad principals.

We believe you because it is happening to many teachers.

Stay strong 6:25. Bullies never win. I am confused why your "whiteness" or any other color is considered a "problem". Henry sounds like a piece of something

The DOE and UFT work together. We know this. The solution has to be to push both for accountability. The DOE has been stonewalling my attempts to get Step 2 Grievance denials and Article 23 cases through FOIL. Now it appears I have to file an Article 78 against them.

FOIL is a key tool more teachers should use. Hoping this arrest sheds light on this abuse we have to endure.

Chaz, correct the link to the silive.com story.