The Renewal High Schools Academically Are Like A One Legged Man In An Ass Kicking Contest. 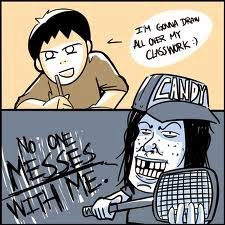 One of the greatest failures of the Bill de Blasio Administration is his Renewal School program.  These are struggling schools with a low achieving student population, a competitive disadvantage in recruiting academically proficient students due to the DOE's misguided school choice program, and the Renewal Schools failure to recruit veteran teachers to work in the highly stressful and intensely accountable environment.  The result is an influx of "newbie" teachers, year after year, who flee the schools through the Open Market Transfer System every summer and this high staff turnover destabilizes the already struggling schools.

The New York Post has started a one week series on the Renewal Schools and their failure to significantly improve student academic achievement, especially the high schools.  The Post article pointed out the following issues of-the Renewal Schools.

Moreover, the dropout rate at the Renewal High Schools rose to 18.5%, compared to a 8.5% dropout rate for the City as a whole.  Finally, the "college and career readiness" rate of all Renewal School has fallen since 2014 and only 12.3% of the graduates achieve that proficiency, compared to a 37.0% for the rest of the high schools. In tomorrow's paper the article is about a Renewal High School with uncertified teachers, lack of resources, and an uncaring Superintendency.

I have written various articles on the failure of the Renewal Schools and the various issues that have resulted in their continued struggles and you can read them Here, , Here, Here and Here. For more about the failed Renewal School program please read this.

The bottom line, until the City changes the school choice and fair student funding programs, the Renewal Schools are like a one legged man in an ass kicking contest, they cannot win, or in this case improve academically.
Posted by Chaz at 11:42 AM

Anyway you slice the cake Diblasio is sooo much better than the spirit killer midget mike bloomberg. So, ok mikey boy would have closed the schools and gave the space to moskowitch so she could occupy the space and have some more children crying all day. No, diblasio is our friend people in this environment of politicians not liking our public schools, not liking our unions, not liking our schools in favor of some bogus billionaire funded school designed to make the system even more insane than it already is. Diblasio 2018.

Fariña should retire, and Mulgrew should resign.

Wow. I'd like to know how much DiASSio is paying 8:45 a.m. to spew this pile of bovine excrement. Phew--you'll be lucky not to get a ticket for polluting the environment from the stench! I've already Lysol-ed my computer screen.

What positive changes for teachers has DiASSio implemented? Same drive by observations, same targets painted on senior teachers, same fake 3020a charges, worse deal for new teachers, harassment of veteran teachers, fake graduation stats and fake grades, etc. He kept the worst of the worst policies in place and offered nothing in the way of improvement, appointing as chancellor an antique out-of-touch rubber stamp sadist who hasn't had a new idea since 1985.

If he's so great, why do I read a new investigation on him by Preet Bharara every day? He is an out and out commie who doesn't look up from his agenda to check reality. There can be no nice neighborhoods or great functional schools---everything must be EQUAL, everything must therefore be mediocre. If they're not, he will place homeless shelters in affluent neighborhoods to bring down the tone of the neighborhood so it is less desirable. He will lower the standards of entrance exams to those great schools so that they become mediocre--at best.

He is up to his neck in dirty deals with real estate developers, who would build up every square inch of the city and leave no open space at all.

What possible reason would a rational being have to reward such a corrupt, incompetent moron lacking a shred of integrity with another 4 years to further ruin the city?

At my renewal school we look awesome. The admins are experts at the dog and pony show. However, they do work us to death and smash us with Danielsons and reformy claptrap.

hey 7 50 I do hear you but like I said he is better than people like bloomberg, klein, moskowitch, devos.....at least he is our "friend" and not looking to destroy our public schools like the rest of em

A bloated bureacracy surrouded by corruption.

Most students in renewal schools (including mine) are woefully unprepared academically and oftentimes have little interest in school other than the free food and socialization. The reformers actually believe that "Freedom Writers" was an accurate movie and think that all white school personnel (save for young social justice warriors) are racists who don't know anything and try to harm students. The movie was a farce and did so much damage to our profession.

At renewal schools if you're not a jack-booted 'passionate' (and young) powerhouse, you're looked upon as a problem that must be eliminated. Only a few more years to go and I can retire. Even at a reduced pension, I plan on getting out of this soul-crushing system based on poor quality students and anti-white racism.

"The reformers actually believe that "Freedom Writers" was an accurate movie..." The students portrayed in Freedom Writers could actually read, write and speak at grade level - end of story!

Maybe they can hire newbies to fix these schools like they always do.

Why aren't all these consultants and the UFT leadership teaching in those schools?

Too many experts, and not many experienced teachers working there.

The Queens UFT office should eliminate half the staff, since they do not defend teachers anymore.