What Do The DOE And Silicon Valley Have In Common? Hiring Cheap. 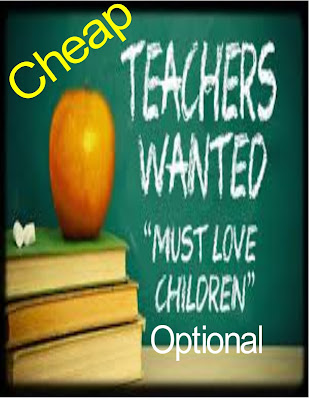 Tonight, CBS's 60 minuets will have a story how the many Silicon Valley technology companies abuse the H-IB visa that allows companies the ability to hire foreign Engineers and Scientists who have a specific skill set that Americans don't have.  However, the truth is that the Silicon Valley Tech businesses has hardly bothered to seek out Americans when there are thousands of foreign workers who are willing to fill the positions at a much lower salary and less benefits.

The DOE does not significantly participate in the H-IB visa program.  However, the DOE has their own version by forming policies that encourage the hiring of cheaper teachers.  These policies are the school-based "fair student funding" and the "Open Market Transfer System".  Moreover, the results of these two failed programs has caused a pool of excessed educators of approximately 1,500 annually, with the average age in the 50s and salary close to $90,000. They are known as ATRs.  Finally, the DOE encourages school administrators to harass and push out veteran teachers, through resignation, retirement, or termination through 3020-a charges. Every veteran teacher that leaves is replaced by a much cheaper "newbie" with a lower salary, and an inferior Tier VI pension, assuming they make it through their vesting period.

Obviously, the Silicon Valley tech companies and the DOE have similar hiring policies and that is the cheaper the better.

I have 6 absences and got a letter that a field supervisor is coming to meet with me.

Is this harassment? I feel it is but uft gives crap answers.

Any recommendations who I should contact as an atr?

2:03,
You must have a pattern, Monday's and Friday's. Otherwise you're within your allotted 1 per month. Also they want doctors notes, after your allowed three days self treated. Don't look for the UFT to help you any way.

If you have a 'pattern' what can they do?

I used 2 tuesdays 2 thursdays and 2 fridays. No way is that a pattern but contract states you can have self treated until you hit 10

Pretty sure it's after 7 self treated days that u need a note. You get 3 personal days.

The field supervisors are here to harass and lie in the observations.

Even with a pattern , Excessively Absent teachers can only be fined or suspended not fired

Yeah, they bring in a lot of newbies at my school, but then they literally psychologically torture them. It is like Guantanamo Bay or Bagram Prison in many schools. The admins, so many of them, are sadistic and gratuitously harass and nitpick until many staff members have PTSD.

The 'observations' are literally ambush whack-jobs too, and this makes us all nervous and on edge. The admins will sing the song of 'support' but what they really do is look to criticize and ultimately fire or drive away as many as they can. It is often said you cannot fire your way to success. The DOE has the opposite philosophy.

Even skilled, hard-working tenured teachers like me know that tenure means little anymore. Two years of Ineffective or even one Developing now can get you on the road to being canned. Who in their right mind would go into this oppressive profession anymore?

This unfortunately is the way of our country now due to globalization. Many industries are practicing this bull crap dirty money business and have become more greedy while services have diminished however CEOs bonuses are through the roof even more! The future is bleek as well as technology takes over and eliminates most lower level jobs too causing Americans to suck it up as the USA turns third world - this is the unfortunate truth people and we can all blame it on globalization as the rest of the world has taken us down with them

One day, I was on an elevator at 65 Court Street. Someone was holding a computer printout. I glanced at the first page. It was headed, "File Numbers of Pedagogues With Suspicious Absence Patterns." Be careful! DOE Central tracks that!

Anon 1002 that is crazy u caught that, but right on point.

I'm an ATR and was rotated a few years back into a highly performing school.

As we all know, teachers accrue a sick/personal day each month, and I take a day off for personal/self treated; never a Friday or Monday. When the Principal called me in and said "there was a pattern of absences....one day a month", I explained the contract and told him "One day a month is not a pattern; every fourth Friday is a pattern.

He just turned red. This shit is almost fun.

People, several years ago, the UFT won an arbitration stating you DO NOT need a doctor's note for absences. The "you need a MD note for three consecutive absences" is a MYTH. Do your research people!

6:16 tell that to the ATR supervisors and they'll laugh their asses off, while they U rate you. UFT rules are not enforced by the UFT. You can be targeted for any arbitrary thing they want,

ATR field supervisors are harrasung teachers who took 6 days. Quail, Stark, Mendez and others are enjoying themselves.

When I started teaching I would take a mental health day here and there. There was never a problem. Now, I bring a doctor's note in, just because I basically will set up appointments on days when I want to take off.

A high number of unsatisfactory ratings are being delivered again this year. Observations out of license, observations on students an ATR just met seem acceptable. Lame reasons, and opinions of supervisors in which a supervisor may not be an expert of the subject area are allowed. Disciplinary meetings on attendance or any type of bizarre reason are acceptable. Still some lucky ATRs have not had a supervisor, or has not been observed. The observation process is being used in an arbitrary, and capricious way in most cases to demoralize ATRs. Instead of reducing class sizes by putting ATRs back to the classrooms, the limited resources are going to waste. Some of us believed in a change of tone, but the reality is that it is getting worse. We have a department of education badly run by consultants, lawyers and bureaucrats instead of a department run by input of teachers that rewards and appreciates effort and good teaching. Also experience it is considered a liability, and a reason to be a target.

Write to Daniel Dromm, the Chair of the Education Committee of New York City Council about how ATRs are mistreated. Talk about the money wasted on field supervisors coming with an agenda, and conducting ridiculous observations that may lead to lawsuits. Our schools need to put our experienced teachers back to the classroom.

They need to open an investigation on how resources are being wasted. We need all of you to actively get involved.

Why is the UFT working against us? VASQUEZ ALWAYS SIDED WITH DWARKA.