Student Discipline Is Getting Worse Under The Mayor's Misguided Policies. 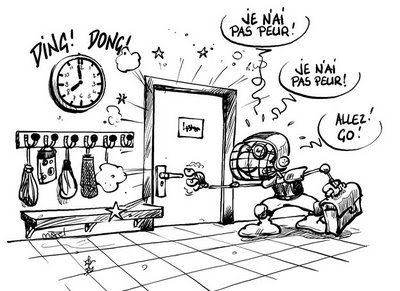 Over the last two years I wrote some posts about how school discipline has been getting worse since Mayor, Bill de Blasio took office who sees the New York City Public Schools from the perspective of his high achieving children who went to specialized high schools. You can find my posts Here, Here, and Here.

First, it was the ill-advised cellphone policy that allowed students to carry them in school.  Sure, he insisted that the students could not use in in the classroom but he put the responsibility squarely on the teacher, School administrators held the teachers accountable and not their own lack of enforcement for the cellphone use in the school.  The result was that students were distracted and a study showed that it caused a reduction in student academic achievement, especially in poor, minority schools.

Second, the Mayor allowed a lax student discipline policy with fewer suspensions and schools could no longer suspend a student unless DOE Central approved it.  Instead he pushed a restorative justice program and for more serious offenses a "warning card" program.  The result was a more unsafe school environment as misbehaving and even dangerous students were sent back to the classroom to continue to terrorize the teacher and students.

Finally, under Mayor Bill de Blasio's progressive policy, his emphasis to reduce arrests and suspensions in the schools allowed  students to run roughshod in the schools with little fear of punishment.

The Bill de Blasio approach to school discipline is just like the  "broken window theory" just like real broken windows if the windows remain unfixed in houses on the block, eventually the rest of the houses on the block will experience lower property values, and have broken windows themselves. The same goes for the schools if the misbehaving and violent students are not punished and they continue to disrupt and disrespect the classroom, eventually other students will follow suit.  The result is an academically deteriorating school.

Max Eden of the Manhattan Institute did a detailed analysis of the Bill de Blasio student discipline policies and came up with the same conclusions as I have written about since the Mayor took office.  You can find the full report Here.  A summary of the report by Chalkbeat can be found Here.
Posted by Chaz at 7:02 PM

London School of Economics research has shown that schools that enforce a "no-cell-phone policy" among students have shown a 6% increase in standardized test scores across the general student population and an 18% increase in standardized test scores among the "hard to teach" (learning disabled, IEP, ELL students). This was a 10 year study and the results were consistent. (As if educators need a study to know this).

So naturally we here in NYC make sure cell phones are carried by students throughtout the school building...go figure.

For lack of a better word there has to be an element of fear in school. Kids need to be afraid of the consequences of their action. Telling a child to stop over and over again without there being a punishment is fruitless and eventually makes the behavior worse. The child soon realizes that all that happens is a teacher or dean saying stop so they keep pushing the boundaries. This of course comes all at the expense of the kids that want to learn as it steals time from them. I am so sick of the social justice liberals who think consequences turn students into monsters. Education needs to be earned and failure and punishment should be allowed in order to enable those who want to learn to learn.

outside school a lot of the kids action would get a person arrested. Inside the schools since detention and suspensions have been virtually eliminated at best the student gets isanother phone call home and if lucky there is an answering machine to leave a message

Students out of control? That's an understatement. Here's the low down in my renewal school: students use cellphones all the time. Admins hold us accountable for it, even though many students do not listen to us when we tell them to put them away. We cannot physically take the phones from them because it is 'corporal punishment.' We can just ask and hope they give them.

We tried detention this year (again) and it flopped after one week because no one showed up. Then we gave all students laptops! Youtube is one 24/7 now, and admins blame us. Students come and go as they please. Admin makes a big verbal show via the loudspeakers about 'clearing' the halls and all that, but they gave up physically doing it a month ago. We do the commie-style restorative justice thing, but we have never had to use it to solve student problems because when we report problems to the office they are ignored, so most teachers have just stopped reporting and deal with the chaos like ringleaders in a circus.

The students who want to learn, I feel so sorry for them and see the sadness and confusion in their faces. Our admins are so our of touch and give us contradictory directions and feedback. Western civilization is toast in 20 years.

This always irked me to no end. School I worked at last year, had a uniform policy. BTW, in my experience every school that has a uniform policy (which is usually just a polo shirt), just plain sucks. So, admin would barge into classes, interrupt instruction, to point out students who were not in uniform. This went on a few weeks. Then it stopped.

Yeah, I would tell them to put their uniform on, which again, was just a shirt. They would refuse, sometimes would call the dean, again, instruction would be stopped, time would be wasted. For a shirt. A friggin shirt.

And after a few weeks they gave up. Stopped enforcing it. Though they would from time to time point it out in class. They also tried detention. Kids stayed the first week or two. Then started skipping. So they started suspending kids. Hey, great for them, they got free weeks off.

The students who want to learn, I feel so sorry for them and see the sadness and confusion in their faces. Our admins are so our of touch and give us contradictory directions and feedback. Western civilization is toast in 20 years

That is I think how the vast majority of us who have worked in poorly run schools feel.