The Teacher Retirement System Needs To Update And Upgrade The TDA With A ROTH Option. 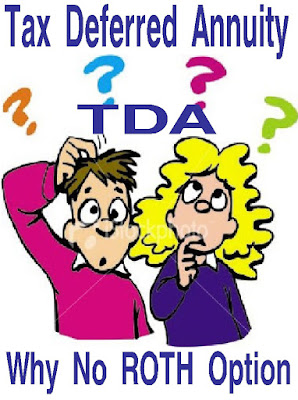 In my continuing series to make my readers more financially savvy, I have explored possible improvements to our Tax Deferred Annuity (TDA).  Its no secret that our TDA is one of the best benefits educators who work for the DOE has.  UFT members can get 7% in the Fixed Income Fund, with no administrative or management fees while non-UFT members get 8.25%.  According to TRS 60% of all educators funds are in the Fixed Income Fund. Who can blame educators when inflation is running at 2%?

However, our TDA has some shortcomings, a limited selection of funds and up to a three month delay to change your portfolio contribution allocation as well as re-balancing.  One of the more serious flaws our TDA has is the lack of a ROTH option. There is no reason why TRS does not offer a ROTH option.  The NYCDCP for Municipal employees offer both a ROTH 401{k} and 457 plan.  Yet for some unknown reason, the TRS does not offer a ROTH option in their 403{b} plan.

For new and younger employees, the ROTH option is vastly superior to the non-ROTH option.  Primarily because the newer employees make less money and therefore, the taxes taken out for each paycheck is less.  Moreover, younger employees have a long time to retirement and the appreciation from contributions and compounding will result in a large amount of money subject to taxation when its time to withdraw under the TDA plan.  Presently, according to the TRS the average TDA fund has $325,000 in it, a large sum of money that the government would like to get their hands on and will without a ROTH plan.  Furthermore, under the non-ROTH TDA plan, retirees over 70 years of age will have to withdraw a certain percentage of money that is subject to Federal tax.  This is called the Required Minimum Distribution (RMD).  By contrast if the TRS had a ROTH TDA, the withdrawals would be tax free and not subject to the RMD.  Finally, by having a lower salary, and the ROTH TDA plan, if there ever is one, would allow money to be taken out paycheck to paycheck, 24 annually, and the bi-weekly tax bite will be minimal, when compared to the tax-free withdrawals at retirement.

For educators near or at retirement, baby boomers for example, its probably too late to convert the TDA to a ROTH plan, if offered, since the money that is transferred into a ROTH plan would be subject to Federal taxes.  For example is it really worthwhile to convert your entire $325,000 TDA and pay a 33% to 39.6% tax on it?  Probably not. It seems to me you are better off being subject to the RMD which is 3.65% and pay taxes on $11,863 that must be withdrawn from the $325,000 nest egg and at a hopefully much lower Federal tax bracket of between 15% and 28%.  For us older folks you can see the tax advantage by contributing to a TDA  Here.

Until TRS offers a ROTH TDA plan, the educator really only has two choices.  Contribute to the TDA plan or rollover the money and new contributions to the NYCDCP 401{k} or 457 ROTH plans.  Personally, I rather have the 7% interest rate guarantee and the tax deduction and pay the RMD when I am 70 years old,

I smelled ATR supervisor Justin Stark a minute before I saw him; he slobbered down the hallway before he entered my art room and walked in unannounced while I was "teaching" a group of stugents (not misspelled) I had never met before.....

What a soulless pig.

He probably rated you U. Our Union is to be blamed.

An interesting side note to this retirement article is the fact that beginning with the 2016 tax year the baby boom generation begins to reach age 70.5 requiring all reaching that age to take a minimum required distribution (MRD). As a result, the federal government is finally going to reap the big reward of billions in new annual revenue pouring into the U.S. Treasury. As each year passes the number of baby boomers required to withdraw the MRD and pay taxes will increase. New York State presently permits each IRA - 403B holder to withdraw up to $20,000 without paying taxes. Good news for those who will keep NYS as their main yearly residence.
This mandatory MRD is catching many of us retirees by surprise. At one recent UFT retiree meeting a teacher questioned UFT reps in regard to the forced MRD requirement. The retired teacher was angry that she was being forced to withdraw part of her safely invested funds earning 7% annually and pay the additional federal income taxes. She implied that she had no need for the excess cash that now would be in the bank earning very little.
The article below points out that we baby boomers must now pay the federal taxes on the withdrawals which will result in a steady stream of new federal government revenue. A big $2 trillion dollar bill that is now beginning be repaid is trickling into the U.S. Treasury. We got the tax break-deduction over the years we contributed to our TDAs and now its payback time.

Thank you Chaz for an interesting article.
I stopped contributing to the TDA because of RMDs. Now I contribute to NYC Deferred Compensation 457 Roth and 401K Roth. They are after-tax investments but I will never be taxed on them again and I won't be subjected to RMDs. When we are in our golden years we are collecting our pension, Social Security, as well as our spouse's. If we are forced to take out tens of thousands of dollars each year, we could be put into a high tax bracket and forced to write large checks to the IRS every year. Furthermore, the money you are forced to take out each year (RMDs) will forever be taxed each year forever.

Great information about this topic can be read in the newspaper The Chief, in their Pension News column written by Joel Frank.

At that point what's better? Getting the 7% compounded annually on higher amounts since it's pre-tax, or paying the taxes up front and having less in there collecting interest?

Alaska, Florida, Nevada, South Dakota, Texas, and Wyoming have no state income tax. They will not tax your NYC pension or TDA. I have chosen Florida. Reside there for four months, and you can be a full time resident. In reality, I will just snowbird there...

ATR Supervisor Justin Stark rated me "U" with a classroom I never met, out of license. He is an evil tooool!

And the UFT is part of it. A F'n pogrom.

They are probably going to target you when you reach 17 years of experience, and our Union will betray you.

The issue with the Roth type accounts is that unless your funds have been invested in stocks recently the investor
has earned virtually nothing. Ten, 20, or thirty years of little annual earnings could result in a very
small amount after 20-30 years. Historically, the recent stock market run cannot be counted on year after year.
So, investing in the TDA saves the fed, state, and city income taxes up front. Gives the investor an almost
sure 7% each year which helps the investor build a nice sum after 20-30 years. Then, after retirement, still earns
the 7%. The 7% is not guaranteed, of course, but comes close enough to matching long term stock market gains.
One must choose wisely and with study before committing to a 20-30 year retirement program.
I screwed up some of my early IRA investments along the way. However, the TRS TDA really saved my financial butt!
It was a major element that permitted me to retire from the NYC DOE.
Without that program I would still be working in the classroom.

American Radio, the NYC deferred comp. offers a wide variety of investment options, including Target Funds. I don't understand your comment that"Roth type accounts have earned virtually nothing" It all depends on how you invest the Roth, in bonds, in stocks, etc. there are many choices.
I choose Roth 401K and Roth 457 because I will never have to pay taxes on the in the future, it is all My money.
I will not be subjected to RMDs.

Anonymous, You are correct. I have used one of the targeted funds within the 457 family. Yes, they offer a good assortment. My fear is always that the stock market does not always live up to expectations. As a result, we recently sold our well performing 457 fund and transferred into their stable income fund. I always fear the stock market. That is a personal fear I have after living through a number of bear markets beginning with the 1974-1975 bear market when the DOW Jones sunk below the 600 level. Stay well diversified

The Union will not do anything.

Well said. As long as you invest Roth (after tax). I pay tax now know that this money will never be taxed again. It is a great gift for your children or benefiaries, a tax free inheritance!
I say no to the TDA until they start offering a Roth.

Considering deducting $20,000 this year for home remodeling. I know a colleague who deducts 20 every year. He told me it would be taxed higher after 70. What are your thoughts. In addition, I could write a book about the incompetency and abuse of principals...the scandals and in appropriate behavior of staff.