COPE And The Constitutional Convention. 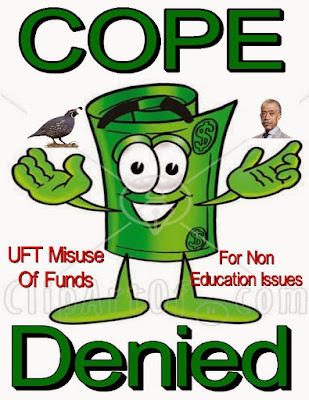 Our union leadership is pressuring the Chapter Leaders of the schools to push their members for increased COPE contributions.  They are telling the members, somewhat falsely, that the COPE funding will be used to  fight the upcoming vote on the New York State's Constitutional Convention, which, in theory, can see some of our benefits, like our TDA fixed option (7%) and even possibly, but not likely, our pensions being reduced.  While I am all for stopping the Constitutional Convention and would donate my time and effort to this cause, I must take into account the history of how our union used COPE funds.

Over the years our union leadership has claimed that all COPE funds go to advance member goals.  However, the union has used COPE funds for some very questionable causes that don't serve member interests.  Remember, our union was going to supply buses to transport picketers to Staten Island to support an Al Sharpton organized march against fellow union members of the NYPD, only to withdraw the offer when a backlash by members developed?   Read the article Here.  Then our union sees no problem allowing our COPE money to be liberally spent on Quail and Booze for selected friends in Albany and Boca Raton while the rank and file are served crappy cookies and soda.  Over the years our union leadership has treated the COPE funds as their own personal piggy bank to support favored causes and organizations that has little or nothing to do with member issues without member input or approval.  When was the last time the union leadership reached out to ask your opinion about how COPE money is spent?  The answer is never!  The union leadership does not care what you think, only what they and their friends decide is a worthy cause to donate to.

When it comes to having my already inadequate paycheck, thanks to the inferior contracts our union leadership has negotiated since the turn of the Century,  to be further reduced by giving the union leadership the right to deduct COPE from it.  Well I stopped contributing a long time ago when our disconnected union leadership treated the ATRs as second class citizens with no real representation and refuses to reach out to the 1,400 ATRs who simply wanted their voice heard when negotiating with the DOE.  Add to that how our union leaders will use COPE money for questionable causes and if reading this post you still continue to let the union take out for COPE, I have this old saying that you need to read since it applies to you..

If you want to remove COPE from your paycheck then read my COPE article Here.
Posted by Chaz at 6:36 PM

Mulgrew's tales of woe in Boca were to make sure the retirees continued to fund COPE. Go to a pension consultation, if you can get one, and you will get constant requests to fund COPE as 'it is the only way to protect our pensions and TDA'. What are they doing with all this money due and COPE? How much are they getting a year? People still think our dues are paying for dental and eye care!

I am certain the UFT doesn't want some lowly ATRs donations so I will keep my extra $$$$ thank you very much.

I stopped contributing to COPE years ago after hearing too much lip-service without any action behind it. In retirement I also didn't join the union. Free classes and a subscription to the NY Teacher just doesn't justify contributing. The city pays our health, dental, optical, etc. The UFT only administers it. Not surprisingly, the UFT Welfare Fund has high administrative costs compared to other unions. This was reported in study done by the NY City Comptroller's office.

In this day and age I just can't COPE anymore!

I thought you had to be in UFT to get dental during retirement? Please let me know details on this!