The Secret DOE/UFT ATR Agreement Is Little Changed From The 2014 Contract. 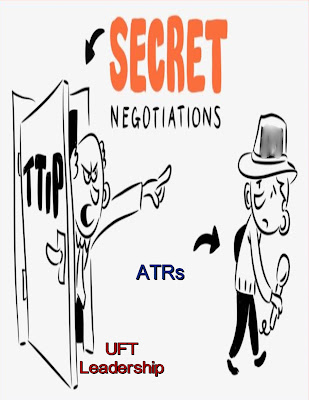 The secretly negotiated ATR Agreement, without ATR input or approval, appears to be similar to the disastrous 2014 ATR Agreement.  The only improvement with this agreement is the elimination of a few of the second class citizenship issues like the one day expedited 3020-a , the two day voluntary resignation requirement when not showing up to an assignment, and the vaguely worded "unprofessional conduct" clause.  Then there is also the inadequate and insulting ATR buyout incentive. Otherwise, the 2017 ATR Agreement is similar to the 2014 ATR contract.

First, and foremost the DOE will still be allowed to have two lists of ATRs.  The first list for ATRs who came from closing schools or programs and the other for ATRs who survived their 3020-a discipline hearings.  Based on past placements, the DOE only recommends hiring from the first list and only when there are no ATRs left on the first list will ATRs who won their 3020-a termination hearings be offered a vacancy. To ensure that ATRs who won their 3020-a hearings are not offered a position, the Scarlet Letter (red flag) remains on their file for principals to see, even when the ATR was found not to have committed the charge..

Second, for teachers in Districts, they can now be "forced placed" anywhere in the Borough once again,  This is a major loss for elementary and middle school teachers who have always preferred staying in their District schools and not travel across the Borough to strange schools and neighborhoods.

Third, "forced placements" of ATRs are still in effect, there is no mutual consent for ATRs, despite how our union presents it in the ATR Agreement.

Finally, the union leadership will still allow the DOE to continue to discriminate against ATRs for per session activities like Regents grading and school based activities.

The 2017 ATR Agreement that will stay in effect until the end of the 2018-19 school year can be found on the ICEUFT blog Here.

There are another group of ATRS that are excessed for closed programs, low enrollment, loss of funding or whatever.

So we go back to mandatory interviews? Are we also going to rotate if there is no placement? What will rotation look like? 2014 agreement was a weekly rotation right?

Seems like the DOE and the UFT are dumbfounded when it comes to the ATRS! Excessing has always been hard but went by seniority. The UFT never should have agreed to this ATR stuff. All member rights have now been severely weakened.

No teachers can really transfer unless they are newbies (untenured) or have no more than 10 yrs in. All these issues MUST be part of the talks when we consider a new contract!

ATRs need to have a President, Vice-President, Treasurer etc... Monthly meetings rotate every month to a different Borough including Staten Island. We also should wear shirts once a month saying "ATR & PROUD" and another shirt "ATR since XXXX". Who is with me?

The whole system is sickening.

There are no more rotations. You will start the year somewhere, and then they will move you only based on need of a school. That sucks...

What about ratings? Are we still under the S/U system?

ATR's should not be given bathroom keys.

Are 3020a winners force placed too?

Just think active employees have yet to see a hard copy of the 2014 contract. Can't wait for the Janus/AFSCME case to be decided by the supreme court. No more union dues Yeah!!!

I hear ATRs that survived their 3020As will still be rotated.....any comments?

I had to interview with a principal a couple of months ago and this maniac was trying to hire me. I had no intention of being hired. I knew this principal was a nut job. I called him and told him I desperately want the job and played along. I then screamed on the phone "shut the fuck up grandma - I will bury you. I am on an important call with my future principal." He then told me that "I think I found someone and good luck" I called him 3 to 5 times a day after that pretending I really want the job. Never heard from him again.

New ATR agreement now voids the 2014 and 2011 ATR agreements. It also follows the 2007-2009 contract with reference to ATRs. I am assuming that we will still have S/U ratings.

Of course, this is a separate group. Field supervisors have orders to get rid of these teachers first.

Only if they,run of teachers.

Thanks Chaz for the information. Without you and the other bloggers we would be left in the dark.

So why do we have field supervisors, o yah to get rid of us.

No, 8:59, the ever-stupid UFT already promised this utterly incompetent boob of a mayor its support in his reelection, months ago. So they don't have to come up with a truly fair deal for ATRs. They can continue to kill them off at will, with DeDumDum's blessing.

Meanwhile, the Dope from Park Slope and his equally brain dead minions on the city council are busying themselves with giving away $61.5 million taxpayer dollars in political pork being handed out to nonprofits affiliated with firms who’ve worked as consultants for Speaker Melissa Mark-Viverito. Rather than reaping any benefit at all from their tax dollars, NYC residents are simply the unwilling participants (and piggy banks) in DeDumDum and Mark-Viverito's income redistribution schemes to their pet progressive projects.

And then, in his spare time (when he's not at the gym), DeDumDum is busy dumbing down the entrance exams to the few remaining jewels left in the system---Townsend Harris, Stuyvesant, Bronx Science, etc.--so that anyone who can fog up a mirror can get in there and proceed to make it a failing school, just like the one they already messed up and left. There are to be no more special schools where kids can actually excel at their studies in a quiet academic atmosphere! No, all schools, according to Comrade Bill, must be equal in all things. In this case, mediocrity. And THIS is what the UFT has already thrown their hat into the ring for. This incompetent moron masquerading as the mayor.

It is a system that will hire uncertified, inexperienced, and less qualified teachers over experienced teachers.

I heard they already destroyed W.C. Bryant High School that was a good school, by getting rid of the older teachers. The UFT should be ashamed of themselves.

This new ATR agreement will make it easier to terminate you, since the Danielson Rubrics it is easier to manipulate. Remember Danielson herself admitted that she will never use the Rubrics to evaluate teachers. In a difficult class it is very easy to get ineffective. Or any little false complaint from a student can get you out also. And some of you may never get a chance to regain your reputation because nobody will hire you permanently.

ATRs will end up in a bad school, and Principals will be encouraged to target ATRs.