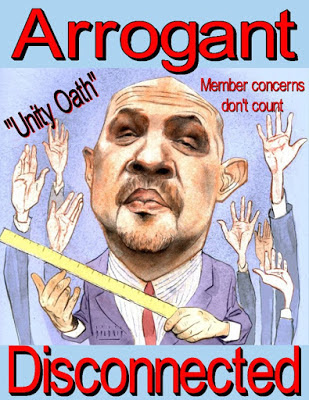 Since our UFT President, Michael Mulgrew, believes the Charlotte Danielson rubric is a good evaluation tool for teachers.  Therefore, its only fair if we rate Michael Mulgrew the same way, using the Charlotte Danielson Rubric on how he treats the members.  I took into account his 2016-17 actions, like the negotiations with the DOE on the ATR Agreement, his usual lateness to the Executive Board meetings, and his undemocratic control of the Delegate Assembly. Below are the 8 standards and how he rated on each, including his final grade.

How much Michael Mulgrew really knows is uncertain or is he simply a mouthpiece? Since he fails time and again to include the rank and file in any decisions and how he arrived at them.  Moreover, he severely limits information to the members.  Is this on purpose or is it because he doesn't know himself?.

Fails to completely identify issues and sows confusion by making deals behind the back of the members. All negotiations are secret and does not include affected members. Example, the ATR Agreement


2a - Creating an Environment of Respect & Rapport. - Ineffective

Mr. Mulgrew does not care to hear or entertain dissenting opinions and never runs a democratic meeting. Pester him with complaining emails and he will ignore you completely.  Further, his agreeing to make ATRs a second class citizen and allowing for forced placement shows his lack of respect for dues paying members.

Michael Mulgrew totally controls the process at meetings and bad behavior is not tolerated, except when its in support of him.  Remember, he will punch you in the face if you touch his beloved Common Core?

Questions and discussions are frowned upon and only those questions are allowed that are closely controlled to come up with one correct answer, Mulgrew's.

Dissidents learn quickly that discussions are one-sided and the outcome is predetermined.

Mulgrew needs no damn assessments on the issues.  He is always right, even when he's wrong.

Due to Michael Mulgrew's rating of "ineffective",  Mr. Mulgrew will need a teacher improvement plan that includes but not limited to::

Maybe Mikey can file an appeal of his rating with the DOE and see how useless the process is for the rest of us.

Well, how can Mike Mulgrew ever win and get this ineffective rating corrected? Oh, forgot. He does not get rated by these lying, vindictive, wanting to get rid of staff supervisors. This is good Chaz.

Unfortunately. Once again the joke is on us.

It is not just the leadership but we need to look at the members too. How many members are involved? How many go to Union rallies, labor day parade or protests? If leadership saw 300 to 400 protesting at every event then would things remain the same? Nothing will ever change unless the members' mentality changes. No leadership will do anything for their members unless they see numbers. But how many people are really involved as opposed to sitting him complaining.

Why don't 400 members show up at the labor day parade? Imagine the message. Wearing a different color shirt, outnumbering the number showing up for leadership. NOW, that . is a strong message.

Yes true. Thank you for sharing that message. Members also need to tell the chapter leaders to inform them of these events. Chapter leaders in many sites are just there in name.

Love this post. Laughed so much, tears were coming out.

Chaz, Mr. Mulgrew, I do believe the UFT does need a change at the top. Hey give Mulgrew credit as he had to deal with Bloomberg when he first got the job and that was a handful. I guess we can all say that Bloomberg hosed Mulgrew in all facets of issues and we all are suffering now from that.
However, Mulgrew has not provided top notch leadership and that is not just an reckless statement but rather the unfortunate truth. I mean I see other leaders of other unions most notably the police and these leaders go to the press and challenge negative information that is out there whereas Mulgrew chooses to remain silent and let the press and the reformers have they way without much push back.
Just like a professional team in any sport when the leadership gets stale and the players are not listening to the coach then a change of leadership is needed. I believe the players here (us UFT hard working educators) have had enough of the slaughter and am now ready for a fresh perspective from a qualified leader of the UFT.
I believe the final straw for Mulgrew will be if we indeed go to a right to work for less state and that is where Mulgrew will have to prove his worth to us otherwise we need a coaching change. Have a great summer my colleagues wishing/praying for the best.

I don't find it humorous at all, because all of it is true. We have a dictator running a union. How is that even possible? Rhetorical question, I know the answer. Chaz, they are excessing teachers and creating more ATRs. You veteran teachers, with your heads in the sand should take notice.

Can they make Mulgrew an ATR?

Mulgrew is not smart enough to be an ATR.

we have a dictator running the union because the complaining, crybaby ATR's do nothing but bitch and whine!!! the happy and content teachers vote him in.

lets see if vladimir putin is willing to run for uft president didn't someone recently say he was smart?

Chaz,
This was hilarious. You made me laugh with this posting. I cracked up with the 2d Danielson component and obtaining kindergarten skills. FUNNY!

Chaz,
any coincidence that there will be more ATRS next year, and schools received anywhere from 3-10% less of the budget they expected? Also, any coincidence this is all happening with deblasio as of now losing control over schools? Something is fishy here.

Have not seen happy and content teachers. He might be voted in, but there is no happiness. Very rare and this is not coming from an ATR status staff. So get your perspective correct.

I have also heard that many schools had budget cuts, when staff raises were factored in and some schools were told to excess teachers and maximize class sizes to meet the tight budget the DOE gave them.

I don't know if this is DOE incompetence or a master plan of some sort. Time will tell.

I hate to gossip and talk about people so I will just talk about myself. My first stint in the rubber room was kind of crazy. I was not sure what to expect. That's where I first met Mulgrew and I am not saying his first name was Mike because I do not gossip.

Not sure what he was in there for but we had a "don't ask - don't tell" policy or an unwritten rule that was actually written on some board when we entered the rubber room. Mike was actually a nice guy and a great poker player even though we often wondered if and how he cheated.

Me on the other hand. I was fresh meat. Scared. There were some heavy hitters in there. Fifteen to nineteen of them ended up as APs, 12 to 15 end up as principals (9 are current principals), 4 deputy superintendents, 3 superintendents, 1 deputy chancellor and 1 current chancellor. Please do not ask me for names. It was like AA. We do not discuss names. I only will talk about my story.

I was a dean at the time and I asked a student for a pass and I told him to take off his hat. The kid lost it on me. He charged at me with clinched fists and bumped into me screaming, "Fuck you - fuck you white bitch. You are fuckin soft." By the way for the record I am not that white. I know I should have walked away but my instincts got to the best of me. I screamed back, "Who you callin soft? I am not soft! I am hard. Come see. I am hard."

One of my own professional colleagues or even my own UFT rep turned in me. It was not the administration. My colleagues wrote statements that they construed this as sexual. Sexual? Really? I was only reacting to the punk.

Ended up spending 9 months at 333 7th Ave until investigations realized I am the last person on Earth to hit on boys or girls. As a matter of fact ended up catching a second charge and spending an extra 2 months for supposedly having sex in the bathroom with a couple of cute female rubber room teachers. That's another story for another time.

Moral of the story: Was it Mike or maybe it was not Mike?

Fariña must have some dirt on Mulgrew.

@Shad
I was in the same rubber room. I think I know who you are. I ended up being moved to 168th street when the room got too packed. I was one of the guys who participated in yoga. I think you played chess and did karate. You exercised if I recall?

Predict principals will do everything in their power to hire lower salaried staff so as to not have to pay a high salaried ATR for vacancies. This will be a wait and see situation when principals get their budgets. They've got til 10/15 to put into place what they want before having to pay an ATR. Thank you Chaz for the valuable information you share to your readers.

2d & 3c are especially spot on
Once labelled as a "dissenter" one cannot not even petition, those gathered at a delegate assembly for a moment of silence to honor colleagues who have died in service.
Trust me.