The ATR Buyout Incentive Is Inadequate And Insulting. 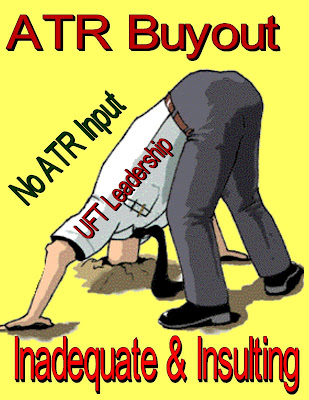 According to the UFT, ATRs who accept the buyout and retire or resign, have two options.  Option 1 is to receive a lump sum of $50,000 or option 2 is to receive $35,000 and get six months of health benefits.  However, if the ATR resigns to take the ATR buyout, they will no longer be eligible to receive the four lump sum payments of their retro money owed from 2009-10, which is 87.5% of the total ump sum payout and the 2% raise owed to them next June.that would cut deeply into the money received in the ATR buyout.

The major problem with the ATR buyout incentive is that the money is less than a half a year's salary for a 20 year teacher.  Moreover, teachers who want to participate in NYSUT's attractive Catastrophic Major Medical (CMM) plan would not be able to since you must be an active member as of January 1, 2018 and the ATR buyout incentive is only for the time period between June 5 to July 14, 2017.  Finally, many ATRs who are retiring at the end of the school year may have already put in their retirement papers and may not be eligible for the ATR buyout incentive since, according to Mulgrew's letter,  they must submit their retirement papers between June 5 and July 14.

Based upon the failure of the previous ATR buyout in 2014 that saw just 8.5% of the ATRs take the incentive, I suspect that the DOE will be fortunate if 10% take the inadequate and insulting buyout.  Honestly, I cannot see an ATR willing to resign for the buyout, maybe a few ATR retirees who haven't already put in their retirement papers might take advantage of the buyout but not many.

By the way, if you're an ATR assigned to a District, the new ATR agreement for the 2017-18 allows the DOE to place you in any District in your Borough.  Another loss for the ATRs.  Then again, our disconnected union leadership doesn't have to worry about what school they will be "forced placed" in.
Posted by Chaz at 6:01 PM

Was this the "secret negotiation" that no one was talking about?

Mulgrew is so clueless, it's scary.

none of u get it!!!
the retirement incentive was made so when the uft screws you with a placement at
a school you dont want- they can say "you cant complain, we offered you a buyout-
you chose not to take it"!

Just shows us how out of touch the UFT is! The UFT bargaining skills sell the members out all the time! Just look at how long it will take to get our retro pay-2020. With no interest of course. Now yet another bogus buyout and we have not seen the ATR "secret agreement" yet!

Is this for real?

Once again, Mulgrew colluded with Farina and the DOE. Of course, Mulgrew will sell it as the "deal of the decade". It just scrapes the skies.
Any ATR that accepts this deal is a fool. Just keep working six more months (until February) and you earn $50,000. As far as the $35,000 option, most ATRs have highly subsidized post retirement medical coverage from NY city office of Labor Relations.
Why would an ATR throw away $15,000? Why would an ATR forfeit their retro-active pay? Approximately one weeks pay for each year of service! PITIFUL. ...only a moron Mulgrew would put this out there. ATRs don't retire for this bait. Revoke your retirement papers and tough it out one more year!

The DOE and UFT are using this buyout offer as a census to find out: How many ATRs are financial MORONS?

"If you liked the 2014 contract, you are just going to LOVE this buyout offer."

I didn't receive this offer, is this because I have a provisional assignment?

I don't think the UFT understands the degree of hatred many of us have towards Mulgrew and the UFT. He needs to contemplate that, what a union is and his role in it.

The UFT is becoming a joke.

3 words: Don't take it. If any ATR thought the UFT/DOE was going to give a better "deal" then you were smoking some funny stuff. This is a shitty buy out deal but it could have been a Hell of a lot worse if Bloomberg was still around as he wanted to fire ATR's outright. If I was an ATR I would be a lot more pissed about the force placements. That fact would really burn my butt.

10:24
"Becoming a joke???" You are too kind. They have already achieved that status.

Pathetic!!!! all you experts on how bad the UFT and Mulgrew is yet he is still the leader. Most of you make me sick with your say all attitudes and do NOTHING spirits. NYCDOE worst school system in the country.

Most of us are in the ATR pool because their discriminatory policies put us there. Now they are doing everything they can to push us out. It is shameful and disrespectful.

they are not pushing you out- 8:23AM, they are actually placing you.
I thought thats what you wanted?
or is it all a show?
come on get real here.
if you beacame an atr cause your school phased out- guess what
it was a crap school with crappy students- same as the one yourll be placed in next year.

Any buyout that does not include an option to retire and immediately collect some sort of pension is doomed to failure.

This deal has made me decide to work an extra 2 years. More TDA, higher salary and retro. Thanks Mike.


Its too bad that the union does not have you on their negotiation committee. I get more information from your blog than the union provides. Never retire, we need you!

The Union us full of crooks, and do nothings. They will defend a corrupt and bad principal over a good experienced teacher.

Yah, then they replace you with a newbie.

Any word on a new financial incentive for schools to hire atrs? I'm not holding my breathe but you never know.

The UFT has not seen fit to inform us of that part of the ATR agreement which is disturbing at the least.

The BIG thing is the principals are refusing to hire us and the DOE won't force them. The whole thing is a facade to say there are no more ATRS.

The only people whom I see that would benefit would be those ATR's that really wanted to quit but felt stuck because of retro money. This would let them retire and/or quit and get somewhat equivalent money. I must say I don't know how many people that might be? I'd guess not many, certainly not enough to sell out the rest of the ATR's to be placed by borough with no choice in assignment. I mean wow, the change from District to Borough is a really big deal. Given what I believe the City is trying to accomplish with an offer like this, why not have just negotiated another retirement deal and offer it to anyone who can retire with the simple incentive that they can have the rest of their retro right now and get out (yes it should be pensionable). As for ATR's the only thing that should have been negotiated is if they want to quit they can have their retro and leave. Why in the world the UFT would agree to forced placement borough wide is just plain stupid.

Plain hypocrisy and nonsense. The DOE and its failed policies together with the corrupt UFT put us in this position.

UFT is being very transparent of their corrupt practices. All the heads should be thrown in prison.

This shows that everything that these field supervisors told us it was a lie. They told us they are here to find us a job when their main purpose was to rate us U.

The UFT gave back on forced placement in your boroughs as quid pro quo for the buyout.

A buyout that nobody wants

Disgraceful! Thank Goodness for 25/55 Im out of this Insanity come October!!!!!!

Michael Mulgrew is a disgrace for the Union, and students of NYC for allowing discriminatory policies against veteran teachers.

The UFT has sold us out again!

I say 28 total will take it. The full agreement is circulating on Facebook. Says nothing about hiring incentives, nor evaluation, but does state the DOE can choose to keep circulating you if you were made an ATR due to a 3020-a.

Pretty much they do whatever they want. Who needs this nonsense?

They should make the ATR field supervisors go away with the agreement. They are useless.

They are probably going to put ATRs in bad schools with bad principals.

This is true, I just had it happen to me, and during my entire teaching career I always received satisfactory ratings.