I Support Lower Class Sizes And A Certified Teacher In The Subject Area Being Taught. 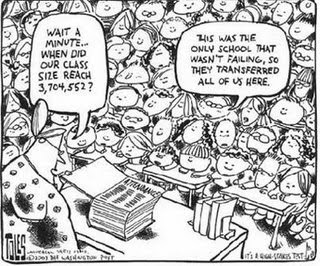 I'm glad to see that a group of parents, along with Class Size Matters, Alliance Of Quality Education and Public Advocate Letitcia James has filed a complaint that the DOE is violating the 2007 CFE agreement that was supposed to reduce class sizes.  The DOE, rather than reduce class sizes, actually saw trhem increase since 2007.  Despite Mayor elect Bill de Blasio's campaign promise to reduce class size in the New York City Public Schools, his appointed Chancellor, Carmen Farina,  actually allowed class sizes to increase, especially in K-3 grades which has increased an astounding 15%!

Part and parcel with the highest class sizes in New York State is the DOE's tact approval to allow schools to use teachers not certified in the subject their assigned to instruct students in.  This is especially true in the Middle Schools and in Earth Science, a Regents course in both Middle and High School.  If parents knew that uncertified teachers were instructing their students, especially in a Regents subject, they would be up in arms and claiming educational neglect. In addition, most schools, to save on hiring Science teachers, have gone to an educationally inferior 4-1 program when the Regents is based upon a 5-1 program.  The result is a lowering of Regents scores for schools who have a 4-1 program.  How is that good for students?  Its not of course.

Finally, how many ICT classes fail to have a certified Special Education teacher as a co-teacher?  Far too many I'm afraid.  Moreover, how many limit the ICT classes to 12 or less students with IEPs and are they capable of handling a large class?  Further, are these students getting the professional support they are entitled too?  My experience tells me that many of the Special Education students are underserved and some, with more severe disabilities, need to be in a self-contained environment and not large class settings where they struggle mightily to academically survive..

Now it seems that inexplicably, school budgets have been reduced from 92% of their fair funding to 90% as the DOE failed to account for rising staff salaries and blame the already tight budget and the further reductions on the union contract and not on their bloated Bureaucracy.  Expect class sizes to be at contract maximums, teachers pushed to teach a "sixth class",  and pressure to remove veteran teachers from the school's payroll by filing 3020-a charges or harassing them into retirement.  Furthermore, look for shady administrators to cut corners by not providing services to Special Education students and using inexpensive and uncertified "newbies" to teach the most needy of students. Instead of solving these problems, expect it to continue until the Mayor removes Chancellor Carmen Farina and her Bloomberg era policymakers and selects a leader who puts education first.
Posted by Chaz at 8:20 PM

There's no accountability for not following the rules, so this will keep happening. Due to the wasted spending on bureaucratic nonsense, the money isn't there to pay for additional teachers, which is what meeting this mandate would require.

All this despite the city having a SIX BILLION DOLLAR SURPLUS! We need to cut school budgets, because how else can we hire more lawyers, consultants and administrators? Mulgrew-Tweed = Trump-Putin.

Keep it up "Punchy Mike", you just keep implementing the Reformyist agenda.

Many of next year's individual school budget's are necessitating excessing. I've come across several teachers that are besides themselves with grief and panic. They are in the middle of their careers and just at the point they are becoming pricey. They were excessed because the veteran expensive staff couldn't be touched because of seniority. Those teachers have been harassed all year and have received their first ineffectives in their careers. Several principals have told the staff they would all be teaching six classes next year and class sizes would be at max. Many seem happy about the sixth class, as it gives them more money. They don't seem to consider that sixth period is in part allowing for this excessing. None of this correlates with the fact that the city is awash in money. The UFT should be all over this - middle of the salary road teachers excessed and turned into ATRs, veteran teachers targeted for incompetence or with harassment, and class size that will explode in September - and let's not forget the whole disgusting ATR scenario. Then there's these skyrocketing medical bills for inferior options. Maybe it is time people picket Mulgrew's private residence. His incompetence has brought anxiety, stress, and more bills into our homes. Perhaps he needs to see the people he's affecting and our families. He's supposed to be our leader and looking out for us.
What does he have to say about any of this?

All of the DOE money goes to central where they continue to make up these ridiculous titles for failed admins. The head of ATRS Mr. Asher is a great ex! DOE needs to clean house and bring the resources back to the schools and the students!

I think we need to redefinethe terms in your post. The excessing of the ten year people cannot be called the excessing of mid career teachers because they are the senior people in most school buildings in NYC schools. The twenty year career teachers in high schools are mostly gone. You can probably could on your fingers how many 15-25 year veteran teachers there are in each borough. So I think these excessed teachers were the senior people and the DOE is going after them. The motto of the DOENYC should be everyday you work is one day closer to being dismissed, discontinued or ATRdom. So it is not surprising they are now going down the foods chain. As a sub, I rarely see any senior people and those who I have known have retired or will be very soon. This excessing of mid career teachers needs to be defined as the excessing of the now senior teachers.

Charter schools can hire teachers with 30 hours of classroom experience-http://blog.timesunion.com/capitol/archives/276097/ny-teachers-with-30-hours-of-experience-charter-school-proposal-stirs-debate/

Miracles do not occur in self-contained classrooms. Self-contained is the kiss of death for the Sped teacher since these teachers are expected to teach the same exact curriculum and students are expected to pass the same exact tests. Trust me, if you had a learning disabled kid you would not want them in the self-contained dumping ground. ICT is a much better model for instructional delivery and social development.
Bottom line: Some students are fundamentally incapable of engaging in academically rigorous work and other students get the material but are just bad test takers. We need an entirely different academic model for the learning disabled/ emotionally disturbed students and an entirely different evaluation rubric for the SPED teachers. It is practically impossible for a SPED teacher to be rated highly effective using the Danielson rubric since HE means a student-facilitated classroom. This is a real problem that the UFT completely fails to address. Until the STATE stops requiring SPED students to take and pass 5 Regents exams then self-contained is a complete waste of money. SPED & ESL teachers can not and should not be judged using the same rubric that evaluates teachers of AP and gen ed students. Totally ridiculous!

WAAAA, WAAAA, WAAAAAAAAAA you all sound like babies in wet diapers. stop crying and actually try to do something!! if not, as the song goes "see you in september"

Have to agree with you on just about everything you mentioned except for Mr. Asher being a great ex. Mr. Asher is a very successful, bright and decent administrator. He is an excellent educator and great for the system. No matter where he has been he has had success.

Farina told us four years ago she was only doing 6 months to a year to help transition a new Chancellor. How can she lie and get away with that nonsense? IF she wanted the job why not be upfront about it?

Where is the discontinued MORM fela?

shad c
never stop posting.
you are by far the best thing to happen to this blog.

Most administrators I have talked to want to provide as much services to Special Ed students as possible because they feel a special connection with those students.

Many of these administrators told me they have always felt and thought to themselves "how much better in school they would have done if their schools provided them with real services when they were students". After they would admit this to me then they'd ask me to bring in my UFT rep.

Not sure if any of you have had this discussion with your current administrators?

Where's that 'mom's basement' fella that used to post here (at threat length) all the time? Between the time of 'MORM' and Shad C. Funny how those three never overlapped. Hmmmm...

I love Shad C too. Whoever they are...

Farina is raking in over $400,000, which includes her retirement money that she's collecting on the job. And what the fuck does she do? She's Klein in a bad wig and fat suit. Every moron that he hired, which includes lawyers and principals that are rejects from Burger King's management program are still in place. This while senior teachers are harassed, turned into ATRs and offered 50K to leave. The Mulgrew should raid his personal piggy bank, the UFT coffers, and offer her half her salary to leave and see if she takes it. He'll never do it because she smiles at him and DeBlasio acknowledges his presence in a crowd.

Yeah, Shad is MORM and the troll - definitely not an ATR, but entertaining regardless. Shad, start you're own blog and stop hijacking this one - and yes I'll read it faithfully.

Asher's position is a waste of money. Administrators are in abundance. DOE doesn't know what 'positions' to create anymore.

Look I said Asher is a nice decent successful educator. I never said his position is needed and not a waste of money BUT now that someone brought this up then it should be discussed.

You are an asshole!