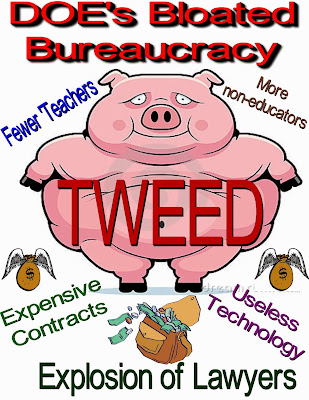 If you're a regular reader of my blog you know that I believe that the DOE wastes millions of dollars on a bloated bureaucracy, short changes schools of needed resources and funding, and implements policies that keep experienced, veteran teachers without a classroom. In addition, the DOE is considered the enemy and not a friend to the classroom teacher, the same as under Mayor Bloomberg.  The reason is the ideology of the Bloomberg era remains at Tweed.

Nowhere else in our country would a school district be allowed to spend money so lavishly on their own creature comforts  and expensive consultants at the expense both to the taxpayer and the students they are supposed to educate.  Yet the DOE wastes countless millions on their ideological pursuit of data mining, teacher accountability, and lawyers.  Moreover, the DOE allows 1,300 to 1,600 ATRs to act as substitute teachers and is estimated to cost over $100 million dollars annually.  Finally, their school-based fair student funding encourages principals to hire "the cheapest and not the best teachers" for their school.

The present DOE budget is 29.2 billion, that is a 7.3% increase since last year and a 22% increase since Bill de Blasio took over as Mayor.  By contrast, teacher salaries have only risen 5.5% since the Mayor took over the City and schools have only seen a 3% to 6% increase in their funding.  If you realize that 4,500 teachers leave the system every year and are replaced by cheaper "newbies" the overall teacher salary has probably changed little or even dropped.  Further, class sizes have remained unchanged and are the highest in the State.  Rather than hire more teachers and add more seats, the DOE encourages schools to give a "sixth period" to teachers and stuff as many students as possible in any one class.

.......and Namita Dwarka of Bryant HS, Queens NY, is a worthless skank.

I thought the DOE was making schools pay for the 6th class? Still true or not?

In most cases that's true but some schools got an exemption.. Forest Hills for one.

I agree totally and want to raise another BIG concern. Todays Newsday (a very liberal editorial page) has an attack on teacher pensions. The NY Post is one tabloid you expect this type of opinion, but Newsday? The call for a constitutional convention is a very real danger to teacher pensions and benefits. I note this on your blog as your readers are no doubt real union folks and we will need all the troops to make voters aware come November to say NO to the proposal of a convention.

The Bloomberg /Klein "reforms are now part the DOE's DNA.
What make you think the next chancellor will "clean house" ?

Most people in NYC support Democrats and the Left in general. As teachers we see nothing but graft, corruption, inefficiency, stupid reformy stuff and injustice on an unimaginable scale perpetrated by Leftists and Dems. How exactly are Democrats and their ideology making things better here, when there is not a single person in the DOE above teacher that I trust?

Newsday consistently attacks teacher pay and benefits. They see it as red meat to toss to their property-tax hating constituency. They also went all-in on Common Core, exam-based teacher evaluations, and NYSUT bashing.

Newsday's stance is that selfish teachers and their all powerful teachers unions stand in the way of educational progress. Fantasyland.

On the bright side, the residents of Long Island have been voting yes on their local school district budgets in overwhelming and increasing numbers and margins these last five years or so. Record setting margins in fact.

So Newsday is feeding the backlash. As a matter of fact one suspects the more they bash teachers the more the public supports teachers and parents.

The chancellor likes her and all the other skanks for the same reason. That they are there to destroy the public schools and get rid of veteran teachers. That is their mission. That is what corporate interests dictate.

Namita Dwarka from Bryant HS is worthless piece of dog poo. Came in as a loser and will leave a bigger loser. Her own Guyanese community thinks she's a worthless loser.

How does a school like WJPS which does not supply students with text books and cuts everything to the bone have the ability to take European trips with students during February break ? Who is paying for the AP's to chaperone these trips?