Ballou High School Where The Graduation Rate Was All Smoke And Mirrors. 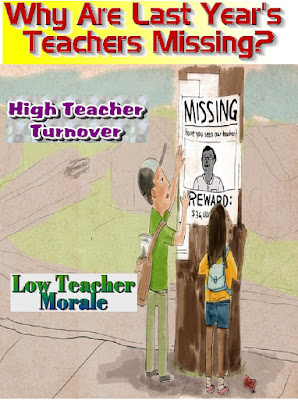 Ballou High School in Washington D.C. is a school with a deep poverty minority student body and has historically struggled academically, with a low graduation rate.  However, in 2017 Ballou High School dramatically improved their graduation rate and every graduate was accepted to college.  The school's success became a national sensation of how real education reform can improve even the worst academically struggling school.  However, NPR did an expose of the 2017 graduation class and found some very disturbing issues that questioned that success.

High Teacher Turnover:
Ballou High School suffered the highest teacher turnover in the City with 25% of the teachers leaving the school by the end of the 2016-17 school year, many of them in the middle of the term.  Most of the teachers who left cited low morale, administrative pressure to pass undeserving students, and poor student discipline.According to an internal memo only 57 seniors were on track to graduate in April.  The remaining 107 seniors were given massive amount of credit recovery and projects to meet their graduation requirements, despite the fact that many students did not qualify for credit recovery since they didn't bother to show up to their classes.

College Ready:
While its true that all 164 2017 graduates were accepted to college only 16 actually enrolled.  The main reason was the dismally low test scores. Only 9% passed the English test and 0% passed the Math test. Even the students realized that they were unprepared for college.

The Principal of the school has been reassigned and the school district has launched an investigation but will anything change?  Probably not, once the media scrutiny disappears.  Ballou high school will continue to graduate unprepared students where the graduation rate is all smoke and mirrors.

This story sounds so familiar!! You could be talking about the high schools in NYC!!!

It seems like articles like this pop up every few years. The school is raked through the coals, the principal is re-assigned and then everyone forgets. Only to be shocked, SHOCKED, when the same thing happens somewhere else.

It's the teachers fault, always. Is the tagline here.

This is the work from Michelle Rhee who sabotaged the system in DC. She was originally put on a podium but soon enough people saw what she was really about after she scolded a child and put tape on the kids mouth! Rhee then moved on and married a washed up ole NBA player and is now a sales person pushing some dumb product. The school reform in DC is a complete sham and really a sad story of people filled with hate wanting to destroy public education for the love of money.

So so sad and we can only hope that the goons will never make it to NYC public schools. I mean how much do we have to endure looking around the country, DC, Michigan, OHio, COlorado and many more where the idiot school reformers are making a complete mess of the education systems screwing things up and then going to the media with fake news about how great they are doing. PT Barnum has resurfaced here on earth and he has made his way into education.