The History Of The ATR Pool. 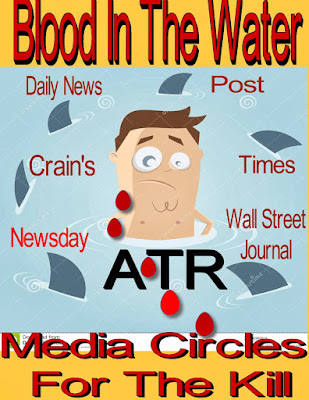 Thanks to our disconnected union leadership, they negotiated away two vital programs that allowed the DOE to create the ATR pool.  The first was the seniority transfer system that allowed veteran teachers to bump untenured teachers if they wanted the position.  The second and most important program the union agreed to eliminate was the right to bump less senior teachers if the veteran  teacher's job was eliminated.  This is a basic program for all Civil Service employees and the union agreed to this on the condition that the newly created ATR cannot be fired for not having a classroom position.  The DOE eagerly agreed to the condition and from day one in every contract negotiation the DOE has tried to renege on the deal by asking for an ATR time limit.  Failing to achieve their goal of obtaining an ATR time limit, they have gone to great lengths to tell the media that the ATRs are "bad" or "unwanted " teachers.   Now that the DOE is sick and tired of shelling out $150 million dollars annually for the ATR pool, the DOE's decade long disparaging of the ATRs has made it difficult to place them.

Fast on the heels of the terrible 2005 contract was the implementation of the destructive school based fair student funding (fsf) that penalizes schools who hire veteran teachers since under the fsf the average actual salary of the school is used and it incentives principals to "hire the cheapest and not the best teachers" for their school. Moreover, with schools funded at 85% of their fair funding, raised to 90% (apparently its only 87%( this school year, this further pushes principals to hire as cheap as possible.  The union leadership know full well what fsf meant to the ATR pool as an influx of veteran teachers were excessed due to the 162 closing schools and reduced programs as the new small Bloomberg schools that replaced the larger schools hired mostly a "newbie" teaching staff and few veteran teachers were selected.  At it's peak the ATR pool was close to 2,400 educators.

Over the years the DOE has tried to offer incentives to principals and buyouts to ATRs with limited success.  The two ATR buyouts were so inadequate only a total of 226 teachers actually took the buyouts and almost all of them were retiring anyway!  As for the incentives, the only one that had a significant impact was the November 2009 incentive that allowed principals to hire ATRs and only be responsible for the salary of a "newbie" teacher. This also coincided with a hiring freeze.

Over the years the ATR pool has slowly diminished as ATRs have retired and until next school year there were few school closings.  However, with two large high schools having staff reapplying for their positions and 14 school closings, the ATR pool will probably increase from the 1,202 at the beginning of this school year.  One negative change for the Caren Faina years was that the DOE set up three lists of ATRs.  The first were from closing schools and programs and were the only ones offered by the DOE to be hired by schools.  The second list where for ATRs who received unsatisfactory or ineffective ratings and the final list were ATRs who won their 3020-a hearings and were excluded from the hiring list by the DOE, unless there was no other ATR available in the subject are in the Borough.

What the future holds for the ATR pool is in question. Will the new Chancellor eliminate the fsf and force schools to absorb the ATRs or will it continue as is.  Only time will tell.

Union busting with the UFT's help. Randi was a business woman/attorney.....and a friend of Mike Bloomberg. Entirely by design!

The tides are changing! The DOE must give ATRs permanent positions and put an end to this insanity!

Contract is up soon too!

It will continue as is. They are only concerned with placing cupcake newbies in permanent positions to make tenure a thing of the past. THEY WILL NOT PLACE ATRS IN PERMANENT POSITION TO FINISH THEIR PROJECT /AGENDA OFF. Atrs's will continue to treated like nonexistent trash. If you have over 10 years---make your reservations into the atr pool. Everyones time is coming....tic toc tic toc......

"The tides are changing"?

Have you lost your mind? The opposition has gotten stronger!

On top of all we have field supervisors going after ATRs. Who voted for ATRS to be observed?

Let's not forget that every time a veteran Tier IV teacher is excessed or pushed into retirement, that position is filled by a substitute or a Tier VI teacher. Thereby eliminating a better paying job and replacing it with a job with less benefits and salary.
Those Tier IV jobs are then gone forever.

I hope I can make it!

Why is the UFT allowing Field Supervisors to have a blank check to go atfer ATRS?

Some friendly advice to teachers:

Keep it in an empty pocket and set it to “record.”

In that manner, when you are observed unannounced, you will have an audio track of what was actually said during the lesson.

And when recording pre- and post-observation conferences with supervisors, make sure that you’re sitting close to the supervisor, and that the outside environment is relatively quiet. (Don’t start a conference while the halls are filled with students.)

You will be helping to protect your job.

I cannot see the future of the atr pool changing.

Principals for over a decade have been told ‘hire who you want. Teachers won’t be forced into your school’

For what this system wants, let the millennials come in and get burnt out for 5 years.

Let me get paid, contribute to tda and retire in 15 years.

This system sucks. This job sucks. Let the millennials deal with kids complaining and cursing at them.

However, if my kid wants to go into teaching, she will not get a dime for college from me.

If you’re dumb enough to go into this job today, then you may as well throw the 100 k for a college education down the toilet

I haven't taught a full lesson since October? November, maybe? To be honest, I am getting too used to the comfy environment. I am so used to not being expected to do anything, that when the inevitable time comes where I will have to teach, I wonder if I will able to. Sure, I know what to do. What bells and whistles to include and how to engage kids. I try not to get too comfortable, even though I am placed in one of the top schools in the city. Just enjoying the stay for now.

I am 51. I have between 5 and 10 years left. I'd like to make it to 62 because that is the last year I will be dealing with paying for a college education, but once I hit 55, it's year to year for me. Once they attack me, it's two years more and out one step before the fake 3020a. And I intend to spend the last two years letting the tongue I've been holding for YEARS free to tell it like it is. I look forward to being able to see bullshit and call "BULLSHIT".

As far as the ATR thing goes, I don't even know if being in a classroom is better at this point. I used to love going to work every day when I had a position and before the system went insane and put this big target on my back. Now. I look at what these young cupcakes deal with and the fear and stress that doge them constantly and I'm not sure if it's any better. As a matter of fact, this ATR gig has some advantages. Sure, you have no name (you're called 'ATR' or 'sub'), the kids treat you like crap and the admin ignores you at best, and shits on you at worst, while colleagues avoid you, afraid of "catching" what you've got. But, on the other hand, my time is my own, I can daydream through Teacher Torture Mondays and Tuesdays, no one is trying to kill me with meetings, and I have no paper pile. I go home and I can parent my kids, read a book, cook dinner, and have my time to myself. No more Sundays spent planning while everyone else goes to the movies or out to lunch. And I get paid double to do so much less. Is this really the shorter end of the stick? I'm not sure.

I also told my kids, years ago, that UNDER NO CIRCUMSTANCES will they go into teaching on my dime. They may be legal adults in college, but that doesn't mean I have to write the checks or cosign the loans. And I will not. This is the only job I know where they give you a position and then ACTIVELY look for ways to take it from you. You are abused by everyone, blamed for everything, the stress doesn't end, and in the end, you are attacked and humiliated until they can be rid of you. If my kids want help in living that life, they need to start fundraising for themselves because it isn't coming from me. I'm more likely to help them open a brothel in Vegas than become teachers. The brothel owner is more respected.

From what I hear, 11 ATRs have signed up to Attorney Bryan Glass' ATR Class Action suit.

Instead of waiting to get hammered with upcoming agreements and contract negotiations, this is where ATRs can take ownership of change and pushback.

Bryan set up this page for information to join. He is taking members up until February 6, 2018.

There should be a lot more than 11 signing up for this lawsuit. We can't keep complaining, blogging, and reading articles- we need to take action. Is it the money? Please explain.

At least we have Field Supervisors harassing us thanks to our useless Union.

Most people in the ATR pool or in the rubber room are in their
50s. Coincidemce?

The union's failure to protect their senior teachers is disgraceful and for the UFT to allow Tweed to practice ageism in the teacher removal process is aiding and abetting the DOE practice of age discrimination.

Fair student funding is responsible for age discrimination , including but not limited to : negative observation ratings, being told harassing lies during your post-ob , being over-scrutinized on a daily basis as administrators look for anything they can call a problem even when it isn't a problem, being treated differently than younger teachers and told you didn't do enough of something during the lesson, false accusations, principals having derogatory conversations about you with parents in an effort to gang up against you, closing schools and dismissing only older teachers who have to go on interviews that they will never win, being unfairly targeted for termination charges, being ATRed and therefore sent like a bag lady or man from school to school. And the list goes on. And this is ALL the result of Fair Student Funding