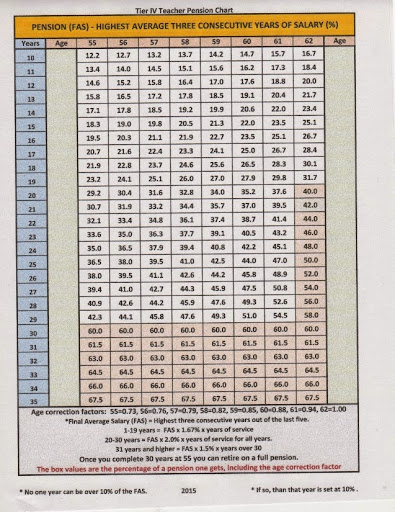 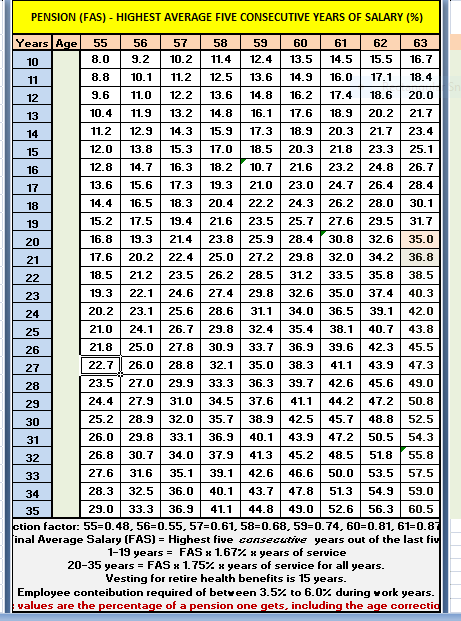 For example if we take a Tier IV teacher that retired after 25 years of service.  He would receive 50% of his FAS.  On the other hand, the Tier VI teacher would only receive 43.8% of his five year and lower average FAS.   Even at 20 years, the difference is significant,  The Tier IV teacher would receive 40% of his three year average FAS, while the Tier VI teacher would only receive 35% of his average five year FAS, While reaching his or her full retirement age one year later.  Of course, I suspect that few Tier VI teachers in New York City will be vested, least not to make it to their full retirement age.  Maybe one out of seven or eight (12% to 14%) would be my best guess.

Yes, but you will have no income for those three years.

I jumped on the 25/55 program when I possibly didn't have to. I'm looking at turning 55 at the end of my 32nd year. That should be full retirement correct. I've been told I could technically get out at 47/ with 25 years in the system but the prospect of sitting around for 8 years with no income makes that pointless.

What about the 27/55 program? The person I spoke to from TRS and the UFT told me that I am 27/55 and can retire when I am 55. I was appointed when I was 27 in 2013, but was already in tier 4 thanks to my previous work as a sub. I know that unlike previous tier 4 members it is 15 years for me to be vested and I have to pay more for my pension, but according to everyone I spoke to I can still retire at 55.

Chaz, I am in 25/55. What are your thoughts on it? Did most people you know take it up? Why would someone NOT want to be it it?

Do you think that the DOE will ever have a "20 and out" program where you get 50% of your salary at 20 years? That is what the cops have. They get paid a hell of a lot more than teachers and do not need a masters plus 30 to get to top salary.

A very devious scheme. 5% tops would make it to retirement with this nonsense. A moot point however, in 5-7 years there will be no DOE - it will all be privatized, except for specialized schools.

This is why "they" are using any means necessary, even illegal, to get rid of Tier IV teachers. If you are Tier IV , you have a bullseye right on your forehead.
Bill Gates and his crew of merry men are foaming at the mouth.

TRS gives us the interest in January.

In 40 years in the biz I never met anyone who retired before they could collect...but you never know I guess.

What iare the differences between Tier I, II, III, and IV?

Teachers used to say Tier IV was inferior to Tier I.

True. Tier I was the most generous. Tier II was not as good. However, Tier III is the worst. It included a Social Security takeback and when Tier IV came in most Tier III teachers were allowed to join the Tier IV pension plan.

Schools won't be privatized in 5-7 years, no way. There will be a dilution, no doubt, but not an entire dissolution. Additionally, they will always need the union schools to take the most troubled students. These are the kids the charters won't desire to accept. If I was just starting out, a Special Ed. License would be the first thing I would do if I wanted to get hired.

The greatest threat to jobs will be automation in this field, As I understand it, they don't have the broadband capacity in each school, nor the facilities to more fully automate instruction. If they ever get it, bye bye a great number of jobs, especially being on the cusp of Artificial Intelligence, and Robots. But teachers won't be the only workers displaced because of this technology...it will be massive work change on the way.

30 years of service at 55 years old, which is where many first career teachers are, gets you 60% of final average three years of salary in Tier IV. We retire with dignity.

That same teacher starting now who puts in 30 years and is 55 years old will get 25.2% of final five years salary under Tier VI. That is unbelievable. Andrew Cuomo is no progressive. He pushed this Tier VI back in 2012. And, one has to pay into the system for the entire career unlike Tier IV where we only pay for ten years (I know the 25-57 Tier IV pays for longer). Make no mistake about it, Democratic primary voters are generally to the left and want decent pensions for teachers and other public employees. This comparison should be thrown in Cuomo's face for his 2018 reelection and if he dares to run for president in 2020.

Please stop posting wrong information.
Somebody should post the correct information .
Something like your pension is based on the highest three years of salary not the final three years.
I’m getting confused please somebody post as much as possible when you retire, for example if you’re in the 25/55 and you retire at 62 you get back all your money you put in.

Question: If have been contributing towards the 25/55, but once reach years the person is only 50 years of age, but wants to work til 55 would the person receive a pension as if worked 35 years?

Anon 7:44
The FAS is usually the last three years which are the highest earning years. Therefore, for 95% of the teachers the final average salary is the highest three years. Stop nitpicking.

Chaz, what happens to the extra money contributed into the 25/55 if have 30 years service at 55?

Anonymous 7:44, you are either a phony or you are away with the fairies.

Chaz has a total of 60 posts on retirement and pension. Read all of them and read the Retiree Companion available on TRS website. I've read it all and feel I am informed and prepared for my tier IV 30/55 retirement in a few years (Can't wait to turn 55 and finish my 30th year at the same time and say buh-bye to the hostile work environment created by the DOE). I do have some lingering questions. One of which concerns Chaz's comment on January interest deposit. My monthly account balance reflects interest earned in my fixed fund each month so I still don't understand what Chaz means by January interest being more important than the other months.

Ahhhhhhhhhhhhhhhh another free week in the high schools. I love regents week. Next Monday, free day. Feb break coming baby All Inclusive. Yummmmmie! Spring break end of March into April. Seeeeee yaaaaaaa! Couple of Effectives here, couple of Highly Effectives there, throw in a Developing and we have a nice recipe for a 5th straight year in Danielson. Get me to 55 baby! Sweeeeeeet! Queen of England signing off.

Chaz I have a question.

All NYC teachers are Tier IV unless you were a public employee under Tier V before joing the nyc teaching profession.

Chaz, Are you stating that we get 7% interest monthly but that it is compounded annually in November and paid in January. WHAT IS MEANT BY TRS PARTIALLY COMPOUNDS THE INTEREST IN NOVEMBER?? THANKS

Are the retro payments included in FAS?


How do sabbatical effect FAA?

Hi Chaz, would you know why they sometimes use the last consecutive 5 years salary instead of 3? Thanks!

We get 7% simple interest, based on our TDA balance at the start of the calander year and continues until Novemeber At that point TRS adjusts the increment to account for the Novemeber TDA balannce. Or so it was explained to me.

If for some reason , like a sabbatical or Leave without pay, that year would not count, that is why you look back five years.

I also asked the UFT of retro payments were included in FAS, but the person I spoke to did not know, and said I had to ask a pension expert.

The 2% retro is included in the pension calculations but the lump sum payments are not.

OK you had told me that I was a tier 5 in the past when I told you when I was hired in one of your old posts.

Thank you for your explanation of the 7%.

Chaz can you please advise ?
Thanks

Chaz do you think it’s okay to retire in the middle of a school year let’s say 1/2/2019 if you feel you had enough ? You still get some summer pay ?
What if you retire with negative 6 days in your CAR how does the city get that back from you ?
Thanks for all your invaluable info

They are paid separately from the pension distributions ?

No reason, except I would wait until 2/1/2020. The end of the first semester to get my full July checks.

Is the age penalty prorated? How does TRS determine age? If I am 58.5 years old, what penalty do they use? Thank you.