Why Mayor Bill De Blasio Has Been A Failure For NYC Schools. 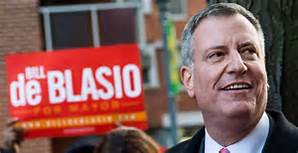 Many educators were excited when Bill de Blasio came from nowhere to become Mayor of New York City.  After 12 suffering years under Mayor Michael Bloomberg, we looked for better things down the road.  How wrong were were.

First, he appointed as Chancellor Carmen Farina who was a Deputy Chancellor under Chancellor Joel Klein and supported many of his and Mayor Bloomberg's anti-teacher programs.  Instead of "cleaning house" she kept 80% of the Bloomberg policymakers at the DOE and she was more the problem then the solution when it came to fixing the New York City schools, Chancellor Carmen Farina's legacy is she maintained many of the destructive Bloomberg polices like school based Fair Student Funding, the Charlotte Danielson rubric used as a weapon by administrators, and  the targeting of veteran teachers using the 3020-a process to name a few.

Second, despite claiming he would reduce class sizes, it has actually increased during his first term and to make matters worse, he failed to reduced the extreme segregation of the schools due to the high school choice program that allowed the higher achieving students, mostly Asian and White, to be selected by the far too many specialized and screened schools.  The result is the lower achieving minority stuiden6ts are relegated to academically struggling schools, especially the Renewal Schools.

Third, his lax student discipline policy is a disaster as staff and students feel increasingly unsafe as the disruptive and violent students are simply given a talking to (restorative justice or a warning card) instead of being suspended or arrested.  Moreover, his lifting of the student cellphone ban is disrupting learning as students are distracted and instead of concentration on the teacher they are texting or looking at videos on their phone,  Finally,  the Mayor has failed to stop the flow of weapons brought into the schools by students as confiscations have skyrocketed during his first term as Mayor as these students no longer fear suspension or arrest..

Finally, he has failed to eliminate the bloat at the DOE Central Bureaucracy that eats up an every increasing budget while schools suffer from recession era budgets and are only funded at 90% of what they should be receiving.  Let's not forget that the ATR pool still exists and with 1,200, mostly veteran teachers, without a classroom and costing the DOE over $150,000 annually.  No other school system would tolerate the waste of money and the responsibility lies at the door of the Mayor.

The bottom line is that Mayor Bill de Blasio should spend his second term doing the following:

I'm not saying Bryant HS Principal Namita Dwarka is easy, but I'm told she's been on more weiners than Heinz ketchup.....if she were a cookie, she'd be a whoreo.

Bill is not a bad guy. He is a lazy guy. He needs to clear house at the DOE, get rid of the lawyers and all the idiots that are running the circus. He needs to put in a real educator as Chancellor who actually cares about teachers and kids. I was around when Rudy Crew was in charge. He was a great guy, the schools were run in a democratic manner and the UFT and DOE actually worked together in a reasonable and productive manner. There were no "gotcha squads". Hardly anybody get sent to the rubber room. Teachers who were tenured were left alone to teach in peace. In a nutshell, it was the best years of my teaching career where I and all of my colleagues were happy. Today, I am a shell of the person that I used to be. Fear, distrust, and anger are felt by all of us in the schools. I am hoping and praying for a real change with a new contract and a new chancellor. This could be the opportunity to bring joy back to the once great teaching profession in NYC. Let's do this!

Whites and Asians are often lumped together to show 'segregation.' However, white kids are a dwindling share of the student pie in NYC and Asian kids are surging in numbers. They are actually outperforming white kids now.

Rather than social justice activists trying to get a white kid to sit next to every black or latino student, it would be better for them to now shift focus and try to get an Asian student to sit next to them.

Oh, I forgot, Asian parents can discriminate against blacks and Asians and no one ever says a single word about it! The next 20 years are going to be quite interesting as Asians become the overlords in this land. At some point, the social justice warriors are going to go after them as hard as whites. There will be a lot of fireworks then!

The Legal Department and bad Principals are destroying the most experienced teachers.

Hey, give ole' Bill a break. He just called a snow day!

No school tomorrow, and possibly Friday!
Thank You, Mayor D!

Will Namita Dwarka,WC Bryant HS, Queens NY, be eating clams or hotdogs on this snow day? Total FILTH. Maybe her EX Mr. Kwait can feed her a decrepit dog and as far as clams are concerned, she has plenty of takers in her cabinet. Hollow, empty, confused neophyte.

You pushing it with Friday. Not going to happen!

Chaz, Carmen Fariña was a Deputy Chancellor, not a Deputy Mayor, for part of the time while Joel Klein was the Chancellor. In fact, she was the Deputy Chancellor for Teaching and Learning, a position which is currently held by Phil Weinberg.

To those people who feel that certain principals don't have adequate "moral character," the NYS Education Department has an investigative procedure which can result in license suspension or revocation.

Read about Part 83 of the Regulations of the Commissioner of Education:

Thanks for catching that. I guess i HAD THE mayor on my mind when I wrote the post.

The above link is also useful for anyone who wants to file a professional discipline complaint against a Principal or Assistant Principal. For example, a parent or teacher can file a complaint about a service, treatment, or illegal practice and if the accusation is substantiated, the Principal or AP can have their state license revoked.
It's another tool that is out there for us. And we all know there's lots of Principals and APs that hurt children because of their bad practices and tempers and power trips.

To 10:22 re lodging formal complaints against administrators, you must be new around here and have never read Chaz's blog much.
If you had read it, you'd have seen that complaints against administrators go straight to the circular file.
An AP or principal can do drugs on the job, produce semi-porn videos, be engaged in all kinds of sex or financial hanky-panky and NOTHING happens. Things only happen if word gets to the Daily News or the Post. They only get slight slaps on the wrist and get shuffled around.
The city boasted that it got the admins to give up tenure. Hah! They've got better job security than any teachers do.

If you are a teacher and you make a complaint, get ready to have surprise observations or get visits from the NYC gestapo aka OSI.

Well it can be done anonymously. you can also encourage a parent to do it if they have a serious complaint. The link I shared is for the New York State licensing/ discipline board. And it's not a joke or a waste of time like a city agency.
I'm not new or naive. I once filed a complaint against a doctor with this same link. They took my complaint very seriously. Did a thorough investigation, and the doctor now has a record of misconduct against her license. And she deserves it.
This link provides people a chance to go outside of the club where the Licensed individual has no friends.

There is massive fraud, and a lot of Principals are targeting veteran teachers and our Union is becoming a joke. They should dismantle Legal.

A lot of these supervisors are destroying careers of good teachers like Dwarka or Cruz.

Fariña has been a disappointment, and has lied to teachers.

NYSED’s Office of the Professions does not handle the discipline of principals and assistant principals.

The correct NYSED office for investigating and possibly disciplining licensed pedagogues is OSPRA (Office of School Personnel Review and Accountability).

Their procedures are set forth at the URLs for Part 83 of the Regulations of the Commissioner of Education.

They're not going anywhere...they are the Ivy League Mafia...they always win.

Unbelievable. She really knows how to bring a school to the ground.