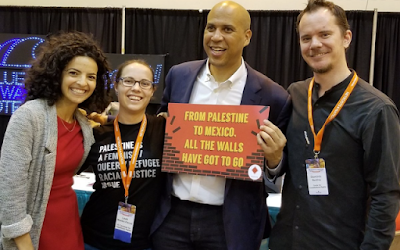 with trump in office shows how morally bankrupt we are! we talk about AMERICAN values what crap, if there is money to be made we would sell our mothers! be honest we don't care if a person has values, morals or integrity our president is proof positive of that!

you are complaining about TRUMP? would you like Deblazio as President ? Mr No discipline is schools..cant run a bakery..

or maybe Bernie ? let the Boston bombers vote
Trump has his flaws but at least he is for law and order..Do you see law and order in your schools?

The UFT will support another Democratic candidate such as Bernie Sanders or Joe Biden. They seem not to be in step with what is going on with America. Economy is good, people have jobs, and the US once again has status in the world. The left hate Trump because he wants people to work for a living. I personally don't see anything wrong in this.

Too bad corey booker has some great credentials, stanford univ rhodes scholar but a complete jackass so throw all the education out the window

Thank you Chaz for the information you put out. I was trying to find answers about my TDA and the TRS couldn't give me the answers I needed. I got them from you! Then I read why you couldn't support Cory Booker. You are right on! Do your thing Chaz - you are a guy after my own heart!

WHO IS THE WINNER?

Wow! referring to the commenters..."trump is hated because he wants people to work?" Really? Booker is Black...thinly veiled remarks. Cowards, using dog whistles instead of just coming out front and saying what you mean. Cowards. I am black and I hate trump because he is an asshole, not because I work (like you) for a living by choice. Cowards!

6:36
Not sure why you think Trump is an asshole. If anything your pension (and taxes)is under greater uncertainty with any of the Democratic candidates including Cory Booker. This is not a "white/black" issue as you suggest but rather a green one. The amount of money that this country pays out to those who don't work far exceeds the money coming in from those who do. Perhaps we would do better getting people to work in our society instead if waiting around their Section 8 apartments waiting for their checks to come in.

This guy has my vote if he truly support the Palestinian cause. However, I doubt he will go again the the repressive regime of Israel and the Zionists in the US.

In my opinion, trump is an asshole period. If you disagree that is your perogative so dont try justifying him to me. Secondly, I am not giving you and that other commenter the benefit of the doubt that when you refer to people sitting home on Section 8 that you are not only speaking about Blacks. AND if you were being cowardly by not saying it, ponder this. The majority of people on welfare in this country are poor whites. Poverty and homelessness is not just a NYC ethnic issue. Blacks comprise only 16% of the USA's population and not all of us are poor. You should look at the issue of poverty on a national level (not just NYC) and see if people receiving public aid are all lazy good for nothings or are all minorities. Lastly, I dont give a damn about your opinion on politics. My vote is not for you to understand nor do I care what you think about Democrats. It's my opinion and decision you can take it or leave it. If you are a republican and trump supporter, your musings really dont mean a thing to me. I dont share Republican viewpoints except on a few things maybe...and I dont agree 100% with all democratic viewpoints either...but that is just me. One thing I am though is BLACK and I will always be pro Black and defend my race against those who want us to be marginalized in this country, like it or not.