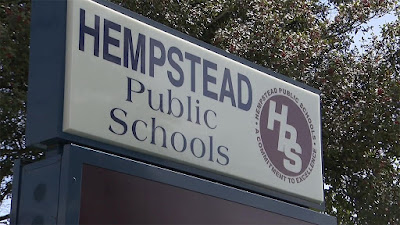 One of the poorest school districts on Long Island is Hempstead in Nassau County.  The heavily minority community is plagued with gangs, (MS-13) illegal immigrants, and a relatively high crime rate when compared to the County as a whole.  The result is that the schools have one of the lowest academic achievement results on Long Island.

The problem is that the charter schools require funding from the school district for tuition, food, and transportation costs for the 2,000 students enrolled.  This is 27% of the 7,300 students enrolled in the Hempstead public schools and that takes a significant chunk out of the school district budget.  This school year that is 44 million dollars and next year's projected budget it will rise to 55 million.

The result is that this school year Hempstead had to fire school staff, including teachers and next year the school district envisions more teacher layoffs as the charter schools expect an 11 million dollar increase in their budgets abd if the State does not issue a special grant for Hempstead, the school district will have to cut many programs.  Newsday has a nice article about Hempstead schools.

DISGUSTING. If charter schools are "public schools" like they claim, they should have to abide by the teachers contract in their individual district. However, as we all know, charters fire teachers at will, engage in borderline corporal punishment practices, and refuse to disclose how their money is spent.

The number of charter schools will continue to grow until NYC DOE and other school districts decide to provide and encourage a safe, orderly environment intended for education.

The corruption, ineptitude, and deterioration of the NYC DOE will continue until that $25,000,000,000+ swamp is drained or dried out.

Drained or dried out? Fat chance.

The UFT won't do anything, especially with Mulgrew at the helm. I don't think we'll ever have leadership willing to take on the excesses and ineptitude under the NYC DOE.

Great plan. Let's fire some teachers to save a budget. Maybe let's close all public schools at all? Why not? This will save even more budget money. I can already see the next generation writing the phrase “public kindergarten” in their resumes in the education section. Well done, keep it up.

So if there are less students, why should the number of teachers stay the same. In addition, these charter schools are predominately minority, which says a lot about the qaulity of the Hempstead schools.