The City Snookered The UFT On Parental Leave 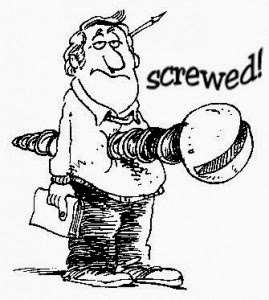 Despite UFT leadership's claim that they negotiated a great deal with the City on parental leave for its members, the truth is that the City get the better deal as the UFT was forced to self fund the parental leave cost by extending the contract  73 days which effectively meant a 0% raise for almost three months. In addition, the City made out in other ways.

Moreover, since the City does not directly pay for parental leave, it comes from the UFT welfare fund which is funded by the City.  Consequently, the City does not have to include the UFT member on parental leave on their payroll and therefore it does not need to be included in their budgeting to NYCERS, which saves the city money in the short-term.

I bet no one is going to retire 3-5 years after taking parental leave so I don’t think it will hurt anyone.

I stopped paying dues 15 years ago. The best decision I ever made. They don't deserve $62 per pay period.

Do not get me started! haha. So many people were celebrating this terrible leave. 17 years teaching and I have 95 days in CAR.

Disgusting loophole if two DOE teachers are married like in my case. We have to split the 6 weeks because the UFT considers us as "one." If thats the case why are we paying 3,000 a year we should be giving 1,500. I cannot even give CAR days to my wife 2 for 1.

After I gave my wife the 6 weeks, I basically had a bullshit 9-10 days of paternity leave! I even had to go to urgent care to fake a medical note so I can stay on payroll. Thanks so much UFT, AWESOME LOOPHOLES!

whats worse is I took the parental leave and missed the salary step increase and no one in UFT knew about this. even when I visited the UFT multiple times to ask for clarification regarding what to expect when taking the 6 weeks. ON TOP OF ALL these craps

Considering we have a lot of perks, Teaching has one of the worst paternity/maternity leaves in all the industries

Parental leave is important. At least one parent needs to bond with a young baby.

The deal the UFT got does seem to favor the city in that a teacher can go on leave, but other teachers are the one subsidizing it, more than the DOE.

When you are a new or young teacher make sure you bank as many sick days as possible. You're going to need them if you plan to have a child some day. Go to work sick if you have to and don't take the bs mental health days.

Blame this on Emily James for helping to push through this crap leave. She was in over her head, but spoke with such great authority that people fell for her BS. Every single person I know who has taken it (we had 10 last year) regrets it.

I retired this year and postponing the raise by 73 days hurt me by reducing my FAS.....sorry, I didn't vote for this and it's just not cool!!!! Another bad deal from the UFT.

Anonymous 11:32 AM Do you realize how minimally 1/3 of a 2% raise for two months will affect your FAS. You made it, you’re retired. Stop whining and enjoy it

@11:32 theres alot wrong with the uft and our contract but complaing about 1/6 of a 2% raise x 1.67% (if you have over 30 years)should not be one of them-- thats barely enough $ lost to buy a bagel and coffee in the morning. if thats really a financial hardship to lose- maybe u need to reconsider retiring.

1. Totally agree the UFT sold out on the parental leave and got teachers nothing but bullshit - way to go fuckin UFT

2. @anon2323 you are absolutely right this is a disgrace - in most companies a couple working for a company can have one parent take off (full pay) and then the second parent can take off (full pay) when the first one returns. Again UFT really fucked up on this one. Total bullshit.

@6:02 you could not have stopped paying dues for 15 years - go sell your stupidity somewhere else... if you really believe you did stop paying dues (when it was impossible) then you are really showing your ignorance & probably would have been u-rated and discontinued for being too dumb... idiot