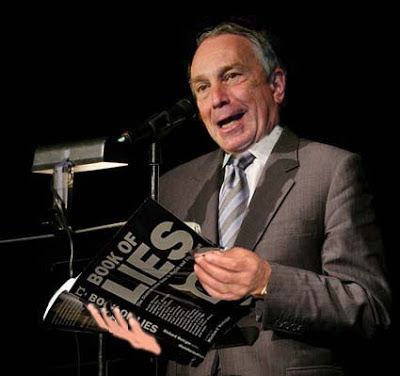 I read Chalkbeat's article on Mayor Michael Bloomberg's educational legacy and felt it did not adequately identify the negatives associated with his policies on the New York City public schools.

For example, Chalkbeat did not identify school based fair student funding that discriminated against senior teachers or his creation of the ATR pool that cost the DOE over 150 million dollars annually. In addition, Bloomberg's policies also resulted in the destruction of neighborhood schools by closing many of the large comprehensive high schools and allowing principals to artificially raise graduation rates by allowing failing students to take loads of "credit recovery" courses that had no academic value.  Let's not forget how he supported charter schools by giving rhem school space and funds while starving the public schools of resources.

Under Mayor Michael Bloomberg the racial/income academic achievement gap actually widened! and how he refused to give teachers a raise that he gave most everybody else as he igbored the City's collective bargaining policy.

The legacy of the Bloomberg education policy resulted in the DOE and classroom teachers treated each other as the enemy and his disrespect for public school teachers is legendary.
Posted by Chaz at 12:18 PM

Thanks for the atr pool midget mikey...i am fine just fine living and working in this pool and thanks for helping me advance my career as a hun it thousand dollar babi sitter.

Thanks for destroying the comprehensive high school!

Music, art, tec, electives, AP classes, school libraries, teacher cafe, all a thing of the past!

Admin who do not know the discipline they are observing! Admin who have very little teaching experience and no real credentials given admin title!

It makes no sense to me how when Bloomberg was mayor he was pro charter school but also in charge of the DOE. Isn't this obviously a conflict of interest? It never made sense to me that he sent the DOE schools into a downward spiral of lies, corruption, incompetence, inefficiency, and misery.

As president of the US, would he do the same to the US?

All those NY Post articles on corruption in the dOE and in the schools are Bloomberg's legacy. Everyone blames de Blasio and he bares a lot of responsibility for keeping Bloomie policies in place esp by appointing Farina who was Joel Klein's chief assistant for years. They created the gotcha mentality that has existed. Before Bloomberg there was a lot of corruption at the central and district levels but we never saw attacks on teachers.

If you support charter schools, you're admitting that the public schools in your city or country basically suck. Wouldn't you want to fix your public schools?

Bloomberg had no intention or desire to fix the DOE schools; it was quite the opposite.

to 7:19 am - Don't forget the ill advised appointment of the illustrious Cathy Black and before Bloomberg was that weasel Giuliani who kept trying to get control of TRS funds. You might remember that he wanted control of the Board of Education but the legislature, i.e. Shelly Silver, kept preventing it. It finally happened under Bloomberg who, by the way, is no longer Michael - he is now MIKE! To quote Charley Brown, "Good Grief!"

Happy Thanksgiving to all.

Eric....where are the annual turkey awards?

The idiot savant Justin Stark thought he was a winner this year.

You disappointed the failed NYCDOE administrator....

Those lawyers are having a ball going after senior teachers.