Mayor Bloomberg Hates Teachers Even When It Hurts The Children. 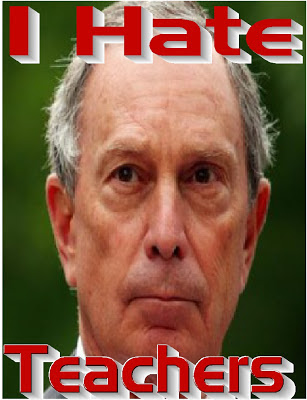 The latest attack on New York City teachers by Mayor Bloomberg has yet again cost the City a minimum of $250 million dollars and possibly more.  The expected budget shortfall will be felt by the schools who will probably not be able to hire teachers to fill vacancies and result in even larger class sizes, already the highest in the State. According to the union, already 1,000 of the 3,500 teachers hired this year have left the NYC schools and more can reasonably be expected to leave.Was the mayor's action an isolated act or is it something far more?  The answer is quite simple to me.  The Mayor wants to break the teacher's union and teacher "due process rights" and he will cost the City millions, maybe even billions of dollars to achieve his goal.  Lets see what the Mayor has done to attack NYC teachers and cost the City a billion dollars or more in the process.

The Absent Teacher Reserve: One of the many unfortunate byproducts of the terrible 2005 contract was the elimination of seniority rights, or bumping.  Even worse was the elimination of the requirement that principals were required to pick up any teacher who was excessed in their District if that teacher was certified in the subject area where the vacancy existed.  Sure, many principals were allowed to hide 50% of these vacancies and waited until there was no excessed teacher available in the District so that they can hire whom they pleased.  However, there was a risk in doing that by the Principal but still most excessed teachers obtained a position by the start of the next school year.  Once the bumping requirements were eliminated, the DOE found that they were paying approximately $150 million dollars annually since 2006 for teachers who have no classroom positions.

Fair Student Funding: The Bloomberg Administration imposed a new budget formula when it came to school staff that severely penalizes principals who wanted to hire the "best teachers" for their students. The "fair student funding" required that the actual salaries of teachers be part of the budget.  While they modified it somewhat by using the "average salary" of the teachers at a school rather than the actual salary.  However, to many principals it still cost them real dollars and in an era of tight and ever tightening budgets, the "fair student funding" is a disincentive for hiring experienced teachers.  Is it any wonder that the ATR list are full of senior teachers who make $80,000 or more?  Previously, schools would compete for these senior teachers because of their deep knowledge in curriculum and classroom management skills since the schools simply counted the amount of teachers the schools needs and a teacher was considered a unit, regardless of their salary.  The result was the schools would try to get the "best teachers" for their school since the teacher's salary was not counted against the school's budget. This change happened during the time of tight budgets and with most schools losing an average of 13.4% in funding that made hiring "good teachers" a luxury that most principals felt they could not afford even if hiring them would have been best for their students.

The Mayor's LIFO Bill.The Mayor's hatred for teachers, especially veteran teachers, was very evident in his submission of a "Last in, First out", (LIFO) bill for New York City teachers only.  It is rumored  that he spent nearly a million dollars of his own money to get the Republican-controlled State Senate to pass it.  The fact that the Mayor's LIFO bill would only affect NYC teachers speaks volumes of his hatred of our union and our profession.  Fortunately, it never came to a vote in the Democratic-controlled State Assembly and died in committee  How much money did the DOE use to mobilize support for the Mayor's Bill?  Millions of dollars I would guess.  This came at the time of ever shrinking school budgets and ever increasing class sizes in NYC schools.

Turnaround School Program: During the contentious teacher evaluation talks, Mayor Bloomberg had a temper tantrum when he didn't get his way on the "ineffective" teacher appeals process (he wanted all teachers rated "ineffective" fired not the 87% negotiated) and listed 33 schools (later reduced to 24) that were "restart" or "transformation" schools and required them to go through the more draconian "turnaround" process.  The  "turnaround" program allowed the Mayor to remove at least 50% of the existing school staff and if they were teachers, dump them into the ATR pool.  In the 18D process one new principal was advised by their CFN to bring in as much "new blood" (newbie teachers") as possible and in the school I interviewed in only the lead teachers and all non tenured teachers were selected.  Of course the Mayor's hatred for senior teachers blinded him to the contract violation and both an Arbitrator and judge ruled against the Mayor and it cost the DOE an addition $34 million dollars of lost funds.


Failure To Approve The Teacher Evaluation System:  Now, the Mayor demanded that the Teacher Evaluation System not have a "sunset provision", despite the fact the State agreed to one for all other New York State school districts and did so in the DOE/UFT draft proposal.  The reason for the Mayor's objection?  He claimed he cannot fire teachers if there is a "sunset provision".  Yes, firing teachers is the prime reason to have a teacher evaluation system not improving teacher quality, or what is best for the City's students.  The Mayor's hatred for teachers will cost the City another $250 million dollars of extra State funding and cause the DOE to lose control of hundreds of million dollars more that is channeled by the State from the federal government to the City.


While, there are many more examples of the Bloomberg Administration wasting or losing money such as a failure to obtain Medicaid reinburshment for schools ($100 million dollars), the Citytime scandel ($700 million dollars), and the bloated technology consultant contracts that is almost a billion dollars of the DOE's budget while the school wi-fi systems are either antiquated or non-existent. These are not anti-teacher and were not included in this post.  Moreover, if anybody doesn't think that the Mayor's attack on the school bus drivers is not related to his frustration against the teacher union that has stopped him from achieving his education goals?  I have a bridge in Brooklyn to sell you.


How does Mayor Bloomberg hate teachers?  Let me count the ways.

The lack of adequate resources, experienced teachers, and ever increasing class sizes just hurts the children and puts the students last when it comes to what the Mayor wants.

The total loss of funds to the New York City school system?  Probably over a billion dollars in the last five years.  Mr. Mayor I guess you really have a billion reasons to hate teachers don't you?

They won't even rid the schools of exploding PCB light fixtures:

Clearly they care nothing for children It's Bloomberg and Walcott First. Always.

Chaz, I've been away for a couple of days and am with the two small children. I'm a bit confused about this new February 15th deadline that King extended. Does it mean a new evaluation can still be hammered out between our Union and the Doe? Again, Im just a bit confused about it. Thanks!

My understanding this deadline is not about the 250 million. The Feb 15th deadline deals with federal money the State gives to school districts and Commissioner King has threatened the DOE by not letting them disperse the money but instead have the State do it.

Ahh okay - just had a sec to read the Times article about it - says the DOE must submit plans - "plans" being the operative word not "deal" by the 15th. Hoping I am correct on this. Amyone reading the comments section and knows more, please chime in.

Another mayor who hated and still hates teachers and their union is one Ed Koch. The former mayor has once again been admitted to a hospital. Bloomberg named a bridge after this old phoney. For teachers and children working in the schools I hope both of these autocratic hypocrites will soon be gone.

Chaz, hi!
Thanks for your posts. They are informative.
Question. Since the UFT didn't get an agreement on evals does this mean that, operationally, principals should cease and desist from forcing teachers to go to Danielson lunch and learns and forced peer observations?

Or can the eval deal still be implemented for this school year?

I can't understand why any teacher would be upset about this deadline passing without a deal. The $250 million, first of all, is a tiny percentage of the city's education budget. Second, and more important, I'm pretty sure that money would never have seen the inside of a classroom. It would more likely have been to pay for more staff development, development of more nonsense to make our lives even more difficult, etc. And finally, how could anyone here want to be subject to the new evaluation plan, which is totally rigged against teachers? We should be thrilled that the deadline passed without us being subject to it.

Good question. It would seem the Principal cannot use the Danielson framework or any other information from the proposed teacher evaluation system. However, in saying that, our union tells us to obey and grieve. Therefore, I would object to using my lunch for such planning but I would not be insubordinate. Your Chapter Leader should be filing a grievance to stop the practice.

Thanks, Chaz but Bloomberg doesn't hate all teachers. He loves teachers who don't complain about working through their lunch, who never say a peep when their contractual rights are violated and when they leave before reaching salary step 8A. Whether he likes or dislikes teachers means little in his world since he is only trying to have the DOE mimic his own corporate experience. In his world teachers who assert their rights or have the audacity to make a career out of teaching are inefficient, costly and pains in the ass. The fact that he playing games with the UFT shows just how ill he is.

You are right of cause. Bloomberg loves E4E, "newbie teachers" and those teachers who don't mind being abused by the Administration.

As for the rest of us, especially teachers that last long enough to get a pension and retiree health benefits. These teachers need to be rated "ineffective" and terminated by Bloomberg.

I can't fathom why the Mayor hates the teachers union. Did something happen to him as a student that brings this hatred out?