Bloomberg & Black Are Trying To Divide Teachers Based Upon Age & Experience In Their "Education On The Cheap" Policy. 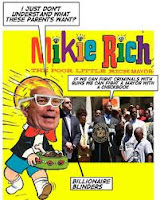 There is little doubt that the Mayor4Life, his Emperor, Michael Bloomberg and his puppet Chancellor, the unqualified Cathie Black, have made a full court press in trying to split the teachers by age and experience. Their cynical complaints that seniority in the form of "last in, first out" will harm the children is not only baseless but is just a blatant attempt to further their "education on the cheap" policy that would advance their goal of a replaceable teaching staff. By having such a teaching staff, few teachers would qualify for a pension or retiree health benefits. This would save the City large amount of money in pensions and the ever-increasing health benefits. The ex-Chancellor Joel Klein admitted as much when he was quoted by UFT President Michael Mulgrew in saying ‘I’m going to pit new teachers against older teachers and I’m going to do it by trying to make it look like we’re doing layoffs''.

Bloomberg stated that if he could eliminate seniority, it would be good for the children since he would need to layoff less teachers, keep the best, and eliminate the ATR pool. However, what he fails to say is who would determine who is an "effective teacher"? We all know the answer, it is the Principal. Therefore, a teacher's continued employment will primarily depend on how he or she gets along with Principal and not what the parents or students feel about the teacher. In the Bloomberg/Klein era parent complaints were ignored and students were used as a tool to advance their propaganda against school staff.

That brings us to the stooges at the Excellence4Education, who were formed by two "newbie" ex-teachers who are now independently paid by the Bill Gates foundation through the Al Sharpton/Joel Klein misnamed Education Equity Project. They think of themselves as a force or reform but what they are is a divisive force that plays the fool for the Bloomberg Administration. They want everything that Bloomberg wants, elimination of seniority ("last in, first out") , merit pay, a teacher evaluation system, and an ATR time limit. All of these positions are contrary to the union's position and is well-aligned with the Bloomberg Administration and the non-educators at Tweed. What about class size? How about the studies that show it takes a minimum of five years to be an "effective teacher" and eight years to plateau at their highest teaching level? What about inept and incompetent Administration. E4E is very quiet about these issues.

I am sure we have all noticed that the teacher evaluation process does not presently involve peer review and based upon the "double standard" the DOE uses between teacher and Administrator, you can guess that a teacher has just as much chance to prevail against a vindictive and insecure Principal out to get him or her then a falsely accused Soviet citizen had in the "Stalin Show Trial". I bet that whatever teacher input that is eventually allowed in the teacher evaluation process will simply be a "fig leaf" for the Principal to do what he or she wants.

"Children First"? Don't make me laugh, it is simply all about saving money, ageism, and a reduction in future benefits paid to retirees. Let's say it as it is "children last" in the Bloomberg/Black campaign to implement their "education on the cheap" policy.
Posted by Chaz at 1:26 PM

Wonder if Bloomberg, Klein and Black have to do much to divide senior and junior teachers. The seeds of resentment are always there, the current environment including unemployment rate, student loans, and other options, is such that the seeds are germinating with or without coaxing, Bloomberg does help heating things up to fit in his master plan of Children's last..

Fire all young teachers!!!! They are not as good a teachers with more experiance. The Union needs to protect the teachers with the most experiance and forget about those with as little as 5 years or less of experiance.

Let us look from a different angle . The more expensive your insurance policy is, usually the more and better coverage you will get. So the longer you have been as a member, the more union dues you paid into the organization, the more protection you are entitled to receive from it. Make any sense?
Bloomberg must undersand thispretty well in his subscription schemes.

Those who have paid more union dues should be protected. These kids have paid a few years of union dues and expect to be protected, which is unfair. Protect those with the most invested into the union.

I really don't understand why the union remains quiet on Bloomberg'a attack against senior teachers. Can anyone give me a good reason why the union is not fighting back?

Hey Chaz. Don't be an idiot. Don't blame the union on this. Blame Bloomberg and encourage both experienced and inexperienced teachers to fight against the layoffs no matter who gets affected because at the end of the day it will be the children who will suffer the most. Or, you can go back to sleep in the rubber room and say "why is the union not fighting for me." You had the opportunity to stop being a whiner...you failed. Let's fight against the cuts. Come and rally in Brooklyn Tech!

Hello,
I can see that you are interested in issues regarding education in our country. Please be aware that a national movement has been coalescing and has now come together.

Educators and parent groups all over the country are supporting our national grassroots movement to take back control of our schools. We are sponsoring a march in Washington, D.C. on July 30, and we have issued a national call to action. One of our many endorsements has come from Diane Ravitch. She and other important educators will be presenting in Washington at events surrounding the March.

How can you help? Please visit our website www.saveourschoolsmarch.org and please help us get out the word! This is such a politically crucial time for the PUBLIC schools! They are under attack from legislators, the media, and even our National and State Government . We’d love to have you blog about us and we’d love to have your blog link to our website. Together, we will speak with ONE VOICE. We WILL be heard.

I agree with anon: 9:31. Keep the teachers actually teaching. Either put teachers like Chaz back in the classroom or fire them. You are hurting the children.