The Emperor Mayor Wants To Bring Back Nepotism, Favoritism, And Patronage Into The Civil Service System. Fat Chance Bloomie! 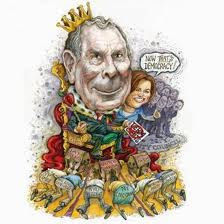 The self-proclaimed Emperor doesn't like the Civil Service System that was established in 1883 which was set up to eliminate favoritism, nepotism, and patronage when hiring, firing, and promoting government employees. The Mayor4Life selected a hand-picked group of friends and executives to revamp the Civil Service System to bring back the very abuses that was the reason for the Civil Service System in the first place. This elitist group was called the Workforce Reform Task Force and its mission was to reduce worker protections under the Civil Service system. Mayor Bloomberg did not see fit to include any union leaders in the group and made sure the unions were kept in the dark about the task force and did not know about the report until the New York Times brought attention to it. Predictably, the unions were very upset about not being involved in the process and have formed a united front to stop any of the Bloomberg proposals that require State approval to see the light of day.

One of the major reforms Mayor Bloomberg wants is to eliminate the "last in, first out" requirement for City teachers and changes to the Taylor Law making it easier for the City to use department seniority, rather than total seniority to determine layoffs. This would allow the City to eliminate whole departments rather than have bumping occur. Predictably the union leaders were very negative to the changes led by the Uniformed Firefighters Association President, Steve Cassidy who was disgusted with the secrecy of the task force and said had the union been included in the discussions, maybe common ground could have been found for the union to support some of the 23 recommendations. Instead the Mayor is trying to steamroll this past them and the unions will band together to fight any changes sent to Albany. Teacher union Pf resident Michael Mulgrew stated that "Emperor Mike wants complete control of everyone, in their jobs and their life. That's how I read the report".

The Emperor's disregard and disconnect with the people is becoming more and more evident. First, he buys a third term, next he selects an unqualified Chancellor, then poorly handles, the blizzard in December. Furthermore, he proposes changes in the Civil Service system without union input and finally, NYC is the only major school district in the Philadelphia to Boston corridor that opens schools when the secondary roads are unplowed and sidewalks are not cleared, putting many children in danger just to get some money from the State. If that is not "children last" I don't know what is.

Is it any wonder that the Mayor's approval ratings have dropped to 37%. However, what does he care what the little people think, he is the billionaire Emperor and he does as he pleases.
Posted by Chaz at 10:15 AM

Heard you on Blog talk last night. What you said makes so much sense. Too bad the powers that be won't listen. Hope things end up going your way.

And to think that Randi in actuality ENDORSED this pig, by NOT endorsing Thompson....nice work Randi...what the hell did we (or YOU) get for THAT MOVE...?

Chaz I also tuned into listen to your horror show. I truly hope you will be made whole again! Thanks for sharing what a shitty system we dedicated our lives to!

I missed your Blog Talk. Is a recording of it available?

I have a lot more to say and will work with South Bronx schools to talk aboput it in the futur4e.

Is there a recording of the blog talk out there? I would love to hear what Chaz had to say.