The Unqualified Chancellor, Cathie Black Shows Her True Colors By Concentrating On Budget Cuts And Not The Children In Her "Children Last" Program. 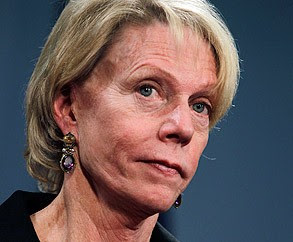 I hate to say I told you so but the unqualified Chancellor, Cathie Black has tipped her hand by stating that her top priority is the Bloomberg-imposed budget cuts and increasing already large class size to account for less teachers in the school system. She was very vague about how she was to handle budget cuts without hurting the schools but did say that increasing class size is not as important as keeping quality (cheap & inexperienced) teachers in the classroom. I wonder where she got that from? In other words eliminate "last in, first out" civil service requirements. Another reason she was vague was she really knows nothing about education or the New York City Public Schools. Remember, she went to private school and her children went to a boarding school with maybe 10-15 students per class.

Cathie Black started her school tour by going to a few carefully selected schools while staying clear of the struggling and failing schools, like Jamaica High School that would show her what the DOE has done to them by starving them or money and forcing them to take the students that were rejected from other schools. These are known as over the counter students. A more detailed history of what happened to Jamaica High School was written up by teacher Marc Epstein, Here. I see no real change in this school year with the unqualified Chancellor in charge as she is really a pre-kindergartner when it comes to her knowledge of the public schools. Therefore, look for the cuts to be controlled by Tweed and layoffs come from outside Tweed. That means the Regional Offices (CFN's) clerical positions, school aides, and support staff are in serious danger of losing their jobs. Do not look for significant cuts at Tweed or their pet programs that have proven to be just about worthless to student academic achievement. How does a bunch of British and Australian non-educators add to an American educational program? The millions spent on these worthless quality review and letter grade programs inspired by Tweed, should have resulted in the firing of these idiots who approved it. Instead they were promoted under Joel Klein.

The businesses have shown that it is not the knowledge of the industry that matters but the quality of the leader. A strong leader surrounds themselves with knowledgeable people, but they themselves do not necessarily have to be an expert in the area.

Open your eyes are realize the hired a leader NOT an educator and that is what the education system needs, A LEADER!

If you understand education, bringing in an outsider with no experience is very dangerous. Children are nor widgets and teachers are not cogs. To assume a non-educator understands what goes on in a classroom is just plain ignorant.

Anon @ 539: You're obviously not big on critical thought.

Chaz: You say the DOE starves "failing" schools like Jamaica of funds. I've heard this over and over and over since I've been in NYC but can't find any evidence or numbers of fiscal allocation. Can you point me in the right direction?

Look at the teacher to student ratio at Jamaica and compare it to the other schools in the building or just walk through the building as State Senator Tony Avella did yesterday.

Chaz: I completely disagree with you. You do not have to be a educator to understand education.

I think one of the problems is that educators are running the education system. Educators have a hard time thinking out of the box and thinking about new ways to educate because they have been taught and trained to educate in one type of fashion. Also because educators do not want to give up the ways of the union; seniority, pension plans, other benefits, etc.

An outsider doesn't have these type of ideas drilled into their head, so at times they can bring fresh new ideas that a teacher may not.

From a quality and expense stand point the education system in America is broke. Staying with status quo does not work anymore. The entire system needs to be reevaluated. Of course educators must play a key role in the transformation of the education system but an educator does not necessarily have to be the leader.

I guess we can disagree and still be civil. However, I must remind you that Cathie Black is highly unqualified and her statement that class size is not important is just shows her ignorance of the classroom.

Is there anyone who does not know Klein had virtually no educational experience and failed at his job? The non-educator has been succeeded by another non-educator. Perhaps it is time to change the status quo and bring in an educator.

I want John Liu to perform a rigorous inquiry and analysis of school safety incidents. I bet that these are going to worsen in the midst of these cuts.
Fewer guidance counselors, fewer deans, classes that are crowded beyond belief (you know the sight: classrooms out of seats, with kids leaning against the radiators) spell a formula for trouble big-time.

As to the Reflective Educator's doubting of starving schools of the likes of Jamaica HS, how long have you been in NYC schools? -or are you in some pampered school with a laptop ratio approaching the number of students? with class sizes around 22 at the secondary level? You are quite out of touch.

NY_I: Asking for sources of information doesn't mean you're doubting anything. I work in a school with a 100% ELL population and 100% free and reduced lunch population in the South Bronx. We have virtually no technology and few textbooks.

I'm out of touch? You're an idiot. Show me where to find the info.