Its Good To Be The Chancellor. If Cathie Black Was A Teacher, The DOE Would Bring Disciplinary Action And Even Termination Charges. 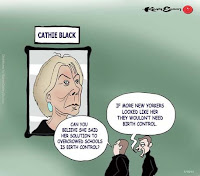 Our unqualified Chancellor, Cathie Black put her foot in her mouth by claiming that the way to handle classroom overcrowding was for parents to practice birth control. Not only was this an insensitive remark but has racial implications as many poor minority parents are told to limit the amount of children unless they can afford them. She further shoved her foot deeper into her mouth when she told the same audience that when it came to budget cuts she was faced with a "Sophie's Choice". I guess the loser in the Education budget cuts are to be exterminated in a Nazi death camp. What a gruesome thought. She then compounded her stupid remarks with keeping schools open and telling parents, students, and staff to show up while canceling her trip to a Staten Island school because of the ice and snow. Just unbelievable!

Remember, the unqualified Chancellor, Cathie Black never went to public school, she went to a private school with low class sizes and high tuition while her children were sent to boarding school with even lower class sizes and astronomical tuition that only the elite can afford. Furthermore, Cathie Black has no educational experience and doesn't even have a master's degree, a necessary requirement according to New York State regulations. However, her puppeteer, Mayor Bloomberg managed to obtain a waiver from the State which was unfortunate for the New York City Schools. You would think the Mayor4Life would be embarrassed by the unqualified Chancellor's actions. However, he defended Cathie Black by saying that we all say things that are taken out of context or regret how it came out. Even the New York Post Wrote an Editorial calling on Cathie Black "to put a lid on it, Cathie". Further, the Post comment section which is usually supportive, universally panned her idiotic statements.

Now if Cathie Black was a teacher that teacher would have been brought up on charges for making a raciest statement under the Chancellor's Regulation A-421 for Verbal Abuse and would be subject to the DOE's investigative arms of OEO and/or OSI. Moreover, the use of the "Sophie's Choice" comparison to budget cuts would lead to charges of Anti-semitism and an insensitivity to how Jewish students feel about what happened to their people during the Nazi period. I suspect the Mayor4Life would have demanded that the teacher be removed from the classroom and be fired. However, Cathie Black is the Chancellor and Mayor Bloomberg hand-picked her. Therefore, instead of firing her, The Mayor defends her. Too bad he doesn't use the same standard for all those teachers who had to go through their disciplinary and termination hearings for allegedly doing a lot less.

I guess it is good to be Chancellor since you are not accountable for your actions, no matter how stupid they are.
Posted by Chaz at 3:35 PM

Black is an obvious drunk. Look at her collapsing face. She shouldn't even clean the school toilets with her tongue.

Just what we needed, another unqualified, mealy mouthed asshole to further privatize the chaos that is NYC DOE.

The little dictator will soon realize what a shitty choice he made in this rich upper eastside socialite.

After the bitch has laid off teachers, he will kick her drunken sagging face to the curb where she belongs.

She is clearly impaired and judging by her numerous gaffes, couldn't possibly be a "good manager" She is here to fire teachers. That is the long and short of it.

So grab your ankles, here comes the drill.

...it's always Happy Hour in Southampton...

In Bloomberg's world the ultra-rich and friends can do no wrong. Only the common people do.

As always, you hit the nail on the head. How can teachers respect a "leader" that is not qualified to lead by example? As you stated, a NYCDOE teacher would face definitive charges for racial comments and forced to pay for a class for sensitivity training. Can teachers facing such charges use "Uncle Mike's" excuse for Cathie??? This phony will fall on her face and land on "Uncle Mike" as he is already on his way down.

Great post Chaz! So damn true about the double standards. As always " i'd laugh if it weren't prohibited!" Waiting for Godot.