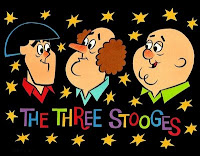 I have read the proposals by Educators4Excellence (E4E) on who should get laid off and believe that these fifth columnists are not just clueless on how the NYC school system works but are aiding and abetting Emperor Bloomberg in his attempt to destroy the teacher's union. The proposals are almost the same as the Mayor4Life's proposal except they added absences as a factor. Of course just like the Emperor and his vassal Chancellor Cathie Black, they do not explain how to come up a fair and equitable teacher evaluation procedure, except to ask that Principals document why a teacher should be laid off. The E4E are simply stooges for the Mayor and his ed deformer friends who really want a replaceable, inexpensive, and unvested teaching staff in their "education on the cheap" policies. With top stooge and Bloomberg jester, Jonathan (Moe) Bing carrying the ball to Albany to ask for repeal of the seniority-based layoffs for teachers.

For people who don't understand about E4E, this group was formed by two "newbie" teachers who promptly quit teaching full time when the ed deformers funded their organization and gave them a salary. Sydney (Curly) Morris and Evan (Larry) Stone receives funding from the Gates Foundation and Joel Klein's Education Reform group. As for Principals empowered to do the right thing. Here are just three cases why seniority-based layoffs is the only way to go.

Finally, JD2718 wrote an article that he took from a Philadelphia blog that applies here and is why seniority-based layoffs cannot be changed under any circumstances.

Eliminating seniority-based layoffs is just bringing back the "bad old days" of Tammany Hall where, patronage, favoritism, cronyism, and intimidation would determine who would get laid off. Its bad enough that Bloomberg acts like "Boss Tweed" does this City really want to back to the 1800's? I hope not.

Chaz: I'm grateful that after working all day with (who do you work with? teenagers?) kids at school, that you have the energy to sit down and write your insights. You are very likely correct - A$E are corporate whores. The fact that they run around saying that if seniority is changed then they themselves will also be hurt leads me to suspect that at least some of them are being propped up by the Gates Foundation with the promise that if they can destroy public education from the inside out their future in the oligarchy is assured. How freakin' sad. Not for them, I have no sympathy or compassion for them. Sad for the teachers they seek to destroy and the generations of schoolchildren who will be destroyed by extension in their weak.

All of you are so anti-lifo because you have numerous years of experience and are in no danger of being laid off.

This is not about what is fair or what is right for the children. This is about everyone trying to save their jobs.

Chaz, Why are you no longer teaching in a classroom?

I believe I explained myself fully on this. To let a Principal decide the fate of a tenured teacher is open to abuse do to ageism, salary, and control that is why LIFO needs to be retained.

What I find so ironic about E4E, and wrote a lot more about on my blog, is that all of the proposals on their website align perfectly with the corporate reform agenda, except one: they want a higher starting salaries for teachers. The discrepancy only goes to show how confused they are about their position in this mess and how little the understand the movement they've become the newest shills for.

It is easy to bash E4E and those trying to make changes when your job is safe. You can claim ageism or anything else all you want but at the end of the day you still have your job.

The E4E founders believe in their cause enough to quit their jobs and take up the cause full time (no it is not just for the moderate salary they have been afforded). Why don't you quit your job and take up your beliefs full time? Answer: you don’t believe in the cause, you believe in making sure you have a job next year.

The defense of the E4e is commendable. However, lime the Mayor they didn't explain "merit". That is the weakness. Since allowing principals to make the decision opens up the process to ageism, cronyism, favoritism, and money considerations.

As for E4e? They are bought and paid for by Gates and Klein and if they really want to make a difference they would not have abandoned the classroom.

I do not disagree that "ageism, cronyism, favoritism, and money considerations" and many other none fair factors would come into play. Please note that all of these also come into play when layoffs occur in private industry also. My point is that there are many posts talking about how they agree to LIFO because it is the only fair way. It is NOT fair, a fair system would be one that keeps the best teachers. Today's system is not designed to allow for this but it needs to changed to allow for it in the future. Keeping the best quality teachers is the fairest policy.

The reason these people including yourself are proLIFO is because it protects your job. If you were a second or third year teacher you would also be fighting against LIFO.

Bloomberg just wants Principals to make the decision and that is not fair since money considerations come into account.

You and E4E may think LIFO is not fair but the alternative is very unfair.