The Emperor, Mayor4Life, Michael Bloomberg Goes For The Jugular When It Comes To Teachers Rights. How Will The Union Respond To This Attack? 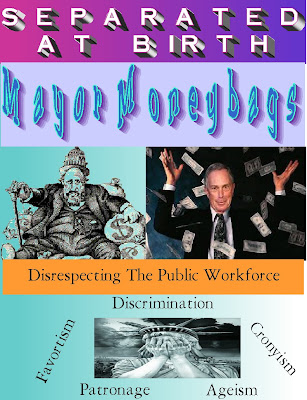 His Emperor, Mayor4Life Michael Bloomberg has started his Legislative campaign to get rid of senior teachers by having two hapless and clueless politicians propose an alternative to "Last in, First out". This is Bloomberg's first important salvo in dismantling the Civil Service laws and to destroy the teachers' union. Gotham Schools reported today that Bloomberg was able to put forth his layoff plan for teachers through an East End Republican, Joseph Flanagan in the Senate and of course his Court Jester, Democrat Jonathan Bing in the Assembly. Ana Phillips of Gotham News report the entire proposal which in effect gets rid of any teacher who received a "U" rating in the last five years as well as any teacher that was subject to disciplinary action that resulted in fines or suspensions Finally, the Principal is the sole determiner of who gets layoff. In other words, the entire proposal is based upon getting rid of teachers that administrators don't like. This proposal not only goes after a teacher's livelihood but goes after the jugular vein of the teachers' union.

While this outrageous and dangerous anti-union proposal will probably die in the State Assembly, just the idea that the Sate Legislature, especially the Senate may actually pass this abomination is scary. What is our union doing about this attack not only on its members but the Civil Service protections that has been a trademark of this State? I hope that UFT President Michael Mulgrew is not only telling the politicians what the consequences are for supporting this union-busting and teacher bashing Legislation but getting support of all the unions in combating Bloomberg's attack on public workers.

The full text of the City initiated attack on senior teachers can be found Here.

What is left unsaid about the proposal is that Bloomberg can get rid of high salaried senior teachers and keep cheaper teachers knowing full well that over 50% of these teachers will be gone from the New York City School System within five years. Moreover, if the teachers come from "Teach For America" an astonishing 80% leave the classroom within three years. The piece exposes that no matter how smart and enthusiastic these teachers are, they are gone from the classroom all too soon without acquiring the classroom management and social skills that could make them a "good teacher"The article by Stephen Lazar is a must read if you are to understand why retention of teachers is more important then having a large turnover of "newbie teachers".

Any right thinking person can never support this anti-teacher Legislation that Bloomberg and his flunkies have proposed and I am waiting for Michael Mulgrew to show me that he is the 800 pound gorilla he claims he is.

Chaz - you are, of course, on point with your posts, which is why I read them. But when you're bleary-eyed and tired and writing at the same time, be careful of your word errors - unless you're deliberately making a joke, I think you meant "jugular," not "juggler." Otherwise, keep up the fine work.

Thanks. I changed it.

This is the last part of the final solution by Bloomberg.

Open your eyes people. Look at what is going on to public employee unions. This is just a small element. The UFT is going to have to compromise here. They may get to mesh with the order of layoffs, and maybe seniority can become a 50% factor, but if you take a look at the Bill, they also get to negotiate a process for layoffs.
Do you really believe Unity cares a darn about former and present 3020-a inmates. This will be another way to save money on discipline.
So people like Chaz are going to be the first to go because of the finding of guilt. Bye Bye.

If you think your nightmare is over and you are free at last, "not so fast" Bloomie said. Your 4 1/2 ordeal is nothing but a tenderizing process, next will be the sizzling hot grill for anyone who went through the purgatory .

Having said that, and having known for years that UFT leadership complicit and acted like Vichy govt for last 10 years, it is absolutely certain to me that the current UFT, faulty as it may be, is all we got between Bloomberg and our pensions, and this time UFT leadership will do wahtever it takes to fight for our, more importantly their pensions. The members and the leadership are together in the same boat this time around.

It is equately clear to me that the NYC fiscal and budgetary situation will only get worse for years to come before it gets better and the rich definitely feels that they are not getting paid enough and the middle class is grossly overpaid for their worth. There is lot more blood letting to make and to come.

Just look out, after Bloomberg is done with this round of wage reduction by laying off senior teachers and workload increase on newer ones who will slave away in the crowded classes till exhaustion, the bull eye will be the CURRENT and future pension payout, which is the only oasis in the desert of the red. That is what is being done in the private sector everyday.

And this is capitalism out of control, it has to have growth and expansion to sustain itself and its ever increasing supply lines. The top wants to climb higher and refuses to loose a penny before all our chips are taken away first.

This is the first time in my teaching career of 25 years I say "Support UFT, support Mulgrew, and Divided we fall very quickly".

Randi Weingarten's comments in todays nY Times is the union response. There will be no fight only the slight of hand attack by the UFT to attack the millionaires tax, no real militancy against the obvious cave in by the AFT, NYSUT and the UFT.

Little buck toothed, "I worked in the trenches for 7 years" Randi did all right for herself from all this union business, eh? The house in Bridghampton, the glitzy newscaster girlfriend, the jet rides on Bloomberg's and others private jets...whooda thunk this lifestyle extracted from all these grimey, working class schlubs?