Even Governor Andrew Cuomo Wants To Know Why Is The Emperor Michael Bloomberg Not Looking To Cut Costs At The Central Administration In The DOE? 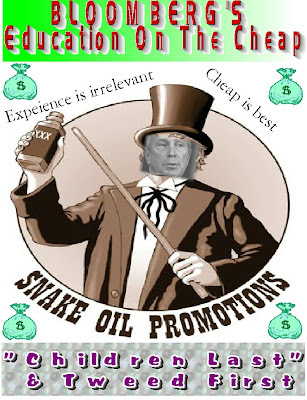 The Governor has decided to strike back on the continued complaining by school districts who use the threat of teacher layoffs (hear that Bloomie?) as a weapon to increase the State education budget. He was quoted as saying

"It's a threat; it's a game," Cuomo said at a news conference. "They want to oppose the cuts politically so they say, 'I'm going to hurt your child. Your child won't get an education.'

"This is not about a teacher in a classroom," Cuomo continued. "This is about less bureaucracy."

Even the New York Times has questioned the DOE's creative accountability on how many teachers will leave the system at year's end. The DOE estimates only 1,500 teachers leaving the system while the last two years nearly 5,000 teachers left. Furthermore, the DOE admits that they do not take into account teachers who leave before June 1, 2011 and as the rubber rooms emptied quite a few teachers resigned in February. Why did the DOE short the teacher attrition rate by 1,000? It is very obvious that Tweed wants to fire the teachers who the DOE considers "deadwood". Teachers who survived the Tweed inspired inquisition, highly salaried teachers, and teachers who ran afoul of a vindictive and insecure Principal. By shorting the attrition rate they can sneak in an additional thousand senior teachers for "firings".

Astoundingly, if one looks at the latest IBO It appears in the latest budget the DOE expects to increase the Central Administration by 10% and reduce the direct funding to schools significantly. Maybe somebody should show this to the Governor's Office Moreover, the NYC DOE has increased their headcount by 16,360 employees since Bloomberg became Mayor, or is that Emperor? Only 1,000 of them were teachers., Why has he not proposed any cuts there? How about the obscenely bloated computer services that Juan Gonzalez reported on in today's Daily News? Why? Instead they threaten to reduce the teaching staff by over 6,000. It doesn't take a rocket scientist to figure this out. The answer is he is scapegoating teachers and disrespecting the profession in trying to peruse his "education on the cheap" policy. It is just unbelievable that the mass Media does not ask the questions they need to. Instead they swallow the Bloomberg lies "hook line and sinker". Luckily Governor Andrew Cuomo sees it for what it is, a political fraud.

Well said. I'm still not persuaded about Cuomo in the long run, but I'd be very happy to be proven wrong.

Cuomo is a chip of the old block and that is a good thing for New York. He will compromise and lead a reform agenda with the collaboration of all the constituents having a say at the table. Mario Cuomo was a master at politics and knows the meaning and benefits of the word compromise. Andrew Cuomo will lead in a similar manner as evidence, the way he is going about the last in first out issue being raised daily in the media. He has not given in to the political wind of the moment. A very smart decision which will lead Cuomo to reform pledges that he has based his platform on. He will receive practical reform initiatives with the help of labor as all involved understand the economics realities the state is facing.

Bloomberg will cut teachers! At this point he will do it just because of his ego.

Bloomberg doesn't care what Cumo says, the Union says, Chaz says, or anyone else says. Cumo is making a mistake by calling Bloomberg's bluff. Bloomberg has an ego the size of NYC and will layoff teachers only so he can say 'I told you I would'

Well then...he'll be laying off HIS teachers-the newbies and newly hired.It'll kill him to do that, and would be an admission of losing to his monstrous sized ego. THEREFORE, his ego won't permit him to layoff his pets. Therefore ,Cuomo is correct in calling his bluff. Bloomberg won't reduce his main gains.

If Bloomberg wants to layoff in spite...LET HIM...

"If Bloomberg wants to layoff in spite...LET HIM..."; you obviously are not a newbie.

He will sacrifice the younger teachers just to make a point. If he doesn't lay them off this year he is going to face the same problem next year. If he lays off all the young teachers this year he will get the public on his side and will have a stronger argument for getting rid of LIFO. If he doesn't lay anyone off everyone will know he was bluffing and next year when he claims layoffs again he will be ignored.

Last anon I disagree, by next year there will be in place a new system that will deal with licensing/tenure/layoffs and firings. It will be the plan that the regents will propose with input from the unions nysut/uft and the Silver led democrats. Therefore, Bloomberg will have to follow the new law for layoffs which I suspect will still cause the great majority of teachers to be laid off by seniority. I only hope that those writing this new law will grant Bloomberg the equal amount of involvement as he allows the communities in New York city to have ZERO involvement!!!!!