"Bully Principal" Richard Bost, Another Principal Acting Badly And The Unaccountable DOE Continues To Protect Him. 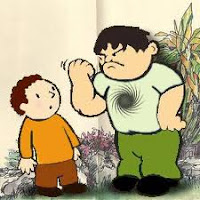 The UFT newspaper, the New York Teacher, wrote a very informative article about another "bad Principal" who has been accused of sexually harassing female teachers and possibly worse, as well as allegedly grouped a school secretary. In addition, there are persistent allegations that he has a forbidden sexual relationship with two subordinate teachers. Principal Richard Bost of the Fordham Leadership Academy, a "poorly rated school" has been accused of being a "bully" by the UFT newspaper and the entire article needs to be read to realize the extent of Richard Bost's misconduct over the years. Yes, Principal Richard Bost is a graduate of the infamous "Principal Leadership Academy" but I am sure you all knew this. Just another shinning example of a "Leadership Academy Principal". I previously wrote about these bullying principals and how Tweed actually encourages this bad behavior by principals Here. The 2010-2011 Quality Review has downgraded the school as "undeveloped"

Principal Richard Bost came on the media radar back in 2009 when an investigation substantiated that the Principal "grouped his payroll secretary and repeatedly made inappropriate comments on her cleavage and her clothes". The Superintendent, after reading the investigator's report of sexual harassment and molestation, tried to fire the Principal, only to be overruled by then Chancellor Joel Klein and has been protected by Tweed ever since. The most telling account was by the now-retired UFT Bronx HS Representative who reported her conversations with the Bronx Superintendent, Elena Papalberios, about Principal Richard Bost in the blog JD2718 and is a must read.

On September 16, 2010 parents, students and teachers picketed the school and Richard Bost on his failed leadership and was reported by the JD2718 blog. Here are some of the issues they were picketing about.

Now it seems that the DOE Office of Legal Services is too embarrassed to call in the Principal to testify against a teacher in his 3020-a hearing. I guess they are worried that all his alleged misdeeds and misconduct will be brought up and hurt the DOE's case against the teacher and it would certainly do just that.
Posted by Chaz at 7:33 PM

What we need is a series by the media on "bad principals" and make the DOE accountable for their lack of action against them.

The fact that Klein intervened and allowed the principal to remain with him having to go to sensitivity training indicates the MO for Bloomberg and Klein. Any princiapl placed by their leadership academy is above the rules or law just as Bloomberg is allowed an illegal third term.

And he's gone. It's a sorry story that it took years - predators should be away from children and should not have subordinates - immediately.

The New York Teacher article in May was fantastic, and the chapter was stubborn in not giving up the fight, even when it did not seem like they had a ton of support.

But a victory it is.

Bost was reported to OSI and OEO several times over the last two years, but most of these allegations were never followed up on by those agencies. It was not the tireless efforts of the UFT that finally got the job done, they failed us too. It was thepersistance of the Fordham Leadership staff that eventually got the job done, by encouraging parents to pursue their complaints. The lesson learned is that the DOE does not care about teachers, but they are afriad of parents. Other schools should take note.