Mayor Bloomberg Has Privately Given Up On Laying Off Teachers And Will Ask For Municipal Union Help In His Final Budget. 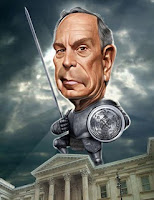 While it is not official, it is now highly likely that Mayor Bloomberg's attempt to destroy the Teachers' Union has backfired and no teacher layoff's are anticipated. While the details need to be worked out, it is a major victory for the children and a significant defeat for the Mayor.

The Bloomberg Administration is now working with the City Council and the Municipal Unions to rescind the planned teacher layoffs and possibly keep open the firehouses. With the Mayor's approval rating dropping and his allies abandoning him, it was inevitable that the Mayor cut a deal that will avert teacher layoffs as predicted here previously. It is now obvious that once the Mayor's attack on "last in, first out" (LIFO) failed, he had no intention of laying off the "newbie teachers" who are cheap and not vested. The problem was that the Mayor's arrogance and attack on the teachers' union gave him few, if any, real bargaining chips to negotiate with. The question was how to find a "face saving solution" to the problem he created in the first place. It now appears that such a solution will come from the Municipal Unions or so it seems.

Let's see how this finally ends but in any case the Mayor has suffered a major defeat and look for the Mayor to become increasingly irrelevant as the days tick by and nobody (except his poodle, Chancellor Dennis Walcott and his cronies at Tweed) will be jumping to the "lame duck" Mayor's beck and call.
Posted by Chaz at 5:15 PM

Right on all counts as many felt this was just bullying all along with no way he would get rid of the new small schools that he believes will be his lasting legacy to education. Guess what? They are as fraudulent as the rest of his education programs.

Legacy? You must be kidding. Mafioso is more like it.

The man is as delusional, as he is arrogant. He has zero credibility. He can lie to himself till the end of time, but nobody believes him. There is no saving face for him; he's nothing but a pathetic bully. I don't think any of the unions should concede anything. To negotiate with a madman, is an act of futility. It's time he ate some humble pie.

You know our union will still be looking for a way to grasp defeat from the jaws of victory and make a concession where none is needed - case in point the proposed raid on the health insurance fund.

I'd bet he's had his eye on this fund from the start and was looking for a way to raid it.

However, I am relieved to hear that layoffs are close to being off the table. It was going to be crowded with the 5 of us living in the minivan.

Bloomberg is just an arrogant bully who overplayed his hand and destroyed his legacy in education. It was his stop LIFO bill

He demonstrated that it was never about the children it was about him. Or as Chaz says "children last".

I don't believe that Bloomberg had this in mind. It was when his LIFO bill died did he find himself with a real problem.

There's still a budget surplus; why does anything having to do with health benefits have to be "raided" for any purpose, including saving teachers from layoffs or fire houses from closing? The union has agreed to too many concessions in recent years without our say; it's time for this bully of a mayor to concede something.

I don't think it is over with yet. For most mayors I would agree but Bloomberg is insane and has an ego bigger than NYC. I wouldn't be suprised if he has layoffs just to prove that he will.

Chaz, any ideas on the future for ATRs?

My best guess is that many of the ATRs will find vacancies in schools where attrition has created such vacancies and the DOE will not allow principals to hire "newbie teachers". However, the union must make sure the vacancies are filled.