Finally, The Daily News Wrote An Article On The Tweed Bloat At The Expense Of The Classroom. Will The Other Newspapers Follow Suit? 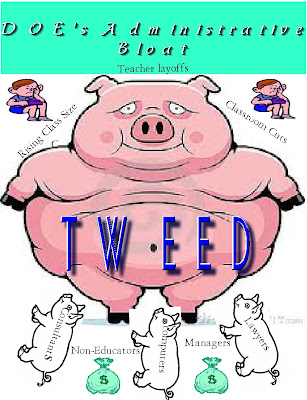 Over the last three months I felt like I was one of the very few blogging voices complaining about how the New York City Department Of Education's bloated Central Bureaucracy was given a pass as the mass media seemed to ignore the hypocrisy of increasing the Tweed budget while threatening to layoff 4,100 teachers. Admittedly, the New York Post editorial did mention the Tweed bloat in passing but didn't really go into detail. My posts about Tweed's bloated bureaucracy can be found here, here, here and here. In fact, you can go back years and see that the Tweed Administrative bloat has been an issue and the media seemed to generally ignore it. The Tweed Administrative bloat posts can be found here, and here.

Sure the NYC public school parents blog and the union brought up Tweed's Administrative bloat time and again and yes, some in the City Council are actually questioning the Bloomberg Administration on their funding priorities. However, the newspapers seemed to be deaf, dumb, and blind when it came to the DOE's budget for the Central Bureaucracy. Today the New York Daily News finally questioned why the Tweed budget is increasing 7%, or an additional $20 million at their headquarters? The article also pointed out that the Children First networks and Clusters, where some employees have little or no work to do, are getting an extra $3 million dollars. Just unbelievable!

The best quote about the outrageous increases in Tweed at the expense of the schools they are supposed to serve was by Councilwoman Gale Brewer who said the following.

"There's nobody who's a parent who feels there should be an increase at Tweed and cuts to the schools."

All this as Mayor Bloomberg and his poodle, Chancellor Dennis Walcott, keeps insisting in getting rid of 6,100 teachers and hurt the children with rising class sizes. This is just another shinning example of the Bloomberg Administration and the DOE who could care little of the parents, students, and school personnel needs when it comes to their wants. It is still "Tweed first, and children last...Always."
Posted by Chaz at 3:50 PM

Chaz, thank you for this very important post on this shamefully neglected issue. There should be a Pulitzer for blogs.