Mayor Bloomberg Raises The "White Flag" As He Surrenders On Teacher Layoffs Once He Failed To Eliminate " Last In, First Out" (LIFO) 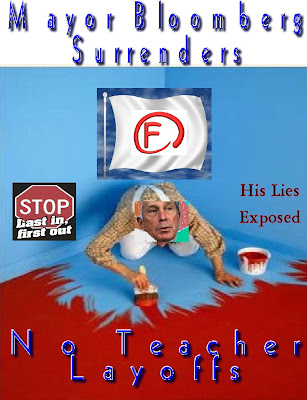 Last night the Bloomberg Administration formally surrendered "with hat in hand" they came to the UFT headquarters at 52 Broadway and asked for whatever face-saving concessions the union could offer to rescind the proposed teacher layoffs. Our union gave up sabbaticals for the 2012-13 school year for a savings of $17 million dollars and will allow ATRs to become day to day subs for a savings of $43 million dollars. The total UFT concessions are $60 million dollars, a far less figure than the $376 million dollars he Bloomberg Administration insisted on to stop the 4,100 teacher layoffs. Of course as predicted by many of us, once Bloomberg lost on the seniority-based layoff issue known as "last in, first out" (LIFO), there were going to be no teacher layoffs. Bloomberg would never allow his small schools who are staffed by cheap, "newbie" and untenured teachers to be stripped of their staff. His ploy was to get rid of ATRs and highly-paid senior teachers by any means possible and since that failed, it was only a question of how the Mayor would wiggle out of his teacher layoff pledge.

Now that the entire City, including, the news media has seen that once again the Mayor did not follow through with his threats and that the teacher layoffs were only a ploy to get rid of expensive senior teachers, his lack of credibility is obvious to all. More importantly, the Mayor magically found another $170 million dollars of tax revenues. My my, like that money wasn't available all along! Furthermore, there are deeper undefined cuts out of the DOE central bureaucracy. However, the Bloomberg and Tweed technology budget appears to be unaffected from these cuts. Finally, the Bloomberg Administration will let the DOE send out school budgets on Monday to principals that appeared to have been held hostage by the budget standoff. Has Bloomberg lost creditability? You bet he has, even his closest allies see how transparent his threats to layoff teachers was and this episode will add to his woes as his popularity with the people of the City is at an all time low and probably going lower.

The real question is what did the union really give up? First, the teacher sabbatical concession for the 2012-13 school year was a very minor concession and easily given up for no layoffs. The other concession, the use of ATRs for day to day subs is more complicated. Presently, many ATRs were used as "free teachers" who fill vacant teaching positions and having full classroom duties without the schools picking up their salary. According to the agreed upon concession, ATRs will no longer be given teaching programs, unless the school picks up the ATR's salary and appoints them to the vacancy. If that is true, then this "concession" would actually pressure the principals to either hire the ATR for the vacancy or be stuck with a revolving door of weekly ATRs which would result in little student learning and parent complaints, not a healthy situation for all involved.

There are rumors that the Mayor's poodle, the Chancellor, Dennis Walcott, will instruct Tweed to make sure that, with the exception of Special Education" , that all vacancies be filled by the existing ATR pool (since they cannot get rid of them) to ensure the most efficient use of existing resources as those schools who try to hide their vacancies will be under increasing scrutiny to explain why as the DOE tries to save money. For example my previous post is a case in point It will be interesting to see if the DOE reallky does go after these principals that hide vacancies actually happens. This ATR concession can go either way, only time will tell.
Posted by Chaz at 11:28 AM

Do you think the DA should vote to pass this, or not?

I really think that the implications to the ATRs must be explained fully by the UFT leadership before we can accurately evaluate it.

Are most ATRs used as a day sub or a long term sub? How much efficiency can DoE squeeze out of them by shifting them around schools? another scam! the only thing DoE is capable of.

Does anyone know who should I report this to? At the school where I work there are several vacancies. None of the vacancies have been posted in the open market portal. The principal is only interviewing very young teaching fellows. I am upset because of the ATR situation come september. Any suggestions.

First, contact the District representative and let him/her of thed hiding of vacancies. The DR will probably contact both the Principal and the District Superintendent and resolve the issue, Or they should.

However, if it is Special Education or a new school that is adding a class, the Principal can interview and appoint newbie teachers.

And good answer to NYC Educator... but I assume, after the explanations/clarifications, all agree that the DA has to pass this.

will atr's continue to get ull salaries and benefits?

I hope not. They don't deserve it.

The ATRs will get full benefits, like any other teacher. The only thing that might change is that some ATRs will be day to day subs in their district at a school for a week.

However, the agreement may actually help ATRs who are looking for positions since it would seem the DOE will not allow principals to hide vacancies orhire "newbie teachers" as long-term subs.

I am interested what Mulgrew will say about this at the DA.

Shame on you for to put all ATRs in the same boat. You must be a E4E member and a Bloomberg supporter.

Will ATRs be able to get a rating sheet and salary steps?


Also what happens to ATRs with a specialty license? If they are not tenured in regular common branch they have to lose tenure to take a position?

All salary steps and a rating sheet are part of being a teacher whether you are an ATR or not.

As for not being tenured in common branch. You cannot be fired, you just go in as a day to day sub with your benefits intact.

But how will you get a rating sheet if you sub day to day at different schools?
The principal gives the rating?


Is it better to wait for a speciality position to open than to change over?

My best guess it will be the Superintendent who will give you the rating sheet.

I would try to land a position then be a day to day sub.

Also will the member have to clock in to record attendance?

Are you really that gullible? Do you think Bloomberg will honor a real no layoff clause? Just as he has done in the past he will say no layoff and then go back in a couple of months and threaten them again. We will never learn.