The Disgraceful Disconnect Between The DOE's School Progress Reports And The NYS List Of Failing Schools Is Exposed By The Latest Data. 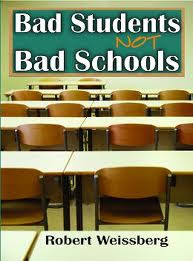 Last week New York State came out with a list of "failing schools" in NYC and of the approximately 1700 schools in the NYC system, an astounding 38% were found failing. Yes, 640 schools are "failing their students". If that doesn't surprise you how about this troubling statistic? over 200 of the schools the State found "failing their students", received either an "A" or "B" on the DOE's yearly progress report. Unbelievable, but true.

To make matters worse, 350 new schools were added to the "failing schools" list and an astounding 180 of those schools received either an "A" or "B", only 12 schools were taken off the list this year. In addition, the New York State Regents Chancellor, Meryl Tisch has criticized the DOE for closing schools and allowing the "warehousing of students", especially in the remaining large comprehensive high schools by claiming these unlucky students don't have a shot of succeeding. She went on further by citing her visit to Automotive High School where only 1% were found to be "college and career ready".

It is a pity when even the New York State Regents Chancellor realizes that the Bloomberg/Klein/Walcott Administration has failed the children in their ongoing "children last" polices.
Posted by Chaz at 2:13 PM

How does a school with a 50%ELA proficiency deserve an "A"? Because comparable schools are pulling 30% proficency, that's why. Check put the Queens scores. We are being duped!

The worst schools got A's...

The Bloomberg administration has lost an entire generation of students with his experiment in education.

Chaz, I think you have mentioned that Klein emailed principals when he was the boss not to hire ATRs. Could you link this email or info about it. I ask because as an ATR I get a cold shoulder from many of the AP's and P's that I deal with every week. I am a good teacher but feel they are treating me like a loser. So, I'm looking for some cause or validation here. Thanks.

Sorry, I tried to find the link but I could not. It was in the Principal's weekly and is unavailable to me.