The DOE Continues Their Effort To Destroy The Remaining Large Comprehensive High Schools. However, The Small Schools Replacing Them Are Failing! 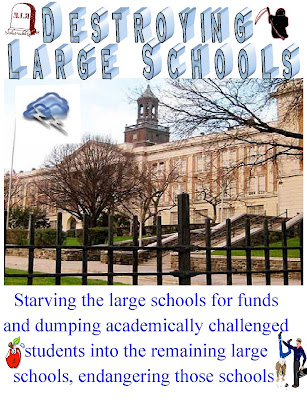 At one time the pride and joy of the New York Public School System was the large comprehensive high schools. Only the best principals and teachers found their way to these schools and the majestic buildings that housed them.These schools not only had a full menu of academic courses but also included a wide range of electives, clubs, and extracurricular activities. Almost every Advanced Placement course could be found in these schools and academic achievement associated with these schools can be found in the graduates that have become leaders of the present generation. These schools operated as a "home away from home" for the students. Then came Mayor Bloomberg and Chancellor Joel Klein who had declared war on the large comprehensive schools and are winning that war.

The hallmark of the Bloomberg/Klein/Walcott Administration was to close the large comprehensive schools and open up small themed or charter schools to replace them. First, the Bloomberg/Klein/Walcott Administration started the propaganda offensive by claiming that the large comprehensive schools as "dropout factories". To ensure that the statistics verified their propaganda, they dumped increasing numbers of "English Language Learners" and "Special Education" students into the targeted schools. To further make their point, the recently opened small schools were allowed to exclude the "English Language Learners" and "Special Education" students for the first two years and were allowed to selectively exclude other students who had academic, attendance, and behavioral problems. This allowed the Bloomberg/Klein/Walcott Administration to claim that their education reform was working.

The Bloomberg/Klein/Walcott Administration claimed that "small learning communities" were the wave of the future in education. These small schools could supply individual attention to struggling students and give a sense of community to the school. Given everything else being equal, there is some truth to it. However, the reality is quite different. The small schools opened by the DOE were usually lead by a "Leadership Academy Principal" with little or no classroom experience and an inexperienced staff usually populated by "Newbie" and untenured teachers. These teachers lacked classroom management skills and curriculum knowledge. To make matters worse, the class sizes were as large as what was in the large comprehensive schools they replaced. Look what happened to Erasmus High School. They closed it down due to poor performance and made four small schools out of it. They all failed and replaced by other failing small schools. Left unsaid, is that small schools have limited, if any electives, few extracurricular activities, and no Advanced Placement courses. One of the biggest complaints by students who go to these small schools are the very limited courses given by the schools.

Unfortunately, this has not stopped the Bloomberg/Klein/Walcott onslaught on destroying the large comprehensive high schools. Even the few remaining "quality schools" in Northeastern Queens (Bayside, Cordozo, & Francis Lewis) have seen a doubling of students with Individual Education Plans (IEPs). In other words a doubling of the amount of "Special Education" students. Eventually, as there will be few remaining large comprehensive high schools, the small schools will increasingly compete for students. This is already happening in the Bronx and Brooklyn. These small schools are now required to accept every applicant to keep their numbers up and their education success is now simply "smoke and mirrors". Look at the poor "college readiness" rates the NYC students have and it is even worse for the small schools.

The bottom line is that the Bloomberg/Klein/Walcott Administration's small school policy is a failure but the damage to the few remaining large comprehensive high schools is everlasting and that is a shame.
Posted by Chaz at 7:27 PM

Unfortunately, rather than failing, Bloomberg/Klein/Walcott have been all too successful.

Their intention from the first has been to destroy the neighborhood school as a locus of community involvement and identity. They have nearly finished off the high schools, are now attacking the middle schools, and will eventually sink their fangs into the elementary schools on a massive scale, if given the chance.

As "educators" - sorry for the obscene joke - they are understood to be gross failures, but as profiteers and nihilists they are world class. That has been their intention from the start.

I agree with you. By the time that this phase of education reform is ended as just another failure, the NYC Public School System will be made up of Small and Charter schools that open and close within the decade.

"Privatize" meaning billions of future profit into the coffers of private corporations, as well as the Ivy League carving out a lucrative niche for grads-the career of the educrat.

In the end, "the data" will be unchanged, but the profit infrastructure will be permanent.

I totally agree with Chaz. The DOE machine has left NYC's educational system a complete disaster. I don't know why any student would want to go to one of these small schools. They offer nothing: no sports not extra-curricular activities and no classes. The large schools offered 3, 4 or 3 even 5 language choices. These kids are forced to take the one that is offered - usually Spanish. Large schools have tons of sports for girls and boys - football basketball swimming golf handball softball baseball and others. Again small schools might have one sports team for the kids. And as far as extra courses and clubs, in the small schools there are very few choices if any for the kids. High school is a time to grow and explore options. Many of these small schools have classes in one hallway - boring. The schools have no tradition and no spirit - and they aren't going to build any because most of them will fail and most won't last. Disaster at the DOE again