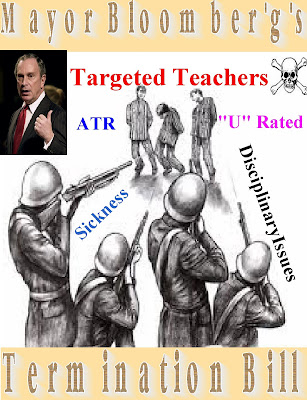 Over the Thanksgiving weekend I heard a rumor from an acquaintance that the Bloomberg Administration was very unhappy that Governor Andrew Cuomo did not support his bill to repeal "last in , first out", otherwise known as LIFO. In addition, it is becoming increasingly clear that the effects of the teacher evaluation system is at least two years down the road and maybe more if the increasing number of New York State principals (not NYC principals) can convince the State to delay it further. Therefore, his staff, with the cooperation of the DOE, are in the process of revitalizing a new LIFO repeal bill for the 2012-2013 school year. While my contact and I have no idea what the new bill will include. If it will be submitted, I do believe it is very likely a clone of last year's LIFO bill.

It is possible that because the Mayor is increasingly being seen as a "lame duck" and his legacy as the "Education Mayor" is shattered, the new bill, if the Mayor actually goes through with it, might, be more limited, such as getting rid of the ATRs or teachers who were "U" rated, etc. but I doubt it. It is highly unlikely that even the Republican Senate will fall in line this time since the Mayor's political power is rapidly disappearing as he faces the end of his unpopular third term. Furthermore, the ever rising class sizes, teacher attrition, teacher evaluation procedures, and an enforced City hiring freeze may make the rationale of a LIFO bill unnecessary. However, this might not stop Mayor Bloomberg from trying anyway. It even might be in his best interest to at least make an attempt to submit a new LIFO repeal bill to satisfy his ed deformer friends. What might the Bloomberg Bill contain? Well let's put it to the words of Pastor Martin Niemoller back in World War II.

First, Mayor Bloomberg wanted to terminate teachers who received "U" ratings in the last 5 years. I had not received a "U" rating.

Then he went after teachers guilty of disciplinary issues and 3020-a charges. I was never subject to discipline issues.

Then he went after the ATRs and I never was an ATR.

Than he went after teachers with lateness or absences and I am never late or rarely absent.

Then when I became older and was approaching my vesting date, he went after me and there was no one left to speak out for me.

Yes, it can and will happen to you unless we stand together as a profession.
Posted by Chaz at 8:55 PM

Great story. I always believed the Bloomie would take a second shot at ending LIFO since he is in a lame duck position. I also agree with you that the legislature will probably not go along with his plans. Is your source on this new bill pretty in the know?

Bloomberg will not be happy until he breaks the union. And if a LIFO bill is passed the union will break into two....Why doesn't he just go and bother some other profession and leave us the hell alone! Oh and if Cuomo shot it down lat year why would he change his mind now?

My source works downtown and picked up some chatter between high level individuals who work in the Mayor's Office.

The Mayor4Life will attempt one more time to eliminate tenure and seniority rule. He has only 25 months left to destroy those collective bargaining rights that don't exist in other states. He wants to be known as the little warrior "Napolean" that won this war and his megalomania is what drives him to this obsession.

I have never despised a person so much as I do for this mayor. Hopefully, he go down in history as the infamous billionaire mayor with no purchasing power in government.

Hopefully, there will be signs in every union established organization across America telling the mayor that his money isn't welcomed.

"Why doesn't he just go away"

Well, there is money to be made for his cronies, BIG money, if this profession is crushed according to the ed reformers plan.

Also, he simply doesn't lose often. The fact that he didn't get his way yet must be like a fly up his ass.

I also despise him. I am also starting to despise Cuomo.

Cuomo will not listen to him. Bloomberg's push to end seniority came last year. He went full throttle and failed.

He knows LiFO is going nowhere. You don't even read about this stuff in the papers anymore.

There were also 'high ranking' city officials who said we would be getting a contract in November of 2009. I"m still waiting on that.

Bloomberg is the boy who cried wolf. No one in the state legislature listens to his nonsense anymore.

Why do you think Michelle Rhee stayed out of this mess?

Bloomberg has already broken the union. In his last 15 months, he'll close every school that people will let him close, and after that happens, the union might as well not even be there...