The Racial/Income Student Academnic Achievement Gap Is Still Wide And The Numbers Are Very Disturbing Despite What The Mayor & Chancellor Claim. 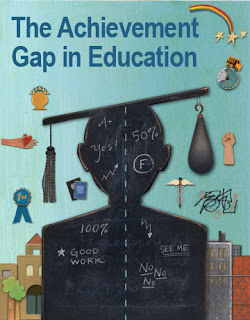 Despite all the claims of the Bloomberg/Klein/Walcott Administrations that they are closing the racial/income student academic achievement gap the actual "college and career readiness"numbers for 2011 show a very different conclusion.  For example in Queens the 2011 numbers showed that blacks have a college readiness rate of 10.5% and if you look at the black male population it falls below 10%! Gender wise females had better college readiness scores than males by 5%.  Listed below is the various "college and career readiness rates" While I only used Queens High School data, the numbers and ratios are very similar for the other four boroughs. for all the Queens High Schools. All the data for NYC can be found on pg 126 of the NYS report here.


"College And Career Readiness Rates"
The numbers showed that for every black that is "college and career ready", there are three white and over four Asian students that are academically successful.

In addition,  the New York State student progress report also showed that the Bloomberg small schools are a failure academically with an academically terrible 11% "college and career readiness score" compared to a dismal citywide 20.7% rate.  That means that only a little over one out of every ten sstudents who graduate from the Bloomberg small schools are ready academically.  This is success?  I don't thing so.  Furthermore, according to an unscientific survey by Ed the Apple, between 25-33% of all NYC high school students graduate with "credit recovery" credits and between 5-10% with multiple "credit recovery" credits.

Finally, The latest poll shows that Chancellor Dennis Walcott has seen a significant drop in his already poor approval ratings to a disappointing 37% from a high of 43% in March.  I am shocked it is still as high as it is but like the saying goes "you can fool so of the people all of the time" and there are 37% who appears to have been fooled by the Bloomberg/Walcott rhetoric of advances in education progress when the evidence shows otherwise.

Maybe the news media should be writing articles how the Bloomberg/Walcott Administration should be held "accountable" for the dismal student academic results but then again the news rags rather scapegoat the teachers instead.

Wow. I didn't think the achievement gap was that large.


The 11% college readine3ss numbers are a disaster for the small schools advocates.

Thanks for the numbers and the references. Maybe the media should be doing an epose on the DOE's failure to close the achievement gaap.

Higher graduation rates are a direct result of the degradation of academic standards via credit recovery... Behold our emperor is NAKED!

The media he controls is the emperor's new clothes which changes its color everyday.