Chancellor Walcott, First Clean Up Your Own House Before You Complain About Teachers.

Unfortunately, the rag, the Daily Snooze, oops I mean the Daily News has once again went after teachers that were accused of "sexual misconduct" but were found by an independent Arbitrator to have committed no such thing.  To Walcott and Bloomberg it doesn't matter if there is evidence to support the accusation.  Just being accused is good enough for them. Evidence?  who needs any damn evidence, if the student or administrator says the teacher did it then it's off with their heads!


That's right!  The independent Arbitrator must terminate the teacher if that teacher is found guilty of "sexual misconduct".  Unfortunately, our Chancellor is not intelligent enough to understand that evidence is required and hearsay or gossip are not evidence.  Moreover, he fails to differentiate between a teacher having sexual intercourse with a student and a teacher that touches a clothed shoulder of a student to reassure her.  To him it's all the same. He wants the right to fire them all! 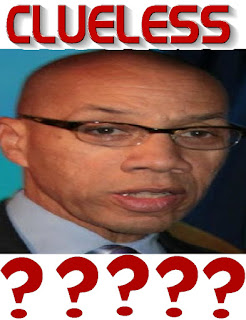 Presently, the Chancellor can terminate his DOE employees without a hearing if they are accused of "sexual misconduct" but has failed to do so.  For example take the case of DOE CEO John Shea who was accused by two females of "sexual misconduct" and have federal lawsuits against him.  What action did the Chancellor take?  None!  How about the two leadership academy principals who also have been accused of misconduct of a sexual nature.  Anissa Chalmers, and Emmanuel Polanco.  They are still principals of their schools!  If that's not enough how about the case of acting Principal John Case Jr who was found by OEO to have sexually harrasses female subordinates and students at the school.  In defending Mr Chase, Chancellor Dennis Walcott said the following.

On the new allegation, he said, “Just because an accusation is made doesn’t mean a person is guilty.”

That's right!  Our zero tolerance Chancellor for teachers is quite tolerant when it comes to his managers and administrators.  What a hypocrite and a phony. It's a good thing that he only has 188 days left in his tenure and we finally get an educator that truly understands education and what goes on in the classroom and not the walls of Tweed and City Hall.

You are so right. The Chancelloir wants to terminate teachers but looks the other way when it comes to the top people in the DOE

Chancellor Walcott is truly a hypocrite.