The DOE Admits That Poverty Affects Student Academic Achievement, Despite Their Rhetoric That It Doesn't. 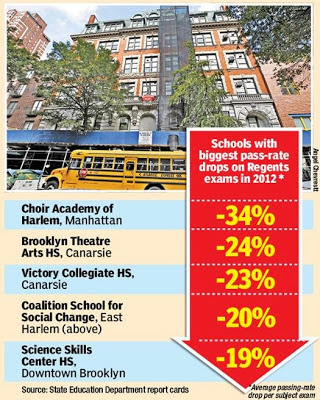 The New York Post published an article that stated that 150  schools who had their Regents graded outside their schools showed a significant decline in passing rates ranging from 6.7% in Living Environment to 3.9% for U.S. History.  Smaller drops were reported for English 2.1% and Math 1.7%.   More disturbingly were the large drops in the following schools:
At the Brooklyn Theatre Arts High School in Canarsie in 2011 77% of the students passed the U.S. History Regents in 2011 but when the 2012 Regents were graded outside the school, only 21% passed the Regents.  The same happened at the Choir Academy of Harlem, where in 2011 66% passed compared to 13% in 2012.

These incredible drops were found after New York City, under pressure from the State about shady scoring practices, selected the 150 schools to be scored centrally rather than have the scoring done in the school.  While the average reduction in passing rates of the 150 schools were not terrible, with the exceptions listed above, the reductions were significant.   While some of the drops can be attributed to teachers sympathetic to their school's students and are able to understand the student's intent in writing the essays and the use of English teachers grading ESL students, the incredably large drops in some schools can only mean one thing.  Yes, these schools had some very questionable scoring methods to boost the student passing rates on the Regents.  In other words, the school cheated!

Interestingly, TWEED who blame teachers and not poverty or their asinine policies on poor student academic achievement blamed the astoundingly large drop in Regents passing scores in these high schools on their high poverty student population.  In other words they admit that poverty affects student academic achievement despite their rhetoric  I guess student poverty only counts when it brings into question the DOE's letter grades and learning environment surveys.

The bottom line is now that all high schools will have their Regents graded independently, outside the school, how much will the Regents grade drop Citywide?  I predict it will be significant and the largest drops will occur in high poverty schools as poverty does matter in a student's academic achievement.
Posted by Chaz at 8:55 AM

I think the drops matter a lot, actually. As we have a mayor whose goal is accountability only for unionized teachers, this gives him further fodder to close schools and smear the reputations of working teachers. I'm not sure how much damage this will allow him to inflict, but I'm fairly confident whoever succeeds him may see the practical wisdom of having a scapegoat the press is willing to vilify on a more or less daily basis.

Tweed and the deformer's likely response? Teachers cause poverty!