The Evaluator For The Teacher Evaluation System And PIP+. 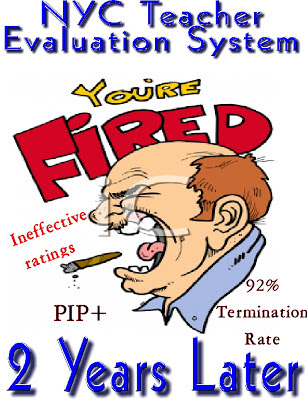 One of the more ominous aspects of the newly imposed teacher evaluation system is the requirement of an evaluator for the "ineffective teacher". The new teacher evaluation system will provide an "evaluator" for the "unlucky 87%" who were rated "ineffective" by the DOE.  These "evaluators" will evaluate and try to improve the teaching ability of the "ineffective teachers".  This sound good and UFT Michael Mulgrew considered it a win for the union.  However, the new "evaluators" will be come from independent companies that are paid by the DOE.  Sounds familiar?  It should be because that is how the Peer Intervention Program Plus (PIP+) works.  Yes, the very same PIP+ that has resulted in a greater than a 90% rate upholding teacher incompetence.

Based upon the latest pilot study, approximately 6% of all  teachers were rated "ineffective".  That means in the New York City schools of 72,000 teachers, .that 4,320 teachers annually will be rated "ineffective" and since 87% of them will end up with an "evaluator" and if the PIP+ statistics (92%) are any indicator, then it is quite possible that the average annual teacher termination rate would be around 3,500.

Finally, unlike PIP+ which is voluntary, even ifr the union didn't tell you that, the teacher evaluation system "evaluator" is required and it gives the DOE an opportunity to rid themselves of both good and bad teachers and despite what Commissioner John King said./  The DOE will try to fire their way into academic success and ultimately fail as usual.  If it looks like a duck, quacks like a duck, then it is a duck and the "evaluator" is simply PIP+ by another name.

Cool piece. Two things:
1. While their job will be to evaluate teachers, at my last check the moniker the DOE/UFT is using is 'validator'. I think the implications of that term say it all, don't you?

2. As their ineffective grade is being 'validated', 13% of teachers will be going through the process of a guaranteed independent appeal. Those 13% would have lost the usual 'chancellor's' appeal and the UFT would be going through that new appeal process (you and I totally disagree on this. Currently, 100% of teachers can't get a fair appeal if rated poorly. The UFT did win us the new protection of an independent appeal after the usual appeal (well, they won 13% of the 6% rated ineffective that protection, anyway). Now, did they need to change the whole eval system to do that? Couldn't that just have been negotiated in the next contract (set to take effect in the year 2035)? Sure. But it is, to the extent of people who are covered by it, a new protection).

Great post. I don't think the number will be 3500 who will be terminated only because there aren't that many arbitrators or hearing dates to get rid of that many people. Tenured people will still be entitled to a 3020A hearing.

I know it was called a validator but I didn't want to confuse the readers since there is no real world as validator, except in the jargon of the DOE.

I respectfully disagree NYCDOE NUTS. 100% of tenured people are entitled to a hearing under the current system before a neutral arbitrator where the burden of proof is on the Board of Ed. It is caled a 3020A and if you avoid PIP+, you still have a fighting chance. Also the 13% who will be before an independent panel after year one might not do very well because the Board will just say they rated them badly because of their test scores and their Danielson scores and harassment had nothing to do with it. Burden is on us in those hearings. Some gain.