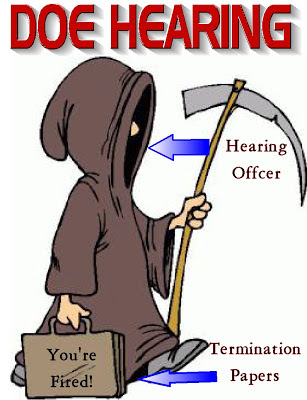 I have been following the unfortunate case of Sheila De La Cruz and the lesson I learned is why teacher tenure is so important.  The New York Post printed an article of Ms. De La Cruz appealing her firing after receiving a "due consideration hearing" which is simply a termination proceeding.  You see paraprofessionals have no tenure and when accused by a student of inappropriate actions, are usually in danger of losing his or her job.

What was Ms. Cruz accused of?  She sent too many calls and text messages with the high school special education student she was working with.  According to the investigation there were 57 such calls and texts.  However, before you think that there were too many, you should know the student is a difficult child with many absences which resulted in Ms. De La Cruz to text or call the boy about his absences and behavior.  In fact, part of Ms. Cruz's job was to provide "outreach" to the student which means texting and contacting the student and the house.  Moreover, once the boy got hold of Ms.De La  Cruz's cell phone he downloaded a picture of Ms. Cruz wearing only a thong and showing her bare back, nothing any more revealing than what the New York Post and Daily News publish almost daily.  Therefore, many of those calls and texts were about the student's demand of $3,000 for not notifying his mother.

The only fault Ms. De La Cruz did was not reporting the theft of the photo immediately since the photo did not expose any inappropriate parts of her body. Her timely reporting of the theft may have not resulted in her termination.  Regardless, why she was terminated when there was no sexual touching or propositioning is troubling and in the "kangaroo court" of the DOE you are guilty and never innocent.

That brings me to the "teacher evaluation system" where two consecutive "ineffective ratings" will result in almost automatic termination of the teacher since the burden of proof will be on the teacher to show that they are not "ineffective" and only the lucky 13% will have an independent Arbitrator to show that their "ineffective rating" was unjust.  As for the other 87%?  Just read about what happened to Ms. Sheila De La Cruz to see their fate.
Posted by Chaz at 4:55 PM

never thought I would see the effective end of tenure. 2 "ineffectives" and you are out - if a principal wants you out you are toast

do you know if you are still allowed to collect your pension or do you have to retire before you go through "due process"?

After having my own experience with this school and the principal, I can say that there is a total lack of concern for educators. You're on your own- and if something goes wrong, you better come up with a way to deal with it!

You can gop through your hearing and even if you are terminated, you will still collect your pension.


The DOE cannot take your pension away!

I just found out about this case and, while I'm the first person to defend teachers, I know a man that worked with Sheila and she was totally inappropriate with him (romantically aggressive on the job). It does not really surprise me, unfortunately.