Another Reason Why The Bloomberg Graduation Rate Is Bogus. - Grade Inflation 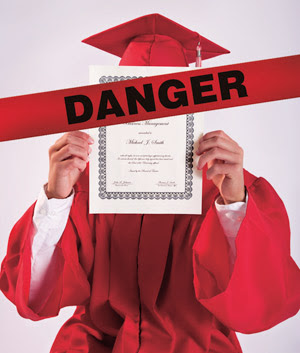 Most real educators snicker when Mayor Bloomberg, Chancellor Dennis Walcott, and the news media brag how the graduation rate rose over the Bloomberg years.  The truth is that the graduation rates rose not because the students were getting a better education but because of artificial means used by the DOE and principals. While most educators point to the extensive use of bogus "credit recovery courses " and the poor "college and career readiness rates" of these high school graduates, one thing that does not get enough publicity is "grade inflation".  Yes, many principals not only pressure teachers in passing students who don't deserve to pass by requiring their teachers to have a minimum class passing rate of 80% or higher but require teachers who do fail a student to limit the failing grade to an artificially high value.  A prime example is the often maligned Flushing High School.

On the Ed notes Online blog a Science teacher Mr. Ok  Seung Young  has published his three letters of complaint to top DOE officials who have refused to take action against Principal James Brown's outrageous grading policy.  Yes, the very same James Brown who was cited in the New York Post and my blog for his misconduct, including charges of "sexual harassment" and was found guilty of the misconduct by a jury in court but seemed to get a job with the DOE anyway. These letters can be found Here, Here, and Here. 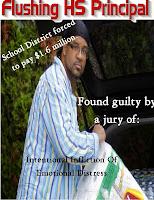 According to Mr. Ok Seung Young, Principal James Brown has decreed that no student can get a grade lower than 55, even if they don't show up!  In addition, the grade is worth only 33% of the final grade which can allow the administration wiggle room to use "credit recovery" and other dubious methods to artificially raise the failing student's grade to passing by year's end.  In other words, the student need only show up for one of three marking periods and do the required work and get a passing grade along with some artificial grade inflators, unbelievable!

If Principal James Brown's bogus grading policy is allowed to stand, which seems to be in violation of the New York State grading system, then what kind of education are these students actually getting?  That's right its "junk education"!  What kind of message are we sending to employers allowing students who fail to show up and don't do the necessary schoolwork by giving then a bogus diploma.  Is it any wonder that New York City employers complain that many high school graduates lack the proper skills and work ethic to succeed in the adult world? If you are a employer, would you hire a Flushing High School graduate knowing that the awarding of the diploma may be tainted? It's a real pity that the Bloomberg administration is more interested in the bogus graduation rate than the real education necessary for our students to prepare for the real world.
Posted by Chaz at 9:05 AM

This teacher is a real meanch and the DOE should be ashamed of themselves for putting this bozo in charge of a NYC school.

well it happened - I am in a building with 2 schools and we both got ambushed today by the atr field supervisor and his trainee. I told him about the awful conditions that we deal with every day. I told him I have never received professional development for Danielson, the common core or even how to use a smart board - an important thing if you were excessed from a school that never had them !! He went over a lot with me and I want to post it all - when I have more time and more clarity in my head . I felt like prey for a vulture. The most person thing that I got from it was the following. I asked him if every atr was being observed (It should happen to me in November or December) and he said he didn't know. I replied that it seems to me that a grievance can be filed for all atrs if we are all not treated equally. How can the observations be valid if we are not all observed. He said I should bering it up with the union. Anyone have any idea if that seems true??

You mean "credit recovery" is a gimmick? I'm shocked to hear that!

The atr supervisors are targeting those ATRs who received a U last year or who have alot of years in. Most ATRs who received an initial U got it because of absences or lateness. I don't think any of the observations can hold up, for a wide variety of reasons. Namely, "teaching out of license", babysitting, not knowing the students, not being able to prepare a lesson plan, working with someone else's lesson plan,bias on the part of the atr supervisor and age discrimination. I wrote in this blog back on 9-29 that this was going to happen. Keep an anecdotal record of your meeting. Remember Bloomy's out as of January 1st.

This is a fascinating analysis by a DOE insider analyzing the data from the last 12 years of schools under Bloomberg
Definitely worth a read especially the section on graduation rates.