The New Recipients Of My 2013 Golden Turkey Award. 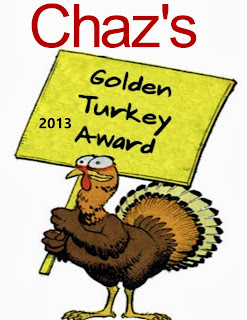 Yes, its Thanksgiving and the time for me to issue my annual "Golden Turkey Award".  Who are the most deserving recipients of the award this year?  There was quite a bit of competition this year.  Christine Quinn, Chancellor Dennis Walcott (past winner), President Obama, Meryl Tisch, the idiots at Tweed, and of course Mayor Bloomberg's failed education legacy (past winner).  However, I have identified the three most deserving individuals that are my recipients this year because of their failure to understand the New York City Public Schools.

First, and foremost is the Commissioner of the State Education Department, John T. King who has proven to be inept at his position and alienated everybody he encounters, except the Governor.
Mr King has imposed an unworkable "teacher evaluation system" complete with "junk science" and was bitterly disappointed when only 1% of the teachers statewide were rated "ineffective".  To ensure that doesn't happen in New York City, he imposed a more stringent "teacher evaluation system" and to make sure that more teachers are rated "ineffective", the "junk science" scores alone can be used to determine a teacher's rating.

Now he has tried to impose high stakes testing throughout the State from Kindergarten to high school and demands the use of "common core" even when the materials and teacher training are lacking.  He tried to impose restrictions at public meetings that backfired in his face.  Moreover, his "I'm always right" attitude has even turned off many of his allies.  Finally, his insistence in keeping inBloom inc. has made him a "laughingstock" of the country as all the other States have either dropped or are dropping the company.

Second, is the Federal Education Secretary, Arnie Duncan, the basketball playing buddy of the President, who has shown to speak out of both sides of his mouth and in his latest gaffe has complained that "white suburban soccer moms are discovering that their children are not as brilliant as they think".  Only to apologize the next day.

Arnie Duncan's education legacy as head of the Chicago School System was of failure and his tenure as the Education Secretary is no better.

I guess Ms. Brown would be happier if our justice system was more like Nazi Germany's or the Soviet Union under Stalin.

My vote is definitely for our chancellor dennis the menice walcott simply because as schools chancellor, responsible for 1.1 million students, was unable to go over to the mayor (mikey bloomshit himself) and advise mikey to put the ATRS into the classrooms and social worker guidance offices!! Any REAL chancellor would have said hey mikey, whadda stupid,,,put the teachers into the classrooms your fregen moron. But no, our famed chancellor choose to repeat words like a puppet that his legacy will be remembered...

Who is this campbell brown character. This dame needs to clamp her dopey southern drawl and stick to her loser business which she has evidently ditched for a place in education for which she obviously has no clue. For example, this dame needs to hang out in the deans office at one of our south bronx schools one day......she would see what goes on in the schools - constant fighting, constant hate is what only seems to matter to most nyc high school students.....it sounds ridiculous to people but the reality is you have to just watch what goes on at the high schools in the south bronx and then and only then can you truly understand what the future of this city and country is headed for. Campbell brown, whoever you are, take a good look in the mirror cause once age gets you, well, you will be done and irrelevent my dear. Good riddance and please do me a favor, ZIP IT

Why isn't campbell brown commenting on these types of news stories, this is more about what she should be focusing on:

I saw a piece on the news last evening that spoke about the government diminishing the free food stamps programs by millions of dollars. The television show went on to say that they are predicting that the future for the current generation might very well be food lines like you saw in the 1930s depression. Yes, when the free handouts dry up, we will begin to see food and supply lines like we saw in the 1930s depression....The bigger problem is that most of the current generation thinks that the "government" will continue to pay for all their expenses,,i.e. rent, food, baby supplies, etc. The word around the world is that the US gives out "free" food, house, education, child birth needs even free phone (obama phone) The current generation has no clue what is going on in government they are too busy fighting with each other. However, the program went on to note that the combination of long food and supply lines, compounded with their lack of understanding will create chaos in the streets of the USA

Psychology assignment writing services are essential and they have become very popular for those seeking psychology essay writing help since most of them seek Psychology Research Paper Services.