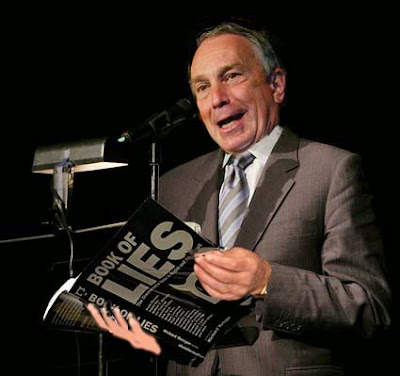 Mayor Bloomberg's failed legacy as the education Mayor is a lie and history will show how he tried to remake the New York City Public School system in his own image and ended up with a school system in chaos.  Under Mayor Bloomberg, teacher morale has never been lower as they are demonized by the Mayor, his media allies, and his cronies at Tweed.  During his tenure there has been no improvement in academic achievement  a widening of the racial/income academic achievement gap, and an "education on the cheap" policy.  that has resulted in rising class sizes, the largest in the State. Let's look at what changes he made while in office.

During the Bloomberg years he closed down 160 schools, many of them neighborhood comprehensive large high schools and replaced them with small schools that showed no real improvement in "college and career readiness rates". These small "Bloomberg schools" have a limited academic curriculum, very limited extracurricular activities, and excluding self contained special education and English Language Learners. In other words these schools exempted "high needs students".  Furthermore, the Bloomberg small schools took little of no "over the counter" (OTC) students and could recruit students throughout the city.  The result was that the remaining large comprehensive schools became a "dumping ground" for these OTC and  "high needs students'.  Is it any wonder why these schools were targeted for failure and eventually closed?


The closing of so many schools resulted in thousands of teachers being excessed and because of the "(un)fair student funding formula", principals wouldn't or couldn't select senior teachers for their vacancies, even when it was best for the school's students.  Under the Bloomberg Administration education policy, principals selected the "cheapest" and not the "best" teacher for their students in the "education on the cheap" and "children last" polices. The result is an ATR pool that has over 2,000 excessed experienced educators with little chance of getting a vacant position, just worthless temporary leave replacements.

Money sucking "Children First Networks" (CFN) that are supposed to provide professional development services to the schools but increasingly dictate to the principals how to run their schools and who to hire and how to fire tenured teachers.

Inexperienced Administrators with little classroom experience who try to run a school as a business and fail miserably in doing so.  The "Principal Leadership Academy"  is littered with fail administrators who don't have a clue about teaching in the classroom. Of course the three Chancellors under Mayor Bloomberg were not educations and all needed waivers from the ever compliant State to do the Mayor's dirty work.

The proliferation of charter schools, 184 at present. Many of then with a segregated student body, excludes "high needs students" and experience high rates of teacher turnover under the Bloomberg Administration.  In fact the Bloomberg Administration favored the charter schools and allowed them to co-locate, free of charge, with public schools and take over their much needed space.

The virtual elimination of neighborhood schools and with it an effective PTA who used to act as a check to a school's action and was a balance to a school's top-down policy. A hallmark of the Bloomberg Administration's educational policy was to cut out parent involvement in their child's education.

Finally, as the schools have experienced a 14% reduction in their budget since 2007, the large schools only received 80% of these reduced numbers while the more favored Bloomberg small schools saw budget increases of 110%.

For a more policy-like article about the Bloomberg years in public education and what the new Mayor needs to change please read my colleague Marc Epstein's, articles called "cleaning the stables" Here and  Here and is a most read if you're interested in our schools.

De Blasio should read this b/c you nailed how Bloomberg ruined this already flawed system to a T. In my opinion, it is irreparable after this past decade of Bloomberg

I think the field supervisors are just milking their easy as you know what position and will give S ratings as long as your attendance is fine. Actually, I think their hands are tied and they struggle to observe everyone.

The most incredible thing to come out of looking back at bloomterds strategy is how is was all planned out. This snake was able to manipulate the teaching workforce and separate educators while trying to pit one against each other. The creation of the atr pooL was a deliberate attempt to rid tenured educators out of the system. But my question is why? Our tenured teachers are some of the finest in the world so it baffles me to think that midget mikes strategy was to rid the system of tenured educators. You mean to tell me it was done all for money?? No, this was done by a miserable creep who has serious issues with our union and every other union for that matter. This midget mike was destined to "defeat" the UFt any which we he could but he soon realized he was dealing with a gorilla

dont forget to mention all the
AP's that have been excessed and school secretarys. The cost of all this is well over one hundred million dollars.

VT:
Thanks for the compliment.


I agree with you to a point. Remember the "gorilla:" had to agree to ignore the State Civil Service Law to form the ATR pool in the first place.

thanks for sharing chaz
I hope you are right about the field supervisors!

this analysis revealed that for all the noise it seems that under Mayor Bloomberg student outcomes were flat
http://dianeravitch.net/2013/11/04/the-bloomberg-reforms-an-assessment/

I have read a few of your posts in the past year. If this were College Football, your BLOG would be playing in Pasadena in the BCS National Championship!! Good work on this one!!