Chancellor Carmen Farina Is Part Of The Problem And Not The Solution. 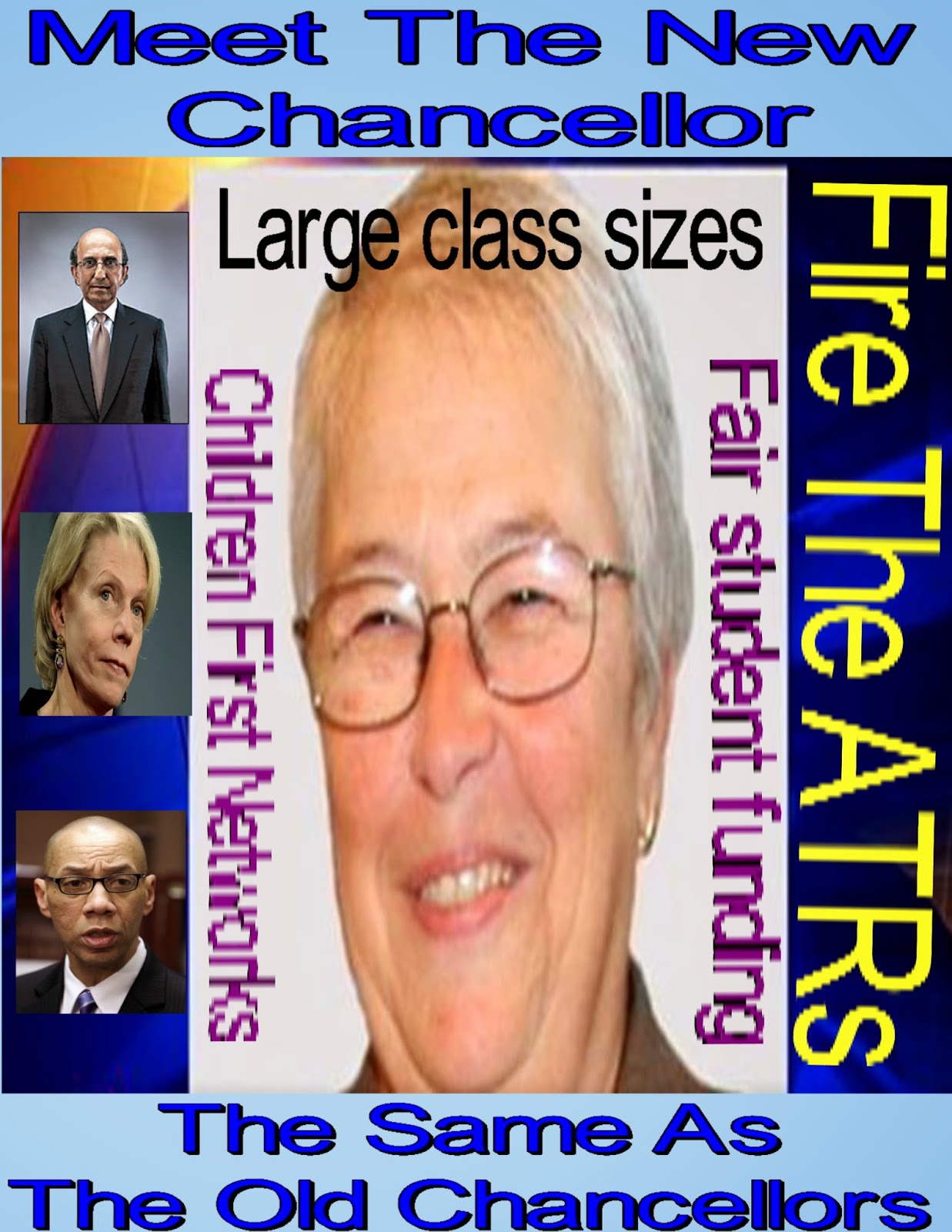 Its very interestingly how the leadership of our union and the new Chancellor appears to get along with each other which was not the case under the Bloomberg administration.  Its no wonder that UFT President Michael Mulgrew bellowed that there's a new tone at the DOE.  Yeah right, and I have a bridge in Brooklyn to sell you.  Unfortunately,  when it comes to real change for the teachers in the trenches, its still the same old song.

First, a little history. The new Chancellor, Carmen Farina, was a very important part of the Joel Klein's inner circle as a Deputy Chancellor and only retired when she saw much of her authority taken away and given to a subordinate, Eric Nadelstern.  Encouraged to come out of retirement to be the new Chancellor for Mayor Bill de Blasio, she has been a vast disappointment and even suffering a Cathie Black moment by failing to close schools during a blizzard and then while it was sleeting with freezing rain by saying "its a beautiful day".  Rather than do what should have been a no-brainer and  "clean house" at the DOE, Carmen Farina has instead promoted some long-term Bloonberg bureaucrats into the highest positions as Deputy Chancellors.  Katherine Grimm and Dorita Gibson.   Moreover, her failure to remove some Superintendents and the continuation of the useless and money-sucking "Children First Networks"  says everything about her failure to change the tone at the DOE.   Moreover, Carmen Farina's past and present actions suggests she is pro principal but not pro teacher.  As Principal she had a 80% teacher turnover rate which strongly suggests that she didn't collaborate well with her teaching staff.  Furthermore, stories about her actions from Betsy Combier and Phillip Nobile's comment show that she has made some very questionable decisions over the years.

Presently, Chancellor Carmen Farina has continued her pro principal agenda by not imposing a hiring freeze until all the excessed teachers are placed and gave principals even more authority to remove an ATR from their school in a day.  Moreover, under the Chancellor the DOE fought hard to demand that teacher lesson plan specifics be dictated by the administration.    Furthermore, the new Chancellor is giving the principals the power to charge a long-term ATR with the vaguely defined term of "problematic behavior" that can lead to the expedited ATRs termination in a one day 3020-a hearing.  Additionally, while she reduced the  Danieson components to eight from 22, this was at the request of the principals and not to help teachers since it made the administrators job very difficult to cover all 22 components and refused to lessen the amount of observations under the teacher evaluation system.

During the contract negotiations, the Chancellor's position was to have all the ATRs fired by giving them only four months to find a position.  With her approval for the continuation of the "fair student funding" any time limit is simply a termination program for senior teachers and she knows that,  According to one blogger, South Bronx schools, Ms. Farina claimed only 400 of the 1,200 ATRs are capable teachers.  I guess to the Chancellor these are the teachers that never received an unsatisfactory observation or went through a 3020-a hearing.  More importantly, she has convinced the union to have a "caste system" and have the lowest caste being those teachers who won their 3020-a hearings who are known as the "untouchables".  Finally, the chancellor has retained the teacher termination requirements under the teacher evaluation system that makes it very difficult for teachers to win their case if given two consecutive "ineffective ratings".

When compared to the Chancellor's of the Bloomberg Era, she may cooperate with the union leadership but when it comes to the classroom teachers she still practicing many of the destructive Bloomberg Era policies and its still "education on the cheap" under her tenure.  Chancellor Carmen Farina is still part of the problem and not a solution.

It is not difficult to cooperate with union leadership hell bent on collusion with the DOE and the NYS ed deforming crew. Which part of the deform agenda has Unity opposed? Have I missed something?

The worst part are the networks. I'm sure the ATR issue is terrible, maybe even worse but to me, the networks are terrible. The "phase out" network in the Bronx is horrific. Phase out network? Is this the network that helps phase you out? So ridiculous. Mark Chernikoff is a complete and total MORON. Another FAILED administrator hooked up with his little connection by the cluster leader. This guy Chernikoff is a fukkin idiot. He's wrong about everything. Chaz you should blast this worthless piece of shit making 160K a year. The guy wouldn't be an effective substitute, let alone a "phase out network leader". What kind of title is that? Fariña should be ashamed of keeping useless individuals like this Shmuck around. I spoke with him at my school. I couldn't believe how incompetent this fool was. All of these idiots get promoted to fake positions that are UNNECESSARY. You do not need these people. The school can phase out without him, trust me.

There is a principal of a large troubled high school of Queens that explains why the CFN network exists. This principal was once the AP of this large Queens school. She struck out on her own and became principal but it didn't work out for one reason or another. She became leader of a CFN network and she worked behind the scenes to get her old Queens school labeled a "turnaround" school. The turnaround plan didn't work but she did become the appointed principal of the school. It's still doing poorly academically. But the CFN network is a safeway house of sorts for troubled but well connected principals. Most hope that a couple years of work with CFN and they can start over at another school, their scandals behind them.

She is a rotten excuse for a human being. Evil and destructive. Those who suffered her evil stupidity at Arts and Business H. S. will never forget her evil and destructive trail of wreckage.
An obese non-entity who is double dipping as shr destroys yet another school and countless lives.
She is a symptom of everything that is wrong in nyc schools.

Speaking of the origins of the problems all your readers may want to take a look at and help edit Shael Suransky’s Wikipedia page. Both the content and the history of the edits suggest that Shael himself is writing the page and then blocking any contributor who tries to add more factual data. See the history of the page edits https://en.wikipedia.org/w/index.php?title=Shael_Polakow-Suransky&offset=&limit=500&action=history that show that the initial bulk of the entry was written from an IP address shared by computers at the Tweed Courthouse where Shael had his office. The bulk of the entry was also written right after election day and Mayor de Blasio’s election when it became clear that Shael would have to go. A more accurate analysis of Shael’s career can be found here: http://withabrooklynaccent.blogspot.com/2014/01/corporate-reform-versus-child-centered.html and that information should be included in the Wikepedia entry. But Shael tries to block. Help out and add the info to Wikipedia.

Carmen Farina is the "new Black"

Great post about the old bat. She was a Diana Lamm protege and a strong supporter of Joel Klein until he turned on her.

Does anyone know the best source for figuring out retroactive pay for recent retirees? Will the bump in the pension be retroactive?
Thanks!