The Union Screws Members On Unpaid Leave By Excluding Them From The $1,000 Bonus. 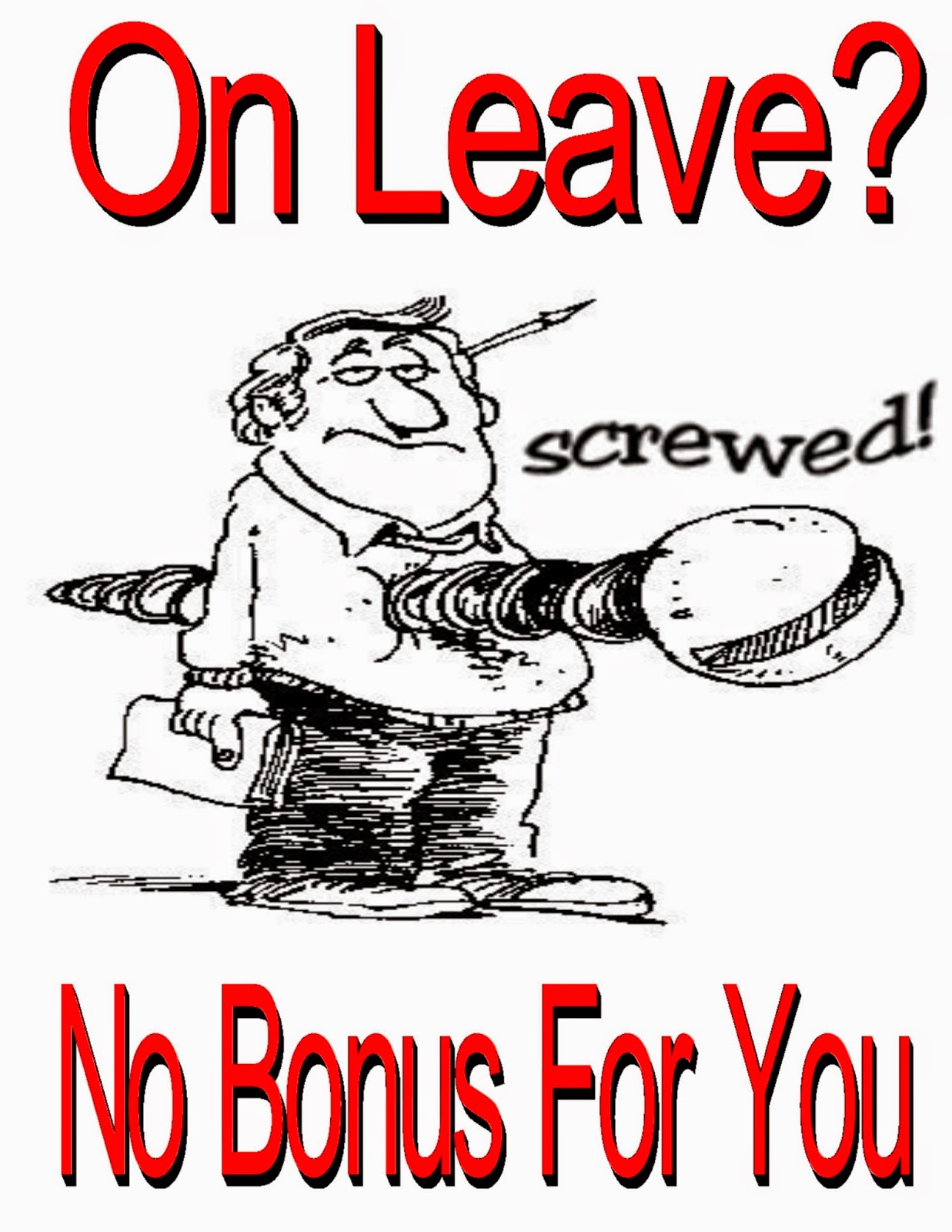 Yes, its true.  Chalkbeat has reported that our union has screwed another group of its members by excluding the people who are on unpaid leave from receiving their $1,000 bonus.That;s right 3,600 UFT members will not be receiving their $1,000 bribe bonus since they're not considered active members. These members on unpaid leave now join those who have resigned or were terminated, ATRs, discontinued teachers, and those members who die before the end of the contract as being screwed of their hard earned money and "due process rights" by a union that seems to have different rules for different groups of their members.  What ever happened to union solidarity?

Interestingly, history has shown that this is the time when many female teachers take their six week unpaid maternity leave as they have the summer off to take care and bond with their baby before having to go back to work in September.  Therefore, quite a few of the teachers on unpaid.leave are having babies and are being screwed out of the $1,000 bonus at the very time they need the money the most.

The eliminating of the 3,600 UFT members who are on unpaid leave from the $1,000 bonus will save the City  3.6 million dollars.  This is yet another example of the union not being honest about the various issues pertaining to the proposed contrct.  What's next? that we will be paying for our Health benefits after all?
Posted by Chaz at 10:08 PM

In defense of the union, the workers should have a certain time period to have to report back to work.

What would stop someone from getting paid while on leave and then saying bye for good.

I am unclear what happens after October 15, do ATRs get forced placed or continue weekly rotation? TIA

Wow. People who dare to have children and take time off deserve no consideration?

As for health care, UFT's iron-clad guarantee as of a few weeks ago has devolved into something subject to binding arbitration. This could easily gobble up the 2% real raise, the bribe and more.

Has anyone received ballots in the mail? I am a substitute teacher and was told that I would receive a ballot in the mail since I receive my check in the mail. As of now, I have not received anything, only emails from Mulgrew and the UFT paper. If you know something, please let me know.

To Anon 5:26: No forced placement. It is my understanding that you go on an interview. If the principal wants you you must report to that school. Otherwise you continue in the ATR pool. (I checked with a union official on this.)

But why keep up the weekly rotation? It's demoralizing and demeaning. Truthfully, I've never thought of what's it's like to be in prison but I now have a lot of empathy for prisoners. It's not just being surrounded by degenerates, abusive authority, and squalid surroundings; it's the mind numbing boredom. The absent teachers leave no work- not that the "students" would do it any way. Yesterday they were tossing textbooks out the 5th floor window every time I turned my head. Today a female student spent a half hour describing to a group of enthralled male students how she gives oral sex to her boyfriend every morning. My friend was in a school last week that has no teacher restroom and walked into a 9th grader masturbating. Then we have to take direction from arrogant first year teachers. Talk about unprofessional behavior(!) - give those guidelines to everyone. ATRs are the only professionals left in this disgusting profession.

Anon 3:45
I Agree monthly rotations would be just a bit more humane..Yet it is all still INSANE
Anon 10:23 no disrespect but this is not the time to start a sentence with "in defense of the union"
How about in defense of most teachers who put in their time and our union has stabbed them in the back ??

Does anyone know when we'll actually get the $1,000 bonus? Will we get it before summer or will they make us wait until September/October? Chalkbeat made it seem like we'd have it as early as next week, which just doesn't sound right.

What happens when you experience ATRdom...guess you be kissing the bosses behind cause you think that will protect you..

Wow! When can I get my greasy fat fingers on that money and f--k my fellow teachers and profession? You're disgusting.