The DOE Continues To Punish ATRs Who Won Their 3020-a Hearings And That's Unfair. 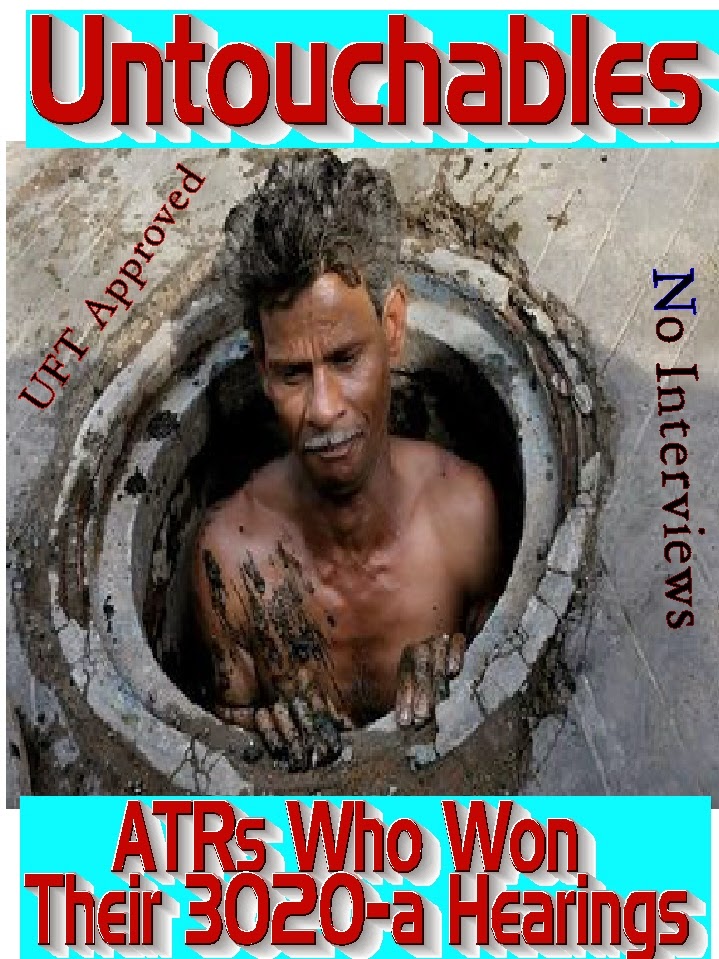 One of the most disturbing part of the proposed UFT/DOE contract is the "caste system" that is being established by the DOE for the ATRs with diminished "due process rights" ,  lack of a "mutual consent" requirement, and worst of all the punishing of ATRs who won their 3020-a termination hearings and that's unfair.

According to the Memorandum of Agreement (MOA) the union has agreed to allow the DOE to continue to punish those ATRs who won their 3020-a termination hearings by agreeing that the DOE did not have to offer these ATRs an interview or a "provisional placement", no matter how long ago their 3020-a hearings happened.  These ATRs who survived their discipline process are now known as the "untouchables" and are being placed in a separate, or lowest category of the union approved DOE "caste system".

Approximately 25% of the ATRs are now classified as "untouchable" and they include any member that received a fine of $2,000 or more, a 30 day suspension or longer, and who agreed to a stipulation.  Moreover, there is no time limit, looking back.  That means that a member who won their 3020-a termination hearing in the last century could be included as an "untouchable".  The lowest DOE caste.

These "untouchables" include many quality educators who did nothing more than being targeted by a vindictive or biased Principal, or challenged an administrator about violating their or their students rights (IEP for one) that resulted in the bogus or frivolous 3020-a charges.  Because of how the New York City 3020-a arbitration works, the arbitrator usually gives something to the DOE and a $2,000 award is simply a slap on the wrist.  Therefore, almost all teachers who went through the 3020-a process is included in the lowest DOE caste, the "untouchables". Therefore, no matter how long ago an educator was subject to the 3020-a process and no matter how many satisfactory observations and ratings they received since, they are now "untouchable" according to the DOE.

How can our union have agreed to this travesty of justice in allowing the DOE to punish the ATRs who won their 3020-a termination hearings by placing them in the lowest caste and treating them as "untouchables".  Shame on the DOE who developed this "caste system", shame on the union leadership who agreed to it, and shame on the members who vote yes for this unjust contract that treats its members differently.

An incredible betrayal by our union. How could the union present this to its members? How can any member vote yes to this? All you teachers out there who brag about how you wish you could have been involved in fighting discrimination in the 1960s now have your chance. Stand up and speak out. Voting yes should not be an option.

This contract is unjust to ATRs, 3020A survivors, and teachers in general.

As schools become privatized, the hedge funders will become rich and career public education will go the way of the dinosaur. You must vote "no" to this contract. Mulgrew and Unity are not our friend.

I was at the chapter meeting for retired teachers yesterday and all I can say is that is a good thing we can't vote. One after another got up and thanked Mulgrew for the great contract he got. (Unlike me, most will not get any raise as they retired too long ago.) One woman I met on line had such a negative opinion of ATRs it was obvious she never worked or knew one, relying solely on media for her info.

I have much to gain if this contract passes, but pray it doesn't. I only hope there are enough wise people who will not be swayed or scared into voting for something so wrong.

Am i the only one who is tired of the same posts day after day?

Please make sure you memorize the Unity pledge.

8:58, this is an ATR blog. Chaz writes great stuff but the majority is the ATR stuff that only ATR's care about, which is about 2% of the teaching force. It's a different world and Chaz nor the other ATR's fail to realize that the non ATR's don't really give a shit about the current ATR's. Most of the mentality is self centered and stay alive, forget other peoples problems. The DOE shd just make several schools in each borough of only ATR's. You shd only get a job at ATR high school if you're an ATR.

Happened to mention this provision to an education attorney today. He could not imagine that the UFT would agree to this. When I reiterated that this is part of the contract, he said that the union should be taken to court.

So many things to take them to court on. Certainly not protecting the members nor working in the members best interest.

Are you some sort of idiot? True Chaz writes about the ATRs but that's because the new contract really screws them over.


The ATRs should be advocated for and its not just Chaz, but nyc educator, ICEUFT, and others who see the injustice.


Chaz just keep writing. we all enjoy your insights.

What rookie workers in this industry fail to realize is their careers w ill be destroyed by this contract-hey roookies-check out the turnover rate of teachers in the charter schools-this contract assures that many of you will be working under those working condtions in the near future-enjoy all of that 700 bucks that u will spend yesterday-chump change for rookies...

How any teacher cannot see that the ATR problem is every teacher's problem as we can become ATRs at any time now or on the future is remarkable. Whether this June, next June or 9 Junes after that, with this discrimination in place it affect all of us as anyone can be excessed. I guess, those who refuse to care, will only care when its their turn to be an ATR, then you will hear their cries for empathy and justice. Screw the naysayers, we are all in trouble.

Havanna Cuba is a nice place to live. NYC residents can find shelter and soul peace of mind purchasing a villa in Havanna Cuba. YOu will lose some freedom rights but hey who the hell wants to work in this carnival of ignorance and incompetence. The NYC school system has been destroyed and we now have these bow legged cross eyed APs trying to act like they are some sort of business person....lol....its too funny seeing an AP (bow legged both female and male) walking down the hall with their matching clothes (just like the students matching their red tee shirt to their red jordan sneakers)then you meet with them and at that point you are realizing that this is a bloomberg appointed jerk off. This is a joke people most of the APs in the system are the problem now...You see, the principals (if you want to call them that) really do not participate in any type of daily activity. YOu never see a principal but you see bow legged people (APs) all the time and these are the screw ups....they cannot communicate, they sometimes cant even speak english!! Need I say more. The other day I had a meeting with my "AP", I mean this woman was dressed to the tee...fancy dress, matching jewelry, expensive shoes, make up galore covering her real appearance however.........that same day I met the woman in the parking lot as I was going to my car......Well let it be known,,this woman's (the so called AP) car was filled with more garbage, cans, plates of food from weeks old, wrappings, and many other (items I do not want to write about) stuffed into the back seat of the car.....the odor was reaping out of the car!!! This is your typical AP all a front but when you peel the skin its nothing but a dressed up piece of trash

All the younger teachers are voting yes. They do not understand the implications of that at all.

UFT telling everyone if we vote this down, we will be at the back of the line to get a new contract.

What has happened to due process? As the union is confident of the worth of the contract, the UFT needs to have a mass meeting to explain all of this to the ATRs.

To president Mulgrew we say:
By agreeing to this expedited process you appear to be conceding to the myth that ATRs are all bad teachers instead of educators caught up in school closings and co-locations.
Principal among our concerns, we wish to have a full enumeration of all actions that would constitute "problematic behavior".

That's why I created a petition to Michael Mulgrew, UFT president.

If yoi do not take lump sum.your Retro pay dies with you when you die
Retro pay does not go to your estate
. Is that lawful?

All these Non-ATR teachers who look down on ATR's hear this message. If you vote for the next contract, good luck with your 4 time a year Parent Teacher's Conferences and your expanding meetings with Parents on Tuesdays. If you don't think that these additional obligations are time consuming and burdensome, wait until those times come and you are getting harassed by your Principal for some unimportant paperwork or bulletin board that HAS to be put up by a certain time. Money is nice, but we all have lives to enjoy outside of school.

This "Retro" pay is really FutroPay, the newest game from the NYS Lottery. Rules:
(1) You keep living, we'll be paying (eventually)
(2) You die, oh well, bye-bye.

It is the same carrot on a stick that the DoE has been holding out to us forever. Want more 25 %money, ok work 25% longer and sign away many rights. Want a sabbatical,since that is the offset other districts do not have? Ok,but now they have to be grad courses, in an approved field, in the NYC metro area, and meeting during the school day.

Don't fall for this contract. You too may one day be an ATR, sooner than you think, and with the coming bloodbath in the ATR pool, your Futroactive pay may be at risk too.