DOE's Education On The Cheap Policy - Its Not About The Students, Its About The Budget. 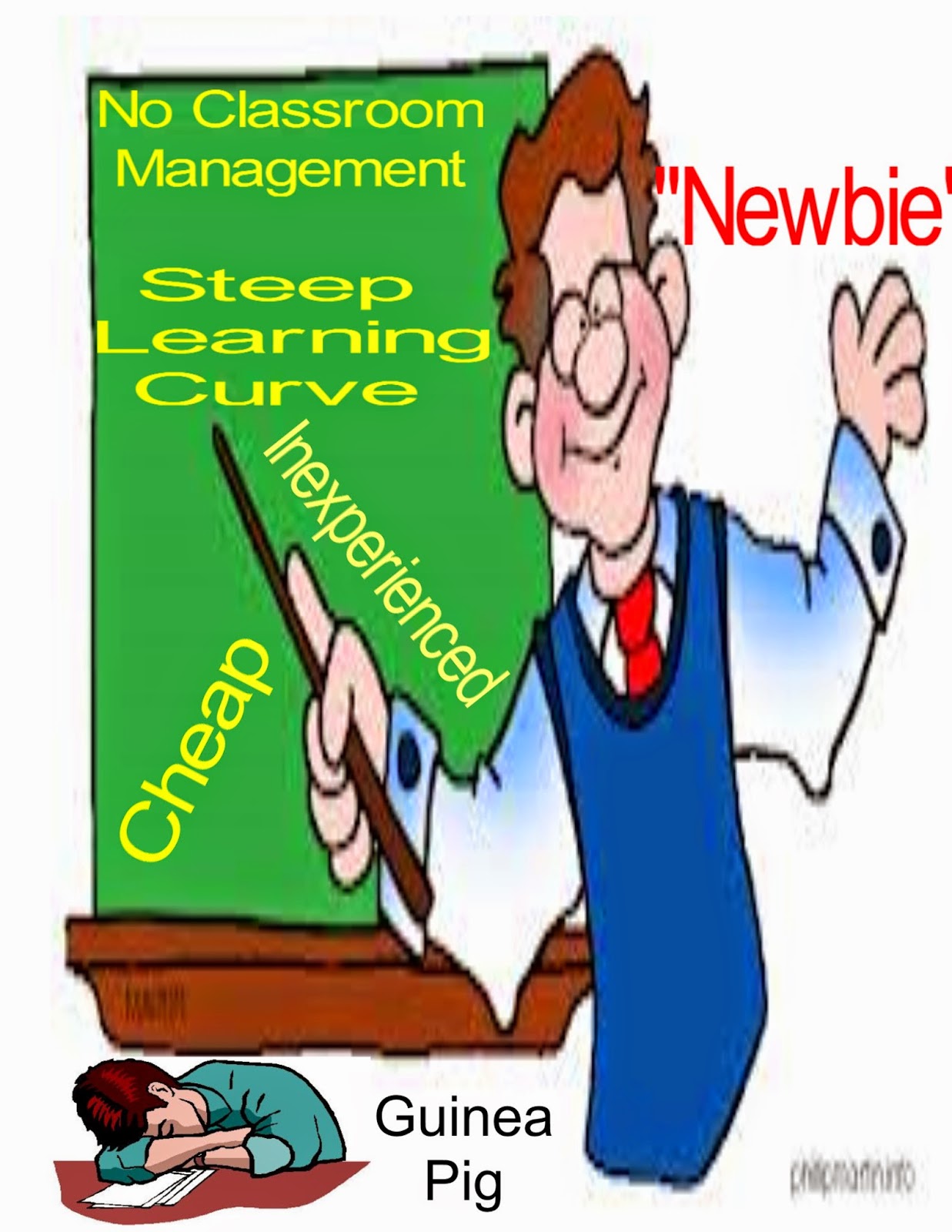 One of the issues the news media fails or doesn't want to discuss is how the NYC public schools have been shortchanged of needed resources and the questionable funding priorities the DOE has taken that finds most every school struggling to provide the proper educational services for their students.  Despite a 26 billion dollar budget, the DOE, has reduced the average school budget by 14% since the 2007-08 school year despite the fact that the DOE's own  budget had increased 39% since that time.  Furthermore, and shockingly, the disappointing Chancellor, Carmen Farina, froze school budgets at least year's level, adding to the financial pain at the schools.  Where did the increased funding go?  Obviously, not to the schools and the students.  Let's look at the various items that have been part of the DOE's "education on the cheap " policy.

School Budgets:  Every school I was in last year claimed they were short of resources.  In many schools, teachers had to buy their own classroom supplies, even copy paper!  Photocopy machines and smartboards lay broken for weeks at a time.  In the schools where there is an active and engaged PTA, the fundraising by the group pays for things such as class trips, and technology upgrades, taken for granted in the suburbs. When the disappointing Chancellor shocked everyone by freezing the already inadequate and tight school budgets, it just adds to the financial squeeze that the schools are in.

Librarians:   Many schools either don't have a librarian or have a part timer in the school library.  Once, every school was required to have a full time librarian.  In many of the Bloomberg small high schools, there is no librarian and the libraries that once was a hallmark of the big high school is usually locked and unusable to the students.  The problem is so acute that even the Commissioner of NYSED has required that the DOE hire librarians.

Guidance Counselors: The lack of enough Guidance Counselors  in schools has become a real issue for the majority of schools.  Guidance Counselor caseloads of 400 or more students are commonplace. Students are lucky if they see their Guidance Counselor more than once a semester.  How many students fall through the cracks when these students are not able to develop that close personal relationship with a trusted adult trained to help them because of the infrequent contact between the two?  Worse, the DOE unwisely decided to assign ATR Guidance Counselors to a weekly rotation, making them useless to the school's Guidance Department.  Finally, some principals  brought in poorly trained and low paid community relation specialists that simply provide a bandage to an infection. The City Council has told the DOE to address this situation through their Education Committee.

Sixth Periods:  It seems that most every high school I was in had a significant number of teachers teaching a "sixth period".  While some of them were actual "shortage areas", most of them were teaching a "sixth period" as a way for the school to hire less teachers.  Many of these teachers were paid "per session", if it wasn't a shortage area or was outside their school schedule.  In quite a few cases, Earth Science programs were being taught by non-certified Earth Science teachers and schools went from a 5-1 to 4-1 Science program as a way to reduce the amount of Science teachers, even when Regents scores and passing rates plummeted as a result of the change.

disappointing Chancellor failed to do so.  Class sizes in New York City are the highest in the State and will remain unacceptably high for the foreseeable future.  Oversized classes are once again in the thousands with an estimated 3,500 in violation of the contract, according to the UFT website.

Principal Quality: approximately 20% of all New York City Public School principals came from the infamous "Leadership Academy".  Many of these principals have limited classroom experience, some never earned tenure!  Their primary concern is their budget and to intimidate staff.  They have little idea how the classroom environment works nor do they care.  To them its about the bottom line, test scores, keeping their "Children First Network" happy, and using funds as they see fit.  Its not about the students, its about the budget.

Bloated Bureaucracy:   It goes without saying that too much money is paid out to high priced consultants, accountability experts and lawyers.  Furthermore, the schools are forced to choose and fund the useless and money sucking "Children First Networks" that provides little real support to the schools.  Finally, the lack of transparency at the DOE makes the flow of funds hard to trace and that's why we end up with stories like this as the DOE rarely holds themselves accountable.

Fair Student Funding: Probably the biggest reason for the failure of New York City schools to show real and relevant academic improvements since it encourages Principals to hire the "cheapest" and not the "best" teachers" for their students.  Case in point, the City hired 6,000 new teachers this school year, while most of the 2,000+ ATRs couldn't even get interviews, especially, the ATRs who have ten or more years in the system.

If the City was really serious in improving student academic achievement, they need to centrally and fully fund the New York City Schools and under the new Mayor and disappointing Chancellor, its not happening, at least for another year.

It's up to the organization, that we pay to represent us, to fight against everything you've listed. The opportunity was there during the contract negotiations. Nothing was done. We can shout and scream into our cell phones but our batteries are dead. Perhaps blogs like this can help recharge them, but many will simply throw the phone away and get a new career, (which is what city, state and national municipalities want). The union doesn't care - it'll keep collecting dues at the revolving door - if that can be changed, this can all be stopped. The UFT should be denied dues from any one with under 7 years of service. Mulgrew would then breakout of his penthouse ! Of course, it's a pipe dream, but I personally will vote for anyone who is not pledging allegiance to King Mulgrew and his Unity Party.

I guess you can't read, if you could, you would see that there different but then again, you never provide any relevant information.

What do we really loose if we leave early after becoming vested? Who knows the answer to this question? How much do we need to have saved in the TDA to live and leave early.

The answer is very simple. If you want a DECENT pension, then you must complete 20 years to get the 2% per year for a total of 40% of your final average salary. Retiring before you complete 20 years will result in a substantial LOSS to your pension.

As for TDA, if you retire early and then wish to cash out your TDA....you have a HUGE penalty. It's real bad.
To avoid penalty, I believe you have to be 59 1/2.

I wish we had Deputy Chancellor Dorita Gibson on record when she said "... well we know there was nothing ever fair about Fair Student Funding." at a Staten Island UFT meeting.

The NYCDOE created the FSF or Fair Student Funding Formula in May of 2007. This is where the DOE now plays a mouse game giving certain schools money and others not. This is the system that allows principals (mostly idiot bloomberg leadership academy drones) the ability to control their own budget instead of the budget controlled by central. This has resulted in principals going on the cheap and hiring cheap, inexperienced teachers, 1 or none guidance counselors and very few if any social workers in their schools due to budget restraints now. So, who suffers from the FSF formular?? You guessed it right its the students....but...the DOE claims "STUDENT FIRST" hmnnn you decide readers. Thank you

Hi Chaz,
You should look into what will eventually cause a student and/or teacher to killed inside a NYC public school- restorative justice. Part of the agenda is no metal detectors, very limited suspensions,and less safety officers.
There's an article on this recipe for disaster in today's NY Times.

Restorative justice is tantamount to playing Russian roulette with students and teachers. Even Bloomberg knew that! Schools will quickly become much more dangerous, for teachers and students. There's a reason for metal detectors. Idealism and political correctness is fine and dandy, but it'll get you killed in the Bronx.

The TDA follows the same rules as a 401K. If you withraw early (before age 59 and a half) there is a ten percent penalty plus you pay tax on the remainder.
How much you have in the TDA when you retire is based on your contributions plus how the money is invested. currently, the fixed TDA plan is paying 7% interest - which is hard to match with any other plan.

Thank you for sharing such great information. can you help me in finding out more detail on top cbse schools in pune