The Thinning Of The Herd Against ATRs Are Beginning. 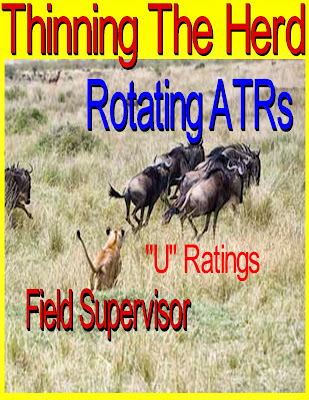 I have been called by a couple of panicky ATRs who have told me that they were served with their 3020-a papers this week.  In all the cases they are being charged with incompetence as they received two consecutive "unsatisfactory" ratings for the 2013-14 and apparently the 2014-15 school years, even though the year is not yet over.

In all the cases two different field supervisors have rated the ATRs as "unsatisfactory" and will claim that they offered a "plan of assistance" at the teacher's 3020-a hearing.  However, the field supervisors "plan of assistance" is simply a piece of paper and offers little real assistance to a teacher that rotates into different schools weekly, or monthly and who knows little of the students they are supposed to instruct.  Moreover, since the ATR has no ownership of the class or their grades, many students in poorly performing schools (and there are many) simply refuse to follow directions, knowing there is no consequence for their refusal to do the work.  Even the best teachers put into the position of the ATR would have trouble maintaining stringent classroom management and getting all the students to follow directions.

Now these poor souls will be put through the 3020-a process during the 2015-16 school year and if my suspicions are correct, will be in great danger of being terminated by the new, more stringent 3020-a procedures against educators currently being implemented by the DOE and UFT, where the burden of proof appears to shift from the DOE and to the teacher in a secret February 24, 2015 meeting as reported by Betsy Combier in her blog.

While I believe even under the newly tweaked and less favorable 3020-a process, it still will be difficult to terminate these teachers since the teacher can show that the "plan of assistance" was simply a ploy and lacked real substance in helping the ATR to become a better teacher.  Hopefully, the NYSUT attorneys will aggressively blow gaping holes in the bogus "plan of assistance" and bring out the problems of instructing a class that you don't even know the names of the students to save these ATRs who are charged with incompetence their jobs and the retro pay they are entitled to.


The DOE's goal for  'thinning of the herd"of the ATR pool is now in overdrive and we can expect many more horror stories of ATRs being served with their 3020-a charges until the end of the school year.
Posted by Chaz at 8:14 PM

Can we get the names of these Atr supervisors who rated the teachers unsatisfactory?

Are these ATRS veteran teachers with many years in the system and the DoE is trying to force them into retirement by using the 3020-a tactic? Just wondering.

Do you actually believe that entering a corrupt and ghoulish kangaroo court stacked with ravenous vultures called lawyers, that anyone would stand a chance?
Remember this simple fact.The ATR pool has diminished due process rights. This is an abrogation of our fourth and fourteenth amendments.
Couple that with the fact that the union will only defend a measly thirteen percent of its members. Include the fact that everything's about firing us, and there you have it. That is the endgame of both entities. The UFT and the DOE.
The only proper approach is to sue for injunctive relief and damages. This would best be conducted on a Federal Level, since this is our rights were talking about.
Nothing good comes from playing in their shady administrative trial shakedown operation. Sue both legal entities and their agents.

The Union is definitely complicit. Betsy's FOIL will prove it.
When a union allows the employer to do as it wishes with its members, there is no reason to have that union. Disenfranchise it. 2/3 is needed. Throw them out and start from scratch.

There is no due process clause in the fourth amendment. perhaps you were thinking of the fifth

I bet one of those supervisors is James Quail.

I think people have to come to the realization that we, as ATRs, are on our own. Rely on no one but yourself. Don't use the DOEs lawyers.

Once again who are these atr supervisors who rated them unsatisfactory?????
We need to know who they are so we can protect ourselves better.
This blog should expose them for the good of all us!!!!!!!
Who are they what are there names???

The reason the 3020a notices are being given now is because the hearings will be over in 90 days. Thus, those ATRs will be off the payroll for good before the beginning of the school year (facilitating a public announcement of a shrinking group). It's also the reason so many part time ATR supervisors have been hired. It's also the reason the UFT doesn't want ATRs to have their own chapter. People should start waking up to these facts and start saving for a good lawyer.

Chaz - Rotating ATRS are still rated using Teaching for the 21st Century and the 3020 a process should be the traditional one. The burden of proof shift to the teacher is under the new evaluation system that ATRs are not subjected to unless we spend six months in a school as a regular teacher. Just read Teaching for the 21st Century and there is no way a rotating ATR should lose. I know the system is not exactly fair but I could poke holes in DOE violations of policy easily.

Normally, I would agree with you here. However, it seems that the UFT/DOE February meeting with the arbitrators may have shifted the burden of proof slightly toward the educator.

The rumors I have heard about what was discussed seem to support the shifting of the burden of proof away from the DOE and toward the teacher.


So if provisionally placed ATRs are not considered ATRs by the DOE and UFT, why do they have a expedited dismissal process? Shouldn't they have the same rights as all teachers, or the same rights as the rotating ATRs?
The Union and DOE argue that these teachers aren't ATRs, so why do they have diminished due process rights? It seems they are purposely being perilously placed by accepting (or being forced to take) a position.

Question is what the law says, not what was said at a meeting. For regular teachers under Danielson-MOSL, burden of proof has shifted to us after two ineffective ratings. I wrote about this coming years back. ATRs, however, are still rated under the old system by law and contract. How can rules be made at a meeting that are contrary to the law? This is hard to understand. Is there yet another loophole? Please share it so we can properly prepare people. I believe anything is possible these days but would like to know the legal justification for rating ATRS under the old system but charging us with incompetence under the new one.

I can only tell you what I was told and that was they are making an effort to go after ATRs and tweaking the 3020-a rules to reduce teacher due process rights, even under the old system.

It's so unfortunate that most people are not familiar with the decisions of the Commissioner of Education:

"The panel, in a commentary on respondent’s teaching and questioning techniques, stated that there were no absolutes in teaching, and that respondent had to be evaluated for effectiveness."