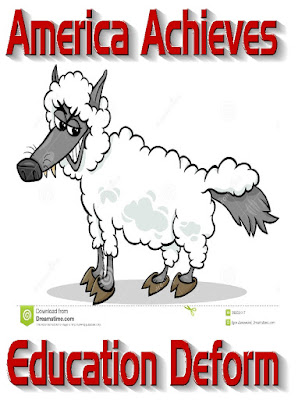 In Chalkbeat I read an article by two elementary school teachers who rightly complained that Special Education students should not be graded on tests that are inappropriate for their students.  Obviously, I and many others agree with these two teachers.  In fact, the highly regarded NYC Educator, has written about how inappropriate the tests are to his recent immigrant students over the last year.  However, what struck me was the fact both teachers who wrote the article are part of an organization called "America Achieves".  I had never heard of this organization and decided to Google it.  Sure enough this organization is funded by Bloomberg and Gates and other education reform supporters.  What does "America Achieves" support? Let's see.
That's right, all the issues that education deformer groups like Education 4 Excellence, StudentsFirst, and Teach 4 America support.  Quite incidentally, all funded by education deformer supporters like Bloomberg and Gates.  Here are some articles about "America Achieves',  Here, Here, and Here  As you can plainly see, this group has education deform written all over it.  While "America Achieves" is most notable in representing teachers who work in charter schools in places like New Orleans, and Detroit, they have made inroads in our State as well as the Chalkbeat article shows.

While I may have serious issues with our own union its still far better to be represented by a union than rely on these education deformer groups like "America Achieves" and Educators 4 Excellence who simply are sock puppets for organizations that want to destroy the public school system and the unionized teachers that work for them.


Beware of the wolf in sheep's clothing and "America Achieves" appears to be a wolf disguised as a sheep.

Beware of the Trojan horse.

25/55 will give you a 50% pension. based upon the FAS (Final Average Salary). Usually your last three years. However, that assumes that you have been paying the extra 1.84% a payche3ck to be in the 25/55 program. Otherwise you would take a 28% hit by retiring at 55 with less than 30 years of service.

The equation is as follows{

According to the data you provided, you are Tier VI which started on April 1, 2012 and not eligible for the 27/55 program. However, maybe you were retroactively had Tier IV credit. If that is the case then you would be automatically be enrolled in the 27/55 program and not the 25/55 program.

The 25/55 window was only open to active members in 2008 and anybody under Tier IV hired after March 1, 2008 were automatically enrolled in the 27/55 program. The difference is two years. See below:

Thanks Chaz,
I am tier 4 because I was already in the state retirement system and the BOE retirement system as tier 4 because I used to sub in both long island and the city. I read your link but am still a little confused, I just want to double check on what I was told by TRS because I trust you more. If I started at age 28 and work 27 years I should be able to retire on a full pension at 55, but if I started at age 29 it would be 56, right? Also, I remember one of your posts saying newer tier 4 teachers have to wait 15 years for the lifetime health benefits?